Coverage of a 2013 video showing MIT professor and Obamacare adviser Jonathan Gruber talking about the "stupidity" of American voters has varied greatly by cable network, a review of closed captioning information shows. 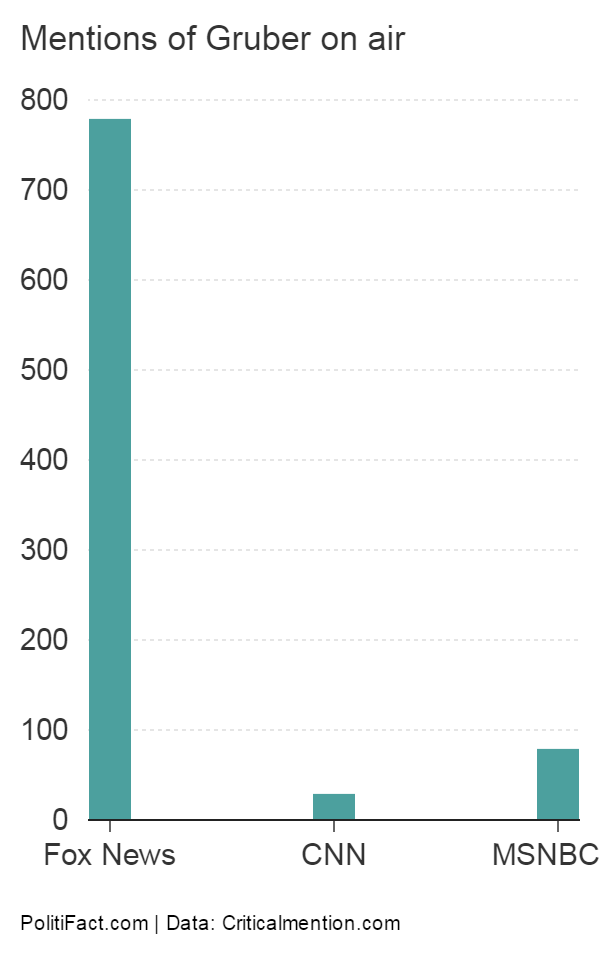 Since Nov. 10, Fox News Channel has referenced Gruber at least 779 times on air, while MSNBC has referred to Gruber 79 times. CNN has mentioned Gruber just 27 times over the same period.

A mention is defined as any time Gruber’s name is said on air within a one-minute window. The numbers are all likely higher because they don’t account for errors in the closed captioning transcription.

Gruber spoke at a 2013 conference at the University of Pennsylvania. His remarks addressed the idea of a "community rating," the notion that health insurance is least expensive when everyone -- sick and healthy, old and young -- is required to buy health insurance.

Doing it this way keeps rates down by sharing health care costs across a larger population, but it typically requires forcing people to have health insurance through a mechanism like penalties for refusing to purchase insurance, which the law includes. Gruber also addressed how various aspects of the law were massaged in order to make the law more palatable to lawmakers and, ultimately, to voters.

Here’s the full version of what he said, beginning at about the 20:30 mark. "Mark" refers to Mark Pauly, a fellow health care economist who was on the panel with Gruber.

"Mark made a couple of comments that I do want to take issue with -- one about transparency in financing, and the other is about moving from community rating to risk-rated subsidies. It’s just -- you can’t do it, politically. You just literally cannot do it. Not just transparent financing but also transparent spending.

"This bill was written in a tortured way to make sure (the Congressional Budget Office) did not score the mandate as taxes. If CBO scored the mandate as taxes, the bill dies. Okay? So it's written to do that. In terms of risk-rated subsidies, if you had a law which said healthy people are going to pay in — you made explicit that healthy people pay in and sick people get money — it would not have passed. Okay? Lack of transparency is a huge political advantage.

"And basically, you know, call it the stupidity of the American voter or whatever, but basically that was really, really critical to get the thing to pass. ... Look, I wish Mark was right that we could make it all transparent, but I'd rather have this law than not. … Yeah, there are things I wish I could change but I’d rather have this law than not. And I think that involves some trade-offs that we don’t prefer as economists but which are realistic."

This prior fact-check from PolitiFact explains Gruber’s involvement in crafting the law. We’ve also interviewed him from time to time as an expert on the law.