When the U.S. goes to war, TV networks call on the warheads

The United States bombing of ISIS targets in Syria has given cable news' military analysts plenty to talk about. Learn more about them in our special report.

When President Barack Obama decided to drop bombs in Iraq this month, television news turned to a group of familiar faces to decipher the plan for viewers. 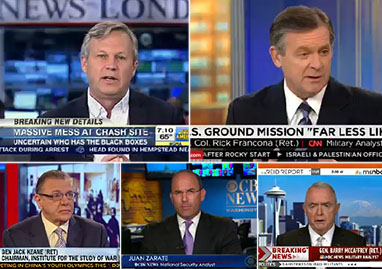 On MSNBC it was retired Army Gen. Barry McCaffrey, commander of "the 24th Infantry Division during the first Gulf War."

Francona, Keane and McCaffrey are three of TV’s "warheads," a prestigious group of military analysts who are handsomely paid to offer authoritative straight-talk on the chaos unfolding in Iraq, Ukraine and Gaza.

But who are they, really? And how were they chosen to analyze military situations on the other side of the world?

PunditFact went in search of answers. What we we found was a lot of dead ends.

PunditFact, a project of the Tampa Bay Times and the Poynter Institute, contacted about 20 military analysts recently interviewed on one of the major news networks -- ABC, NBC, CBS and Fox. Most didn’t respond to our calls or emails. Of those that did, the majority didn’t want to talk.

Why would people who work alongside journalists not want to talk to one?

Many are still upset over a Pulitzer Prize-winning New York Times investigation in 2008 that alleged conflicts of interest among many of the analysts who emerged during the wars in Iraq and Afghanistan.

The New York Times uncovered a special Pentagon program to coach analysts with private, top-level briefings and paid tours of Guantanamo Bay, Cuba, and Iraq. The investigation also revealed many of the analysts had undisclosed business connections to defense companies that could benefit from the wars they were invited to analyze.

The allegations spurred investigations by the Defense Department inspector general and the Government Accountability Office, none of which found the Pentagon violated the law. That did not change most warheads’ minds about talking with reporters.

"I’m not talking to reporters now," said retired Air Force Lt. Gen. Thomas McInerney, a longtime Fox analyst, in a brief phone conversation with PunditFact. Why not? He talked to the New York Times and "landed myself on the front page in a story full of crap."

The New York Times singled out McInerney as sitting on the boards of defense contractors and soliciting talking points from the Pentagon.

"Once is enough for me re: talking to reporters!!! There's always another agenda," Fox analyst and retired Navy Capt. Chuck Nash said in an email to the fraternity of warheads (which we were copied on).

Asking about the story now is like asking "how much were we affected by Vietnam," retired Army Col. Kenneth Allard told us. Allard wrote about his experiences as an NBC military analyst in the 2006 book Warheads: Cable News and the Fog of War.

None of the most frequently featured analysts in recent weeks -- McCaffrey of NBC, Francona and retired Army Gen. Mark Hertling of Orlando of CNN, Keane of Fox, and retired Marine Col. Steve Ganyard of ABC -- would talk to us about their work.

But the networks that pay them are even more secretive. None would explain the process by which they vet and select military analysts.

Allard said the networks also were stung by the New York Times story, accused of not doing enough due diligence in screening analysts’ business interests.

So what do we know?

Retired officers billed as network analysts or contributors have exclusive contracts that bar them from appearing on rival channels. They are paid by the segment, and paid well, said retired Marine Lt. Col. Bill Cowan, a 12-year Fox News analyst who retired from the Marines in 1985 after a tour in Vietnam and specializing in intelligence.

Cowan says Fox prevents him from saying how well, but it’s enough to make him consider driving a couple hours to a studio from his rural North Carolina home. "During the height of the (Iraq) war, I got paid a lot," Cowan said.

Networks value analysts who can adjust to a news topic as it breaks, so Cowan stays ready and comfortable by "endlessly" following the news all day and traveling on his own to places such as Jordan, Turkey, India and Egypt.

Still, they also want a talking head who can keep viewers glued.

"It’s about business, and if somebody can look good on TV and present themselves well and have somewhat of a convincing pitch to a relatively naive audience, that’s all the networks care about," Cowan said. "Just because you’re a general does not mean you are qualified to go on television and talk."

To help you know the current crop of warheads, we’ve attached bios of the most frequent guests to this story.

Paid pundits are valuable in breaking down complex military operations because most have been there, said Lt. Col. Ralph Peters, a Fox "strategic analyst" and former military intelligence officer who briefed senior staff on breaking events.

Peters told us he doesn’t have any special access to the Pentagon for information and that he relies on colleagues -- in uniform and out -- to provide him context and information about ongoing military operations.

He said he returned our call because he so strongly believes that military pundits be free from influence of the administration (no private defense briefings, no junkets) and financial ties to companies. In other words, "you’ve got to be more Catholic than the pope."

"I really don’t think the problem with military analysts is expertise. They’ve got the expertise," Peters said. "The problem is agendas. And it’s much less of a problem than it was."

Meet the warheads
A look at the military and intelligence analysts who appear freqeuntly on each network.

The basics: Joined the Air Force in 1970, leaving after 28 years with the rank of lieutenant colonel. Speaks Arabic. Served with the National Security Agency, the Defense Intelligence Agency and the CIA. Personal interpreter for Gen. Norman Schwarzkopf. Of note: Francona wrote about Iraqi use of chemical weapons in the late 1980s during the Iran-Iraq War. Initially, the United States pulled back its military support for Iraq. "The halt was short-lived," Francona wrote. "After a series of meetings in Washington, it was decided that it was more important to ensure that Iran did not emerge victorious than to refuse to assist the Iraqis for their chemical attacks on the Kurds." Post-military: Consulted with government and private firms. NBC analyst 2003-08. Hired by CNN in 2013.

The basics: Served in the Army from 1964 to 1996, retired as a four-star general. Served in Vietnam, was an  infantry commander in the first Iraq War and became the commander of American forces in Latin America. Named President Bill Clinton’s "Drug Czar" from 1996-2001. Of note: In 2003, soon after the Iraq War began, McCaffrey criticized the Bush administration for sending too few troops and especially for disbanding the Iraqi military. "This is a 400,000 man army that disappeared into thin air, was never engaged or defeated on the battlefield," McCaffrey said at the time. "That was a stupid thing to do." Post-military: Began a lucrative business connecting defense contractors with Pentagon and other government officials. A 2008 New York Times investigation included McCaffrey as one of the targets of a Pentagon "charm offensive" that offered access in exchange for favorable coverage.

The basics: Retired four-star general who served in the Army from 1966-2003, commanding troops in Somalia, Haiti, Bosnia and Kosovo. Of note: Keane was an architect of the Iraq "surge," an infusion of many thousands of troops into Iraq coupled with funding of Sunni tribal defense. The surge ultimately rolled back insurgent forces. Keane had the ear of President George W. Bush. Post-military: Remained a close adviser to the Bush administration and made several trips to Iraq and Afghanistan on its behalf in 2007 and 2008. He sits on the boards of General Dynamics and MetLife. Joined Fox in 2011 after working for ABC.

The basics: Joined the Marines in 1980, became a fighter pilot and retired with the rank of colonel in 2008. Of note: Generally comments on aviation stories. Post-military: Ganyard shifted from the Marines to the State Department where he became a Deputy Assistant Secretary of State and oversaw global political-military programs from 2007-09. He is president of Avascent, a firm that advises companies in the aviation, defense and intelligence sectors.

The basics: Zarate is a former federal prosecutor who held several anti-terrorism positions during the administration of President George W. Bush. Of note: In 2003, used an obscure clause in the Patriot Act to target banks that served as financial go-betweens for North Korea and later, Iran. Post-White House: Zarate is a senior adviser to the Center for Strategic and International Studies and also sits on an advisory boards at the National Counterterrorism Center and the international bank HSBC. He has been a national security analyst with CBS since 2009.