Joni Ernst's bread bags: Iowans give us their take

Sen. Joni Ernst, R-Iowa, gave the 2015 GOP rebuttal to the State of the Union.

To give the Republican rebuttal to President Barack Obama’s State of the Union, Republicans put forward freshman Sen. Joni Ernst of Iowa. Her response started with a childhood memory that got people talking.

"We were raised to live simply, not to waste. It was a lesson my mother taught me every rainy morning," Ernst said.  "You see, growing up, I had only one good pair of shoes. So on rainy school days, my mom would slip plastic bread bags over them to keep them dry. But I was never embarrassed, because the school bus would be filled with rows and rows of young Iowans with bread bags slipped over their feet. Our parents may not have had much, but they worked hard for what they did have."

Cue the inevitable jokes. Comedian Jon Stewart said it was more of "an application essay to Nostalgia University" than a State of the Union response. People on Twitter used the hashtag #BreadBags and posted pictures of shoes shaped like bread loaves. There was even a "Simpsons" reference -- the bartender character Moe Szyzlak once donned two Wonder Bread bags on his feet. Some wondered, though, if kids in Iowa really did wear bread bags over their shoes.

But the quick anecdote resonated with Ernst’s constituents.

Here at PolitiFact, we couldn’t resist looking into her comments on bread bags. We won’t be putting them on the Truth-O-Meter, but we thought our findings were interesting nonetheless.

Ernst, 44, lives and grew up in the southwestern Iowa town of Red Oak, where her family has a farm. (A campaign ad featuring Ernst talking about castrating hogs brought her to the national stage.) It’s a small town, with a population of about 5,600, about 53 miles southeast of Omaha, Neb. 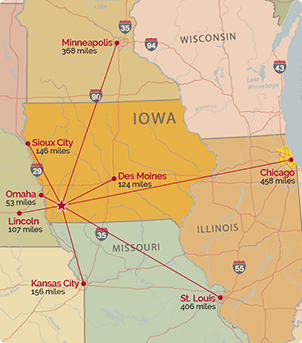 Red Oak is historically a farming area, though they’ve seen factories come and go, said David McFarland, director of the Montgomery County, Iowa History Center and a farm owner. McFarland moved to Red Oak in 1974, and his wife Roxanne is related by marriage to Ernst’s family.

McFarland doesn’t remember bread bags over shoes as being an everyday occurrence. You’d most likely see a school bus full of kids in bread bag-covered shoes on picture day or some other special occasion, he said.

"You wore your best, so you wouldn’t want to get your shoes muddy and stuff," McFarland said.

Even if it’s possible Ernst was exaggerating a smidgen about the widespread use of bread bags as a shoe cover, McFarland said the anecdote captures rural Iowa and its "down home values."

James Hoskinson, a member of the Red Oak Historical Commission sent us some lighthearted comments from a local Facebook thread following Ernst’s remarks. One person said, "I have to disagree with Joni on something. I wore the bread bags, too. But I was embarrassed. … mine were generic. The cool kids got Wonder Bread."

Dawn LeRette, a Red Oak funeral chapel owner and close friend of Ernst, grew up in the 1970s on the outskirts of town and said the plastic bread bags were key to bracing the Iowa climate. She remembered wearing them on the inside of boots, not the outside.

"It rains here, it snows here," LeRette said. "We put them in the liner of our boots so our feet wouldn’t get wet."

In her remarks, Ernst said she used the bread bags to protect her one pair of good shoes -- to demonstrate that her family didn’t have much money.

LeRette said that as a kid, she didn’t think of the practice as an indicator of wealth. Rather, it was a sign of character.

"It says that you’re resourceful, you’re genuine with what’s been given to you," she said.

The story, which Ernst used often on the campaign trail, resonated with Shirley Billings, a paralegal and member of the Red Oak Historical Commission, who has lived in Red Oak since she was born there in 1938.

It reminded Billings of other ways people growing up in Iowa and rural areas made ends meet. She said her late husband grew up "poor as a church mouse," putting cardboard in his shoes to mend holes in the soles. Her mother would make her clothes out of feedsacks. (For city folk, those are the fabric sacks animal feed comes in.)

From a purely political perspective, Christopher Larimer, a political science professor at the University of Northern Iowa, said rural Iowans of both parties can connect to Ernst’s story. For Democrats, it’s unlikely to give them more reason to support Ernst. They would find the bread bag story unremarkable. But for her supporters, it’s yet another endearing feather in her cap.

Incidentally, Larimer grew up in small-town Iowa and said the practice of using bread bags to keep your feet dry was not uncommon, though he hasn’t noticed it much in recent years.

To the city dwellers making jokes about the bread bags, McFarland said the anecdote shouldn’t convey to the rest of the country that they’re all "hillbillies running around with their shoes off."

"We have extremely intelligent people, scientists, doctors and these things," he said. The bread bag story is more symbolic and a sign of Iowa pride. "We deal with different things and different way of life than a lot of people do."