Donald Trump brings troublesome relationship with the truth to California

Donald Trump will bring his brash and boisterous Republican campaign for president to the Golden State this week. The New York billionaire and GOP frontrunner is Friday’s keynote speaker at the California Republican Party Convention south of San Francisco.

When Trump arrives, he’ll bring his well-documented and checkered relationship with the truth.

A win for Trump in California’s June 7th primary could cement his GOP nomination. A loss could lead to the uncertainty and potential chaos of a contested Republican national convention this summer.

PolitiFact California will examine the accuracy of Trump’s statements while he’s campaigning in the state. We will also be at the California GOP convention to cover speeches by Trump, and the other Republican presidential hopefuls: Texas Sen. Ted Cruz and Ohio Gov. John Kasich.

Trump is the final candidate we’ve profiled in our PolitiFact ‘Report Card’ series, which studies how the Republican and Democratic presidential hopefuls have fared with the truth. We’ve already examined the PolitiFact Truth-O-Meter records of Ted Cruz, Hillary Clinton and Bernie Sanders. 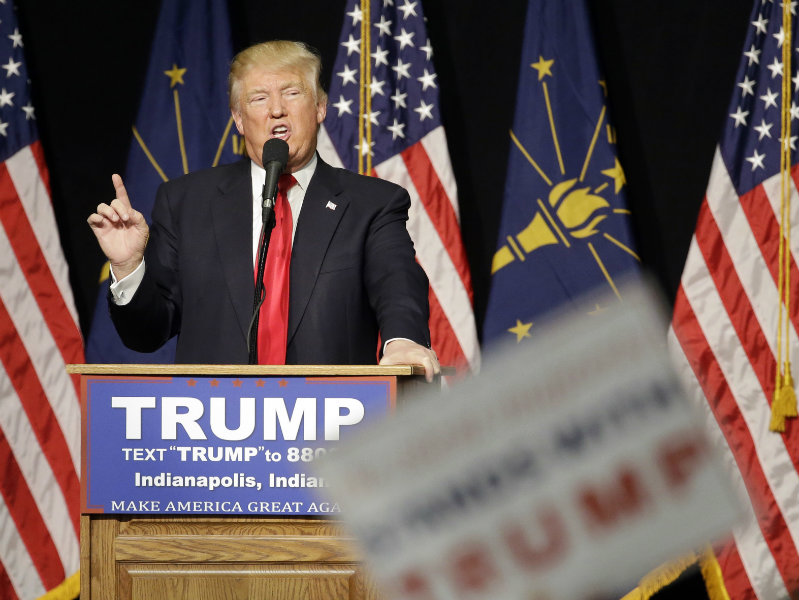 The GOP frontrunner has earned more Pants On Fire ratings for claims he’s made than any presidential hopeful PolitiFact has checked since it launched in 2007. Those ratings are reserved for only the most outlandish statements.

Trump has fared far worse on PolitiFact’s Truth-O-Meter than Clinton, the Democratic frontrunner. But Americans don’t seem to trust either one. Just 37 percent view Clinton as honest and trustworthy, according to a March ABC News/Washington Post poll. Trump scores even lower in that category, with just 27 percent saying he’s honest.

One example is Trump’s unfounded claim about "thousands of people" cheering in New Jersey after the 9/11 terrorist attacks.

"I watched when the World Trade Center came tumbling down, and I watched in Jersey City, New Jersey where thousands and thousands of people were cheering as that building was coming down," Trump said in November.

In its fact check on that claim, PolitiFact reported: "We conducted an exhaustive search of newspaper and television transcripts on LexisNexis, looking for reports from September 2001 through December 2001 that made any mention of Muslims in New Jersey celebrating the 9/11 attacks."

It continued: "While we found widely broadcast video of people in the Palestinian territories celebrating, we found no evidence to back up Trump’s description of events on American soil."

PolitiFact concluded: "Trump’s recollection of events in New Jersey in the hours after the Sept. 11, 2001, terrorist attacks flies in the face of all the evidence we could find. We rate this statement Pants on Fire."

PolitiFact has rated roughly 75 percent of the Trump statements it has examined as either Mostly False, False or Pants On Fire.

A look at Trump’s Truth-O-Meter 'Report Card,' as of late April, is available below. A up-to-date and dynamic look at the results is here.

"Most of the professional politicians we fact-check don’t reach these depths of inaccuracy. They tend to choose their words more carefully," PolitiFact editor Angie Drobnic Holan wrote in a New York Times op-ed in December.

PolitiFact gave Trump’s collective "campaign misstatements," the 2015 Lie of the Year, a dubious honor handed out each year by the website.

Even with Trump’s troublesome relationship with the truth, he has relatively strong GOP support in California, according to results from a poll in early April.

Trump was the choice of 39 percent of the state’s likely GOP voters, while 32 percent supported Texas Sen. Ted Cruz and 18 percent backed Ohio Gov. John Kasich, according to a Field Poll released April 7.

It’s a different story for the candidates among the state’s overall voting electorate. Seventy-four percent reported an unfavorable view of the developer-turned-reality TV star-turned-politician, while just 22 percent had a positive impression. Overall, 64 percent of voters had a negative view of Cruz and 25 percent had a positive view, according to the survey.

While many political observers wrote off Trump last summer, he continues to lead his rivals in the delegate race for the GOP nomination. California’s GOP voters could seal the nomination for Trump or favor one of his rivals, throwing the party into chaos this summer.

Contact PolitiFact California on Twitter @CAPolitiFact or email us at [email protected] with interesting or provocative claims made by presidential candidates while they’re stumping in California. We’ll review them for a possible fact check.