One year of fact-checking California, on-air and online

In its first year, PolitiFact California called out falsehoods and half-truths across the Golden State.

Capital Public Radio was privileged to launch PolitiFact California one year ago through our partnership with the Pulitzer Prize-winning PolitiFact. We are the first public radio station to partner full-time with the national website.

In our first year fact-checking the Golden State, we called out falsehoods and exaggerations, as well as verified some True statements, by state and national leaders, candidates for office and multi-million dollar ballot measure campaigns during the state’s 2016 election.

We rated very few claims completely True, and likewise we only caught a handful of Californians with their Pants On Fire! Ratings for most landed somewhere in the middle on PolitiFact’s Truth-O-Meter, either Mostly True, Half True or Mostly False. Altogether, we produced more than 60 fact-checks and a dozen articles online. We also turned many of our fact checks into broadcast radio stories, and discussed our findings on Capital Public Radio’s Insight talk show. 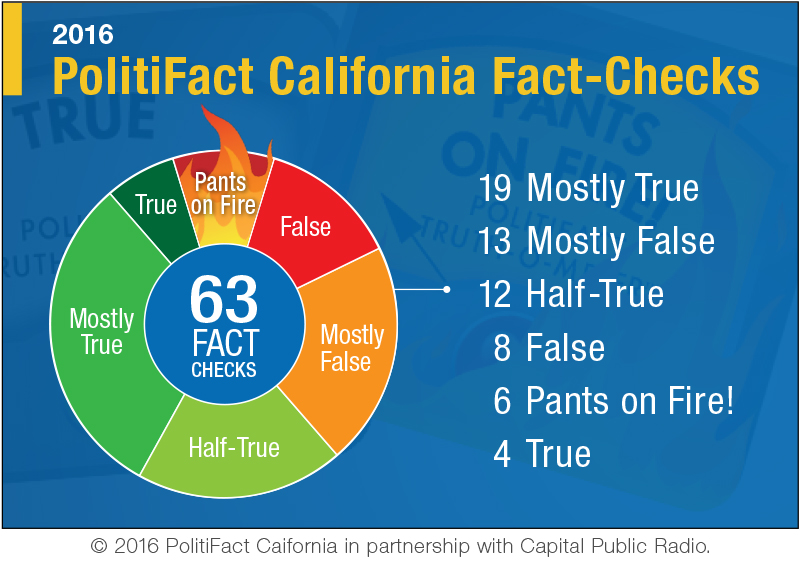 Here’s a closer look at PolitiFact California’s first year, including how our fact-checking process works, what we learned and where we’re headed in 2017.

No public figure is off-limits when they make eyebrow-raising claims in or about the Golden State: We’ve fact-checked President-Elect Donald Trump, Gov. Jerry Brown, newly-elected U.S. Sen. Kamala Harris and several members of the California Legislature.

So how did we do it?

We followed PolitiFact’s thorough process for fact-checking and rating each statement. We started by asking the person who made the claim for any evidence to back it up. Then we contacted experts, from law professors to research analysts to economists, and read pertinent government reports to independently verify or fully or partially debunk each claim. Each fact check includes a source list identifying the experts, articles and reports we relied on to build our case.

We followed one more key step before publishing: At least three editors and the PolitiFact reporter discussed the written fact-check in a ‘chamber’ meeting. The group then voted on the rating that best reflected the accuracy of the claim. 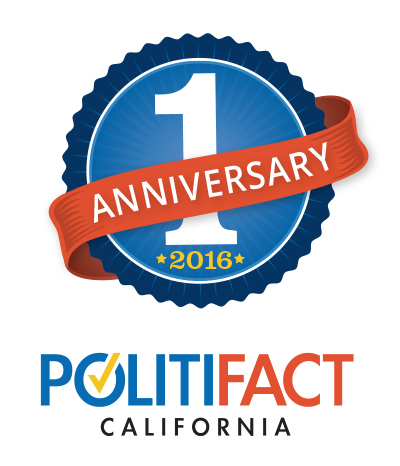 We took, and will continue to take, great care to get the facts right. But we have a strong commitment to transparency in our process. When we missed something, we issued corrections. PolitiFact California also considers new evidence and perspectives related to our fact checks, and revises our ratings when warranted.

Recently, for example, we changed our rating on a statement by Lt. Gov. Gavin Newsom from True to Half True. Newsom claimed in late July that Indiana Gov. Mike Pence had advocated for the controversial practice of conversion therapy. After hearing other perspectives from our readers, we completed a new analysis acknowledging there are more ways to interpret Pence’s stance on the matter.

What did we learn?

During our first year, we learned our audience has a strong appetite for calling out false claims, particularly on election topics.

Readers asked us to investigate statements made by candidates for office and by the state’s ballot measure campaigns. We responded by fact-checking claims at political conventions and during debates between candidates for U.S. Senate and Congress. We also produced 15 fact checks and three in-depth articles about California’s ballot measures.

One of the most provocative statements was from Democratic Sen. Dianne Feinstein. She claimed California’s pot legalization measure, Proposition 64, "allows marijuana smoking ads in prime time, on programs with millions of children and teenage viewers." While her claim had a whiff of truth, Feinstein ignored the fact that the federal government bans TV stations from advertising illegal substances. Even with the passage of the state’s Prop 64, marijuana remains illegal under federal law. We rated her claim Mostly False. 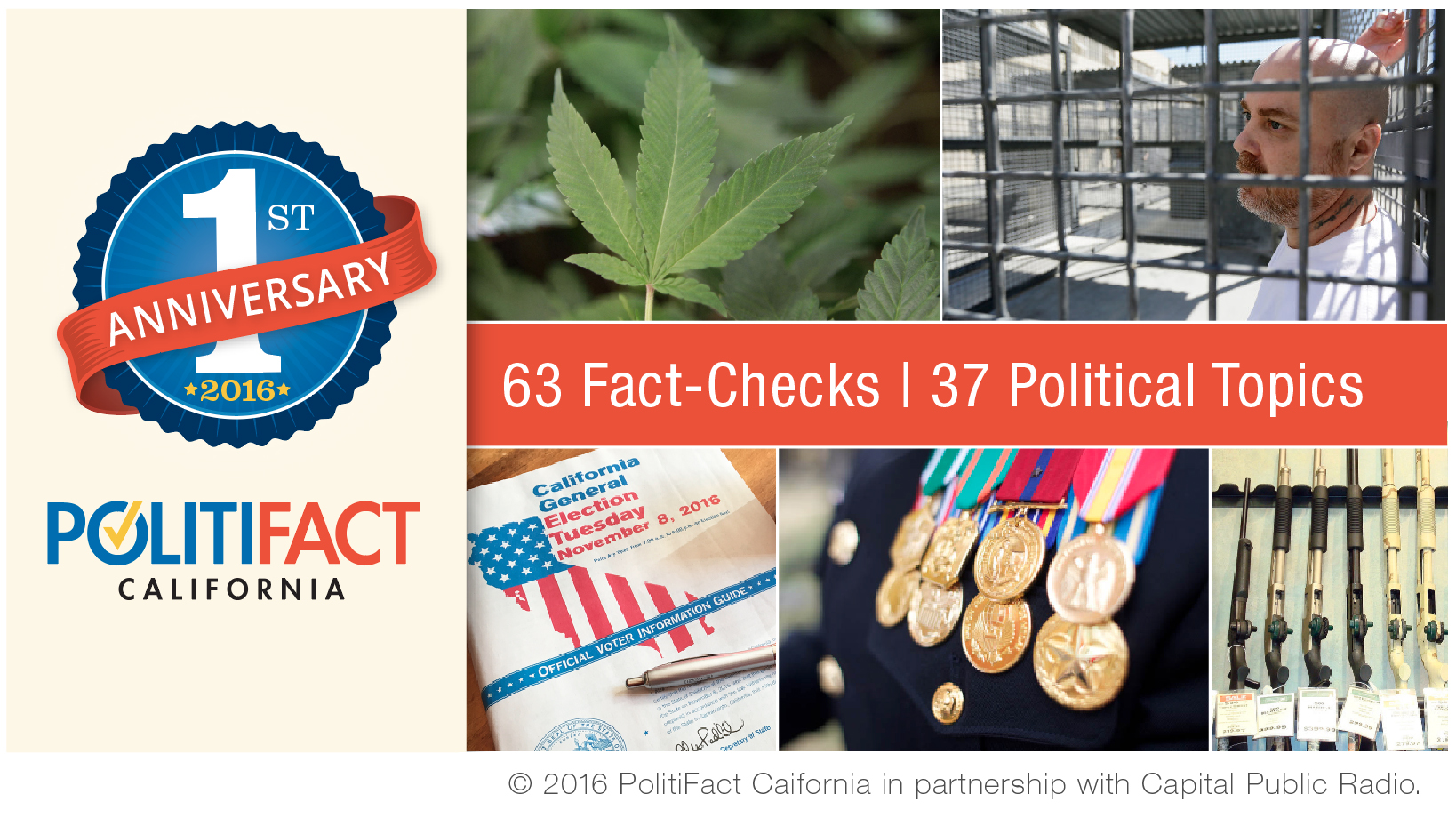 Our Truth-O-Meter buzzed to life again as we examined attacks by a tobacco industry-funded campaign against Proposition 56, the state’s proposed cigarette tax hike. After checking the facts, we gave a Mostly False rating to its misleading claims that Prop 56 "cheats schools out of at least $600 million a year" and that the bulk of its revenue would go to wealthy special interests. Following a pattern by California’s ballot measure campaigns, these claims included a small element of truth that prevented us from rating them completely false.

We also found a handful of outlandish claims that had no such nuance. Those, including the recent assertion by President-Elect Donald Trump of "serious voter fraud" in California, were so lacking in evidence that Pants On Fire was the only appropriate rating.

With the election over, PolitiFact California will continue to check the facts as our elected leaders govern the state and represent us in Washington D.C. We will keep a close eye on claims about issues such as immigration and climate change, particularly as California’s Democratic leaders plan for a showdown with the incoming Trump administration.

We’ll also closely watch statements by and about candidates on the growing list for California’s 2018 governor’s race, and on claims about the many bills introduced at the state Capitol. Finally, we will redouble our efforts to investigate claims made on social media, including Twitter and Facebook, as ‘fake news’ continues to spread and gain in influence.

As we move into our second year, we’d like feedback from you -- our audience. Whether you agree or disagree with our ratings, we’d like to hear your voice.

Pitch us your idea for a fact-check. Have you heard something that makes you say: ‘Is that true?’ If so, fill out a form here with your idea.

We’ll look for your comments and suggestions, and we’ll continue fact-checking California in 2017, both on-air and online.

We can rate as ‘True’ that PolitiFact California wishes you a Happy Holidays! 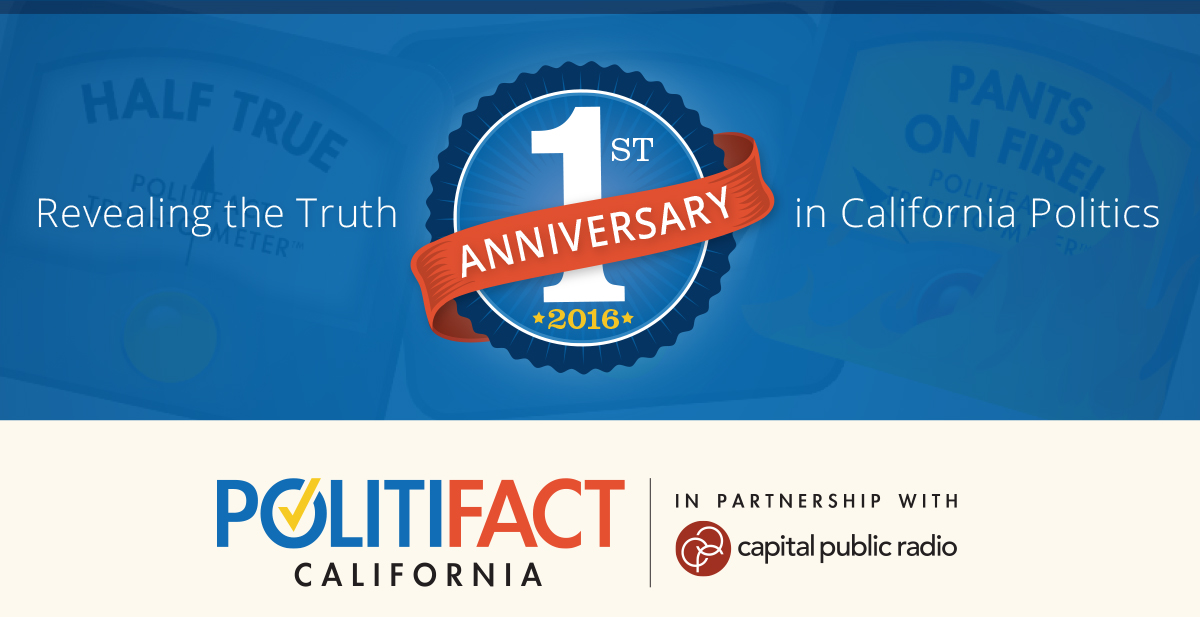