Readers sounded off after we found Mostly True an American history claim by Justice Don Willett of the Texas Supreme Court.

We checked Willett’s claim that the overwhelming majority of elite universities don’t require history majors to take even one course in American history.

After our story posted, a reader emailed: "So let me get this straight:

"The statement was, as you point out:  ‘...overwhelming majority of America's elite universities DON'T require history majors to take a course in American history?’ Correct? Yes or no?

"The question was NOT on how many students take history classes, correct ? Yes or no? This is something you came up with, yes or no?

"And the U.S. News & World Report, which you cite as your source for proof finds that 70% percent do not require it.

"And so, Judge Willett's statement is "Mostly True?" Why is it not completely True?"

Another reader called our rating of Willett’s claim illogical. "As I read the analysis," the reader wrote, "the statement Justice Willett actually made was judged to be completely True, but, because he could have made a related statement and did not , his rating is therefore not completely true. Did I read that right?

"That seems illogical because under such conditions PolitiFact should award no one a ‘True’ rating. Even a lengthy address will always omit some additional statement that PolitiFact could find could have been made but was not. In other words, bias is introduced when a certain rating is given based solely on a specific claim but at other times a rating is based on a specific claim plus some other statement that could have been included."

Another reader called this latest Willett fact check the "most disappointing analysis I have ever seen done by PolitiFact.

"Although you hinted that the ‘no longer require’ part of his statement was not supported, you seemed to ignore this in your ratings. I was a history major at an ‘elite’ college (as designated in the study), graduating in 1970. I did not have to "take" an American history course as I had AP credit for American history (1966 was the first year the exam was given at my high school). Thus I was, albeit technically, not required to take an American history course.

"Ultimately I did choose to take an American history course, Black American History, the first year it was offered, in a summer school course at another college. I would guess that a significant percentage of history majors today and for many years at elite colleges have AP credit for American History. … Because there is no evidence that things have actually changed, I think the appropriate rating would have been ‘Half True.’"

Another reader generally urged us to "keep up  the good work." Still, the reader wrote, "Most high school students in the U.S. are required to take a year-long course in American history (and in Texas, we take Texas history as well). So to require a generic U.S. history course in college would seem rather redundant--sort of like asking science majors to take General Science or med students to take Health."

He closed: "So, the question is, for the student with a passion for Chinese history, with 5,000 years of history to cover, plus probably with electives in Chinese literature, Chinese philosophy, and Chinese language, wouldn't it be a little unfair to force that student to sit through a course in American history like the one she took in high school?"

One more comment: "PolitiFact's unnecessarily fine-tuned rating of ‘Mostly True’ is not the point. The point is academia in our country, which relies on taxpayer funding to make their profession overly enriching, does not respect the hands that feed it!"

We absolutely respect our readers, especially counting on nudges when a claim comes up that might bear a fact check.

And now to some Twitter posts about our Willett check: 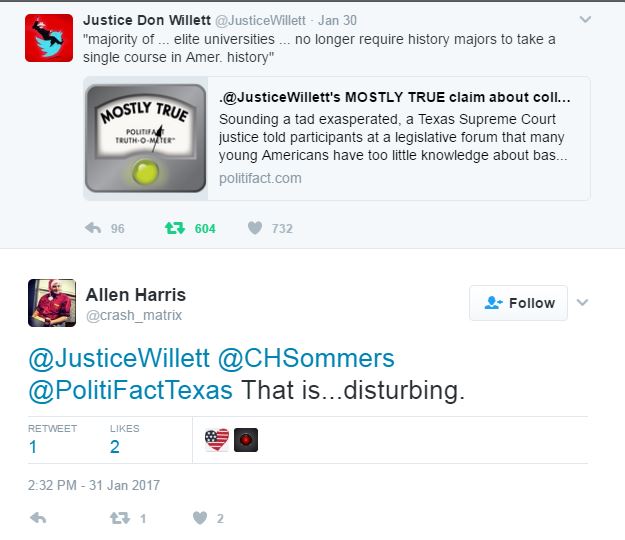