Since President Donald Trump pulled the United States out of the Paris climate agreement last week, reporters have pressed the administration about whether Trump believes in man-made climate change.

Again and again, top officials have sidestepped those questions or offered responses inconsistent with Trump’s record.

"Yes or no, does the president believe that climate change is real and a threat to the United States?" ABC reporter Mary Bruce asked Environmental Protection Agency Administrator Scott Pruitt June 2.

"All the discussions that we had through the last several weeks have been focused on one singular issue. Is Paris good or not for this country? That's the discussions I've had with the president. So, that's been my focus," Pruitt responded, sidestepping Bruce’s question.

Ambassador to the United Nations Nikki Haley faced the question on CBS's Face the Nation on June 4.

"The president believes the climate is changing, and he does know that pollutants are a part of that equation," she said.

But Trump’s comments from the past seven years show that he has long dismissed the scientific evidence that man-made climate change is real — going so far as to call it a "con," a "hoax" and "bull----."

In December 2009, Trump’s name appeared alongside other American business leaders in a full-page ad in the New York Times — uncovered by environmental media site The Grist — that actually praised then-President Barack Obama for his efforts to curb carbon emissions and fight climate change. 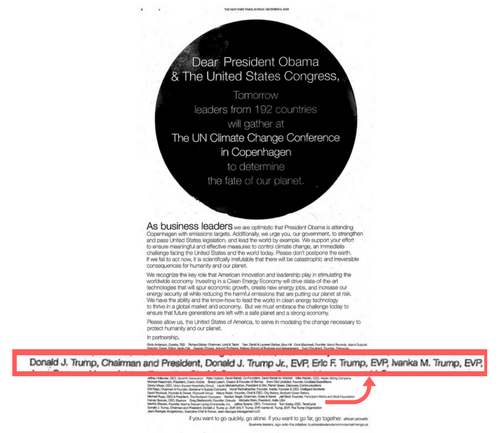 Something must have changed his opinion, though. Just a couple months later, in February 2010, Trump said, perhaps jokingly, that former Vice President Al Gore should lose the Nobel Peace Prize he won for his climate change activism.

He then told Fox News host Neil Cavuto that he was skeptical of climate change science because it might be a "con," and "a lot of people like me have been saying this for a long time."

Since then, Trump’s position has been pretty consistent.

Trump tweeted dozens of times between 2011 and 2014 about his skepticism — and sometimes outright denial — of climate change, especially when his hometown of New York experienced unseasonably cold weather.

"It snowed over 4 inches this past weekend in New York City. It is still October. So much for Global Warming," he tweeted in 2011.

It snowed over 4 inches this past weekend in New York City. It is still October. So much for Global Warming.

For the record, unusually cold weather does not negate climate change. There’s a difference between day-to-day weather in a particular location and the overall, long-term climate (and warmth) of the entire planet. That said, climate change could result in more extreme weather events, both hot and cold.

"Let's continue to destroy the competitiveness of our factories & manufacturing so we can fight mythical global warming. China is so happy!"

Let's continue to destroy the competitiveness of our factories & manufacturing so we can fight mythical global warming. China is so happy!

"The concept of global warming was created by and for the Chinese in order to make U.S. manufacturing non-competitive."

The concept of global warming was created by and for the Chinese in order to make U.S. manufacturing non-competitive.

"We should be focused on magnificently clean and healthy air and not distracted by the expensive hoax that is global warming!"

We should be focused on magnificently clean and healthy air and not distracted by the expensive hoax that is global warming!

"Give me clean, beautiful and healthy air - not the same old climate change (global warming) bull----! I am tired of hearing this nonsense."

Give me clean, beautiful and healthy air - not the same old climate change (global warming) bullshit! I am tired of hearing this nonsense.

After Trump launched his presidential campaign in 2015, reporters regularly asked him about his position on climate change. Trump consistently said he thinks humans may have some impact on the environment, but he generally doesn’t believe in man-made climate change.

On June 17, 2015, the day after launching his campaign, Trump told political analyst Mark Halperin, "There could be a little bit of something having to do with factories and smoke and things. But for the most part I'm not a believer in (man-made climate change)."

Trump also said several times that he was much more concerned with nuclear war than climate change.

"The only global warming I'm worried about is nuclear global warming, because that's the single biggest threat," he said at a Republican debate in March 2016.

Since the election, Trump met with Gore at Trump Tower. And he told the New York Times editorial board that he would have an "open mind" on climate change, though he remained skeptical.

"You know, you can make lots of cases for different views," he said. "I have a totally open mind."

Many of Trump’s public policy positions are notoriously hard to pin down. But it appears that on the topic of man-made climate change, he’s expressed doubt more often than not.