Dispelling Myths About Millennials And Homeownership

Buying a home can be a struggle for any age group.

But it’s especially tough for millennials, particularly those in California given today’s high cost of housing and rising student debt.

Millennials are generally defined as the children of the Baby Boomers and older Gen Xers. They were born between the early 1980s and the late 1990s or early 2000s.

The oldest are now in their mid-30s and many are trying to enter the housing market for the first time.

The topic of millennials and housing caught our attention after 31-year-old California Assemblyman Ian Calderon, who helped create the Millennial Caucus of California, made a claim about homeownership levels among his age group.

"Home ownership for millennials is less than 13 percent nationwide. Affordable housing is a necessity. Millennials deserve the American dream too," Calderon, a Democrat, who represents portions of Los Angeles County said on Twitter on March 4, 2017.

We decided to explore Calderon’s claim. But rather than rating it on our Truth-O-Meter and moving on, we decided the issue is much larger than just one statistic. We set out to explore both the claim’s accuracy and the factors behind such a low share of millennials owning homes.

We also investigated some myths about millennials and housing, such as the notion that they simply aren’t motivated to enter the market and that they’re shunning the suburbs in favor of urban neighborhoods.

We’ll start with Calderon’s claim on Twitter. Just how low is the homeownership rate among millennials?

Calderon’s spokeswoman cited a report by the Obama Administration showing the "Probability of Owning a Home for 18 to 34 year olds" was just under 13 percent in 2014.

That figure, however, is much lower than the homeownership rates estimated by other studies and cited in recent news articles, which place the rate above 30 percent.

"It sounds very low to me. That seems extreme," said Abbe Will, a research analyst at Harvard University’s Joint Center for Housing Studies, referring to Calderon’s 13 percent figure.

Will co-authored a Harvard study released in February 2017 that listed the homeownership rate for the under 35 group at 31 percent in 2015.

A Washington Post column on millennials and housing listed the rate at 34 percent.

Of course, only a portion of millennials have reached the average home buying age, which is typically the early 30s.

Regardless of the exact homeownership rate for millennials, analysts agree it’s much lower than past generations. In fact, it hit a historic low of 31 percent in 2015, according to the Harvard study.

Here’s how that study lists the homeownership rate for the under 35 group in past years:

Last year, the nation’s homeownership rate for all ages fell to 62.9 percent, the lowest in more than 50 years, according to a Bloomberg.com article, citing U.S. Census figures. California’s rate lagged behind at 54.6 percent.

Why is the rate so low for millennials?

Experts say millennials, many who watched their parents struggle through the housing crisis of the last decade, are more cautious about launching into the market. That, combined with growing student debt, poor wage growth and job prospects during the Great Recession, depressed home ownership rates.

While people of all ages were affected during that period, "Younger households were hit considerably hard or harder with the recession," said Will. "(There are) a lot of headwinds really for younger households to enter into homeownership today and moving forward." 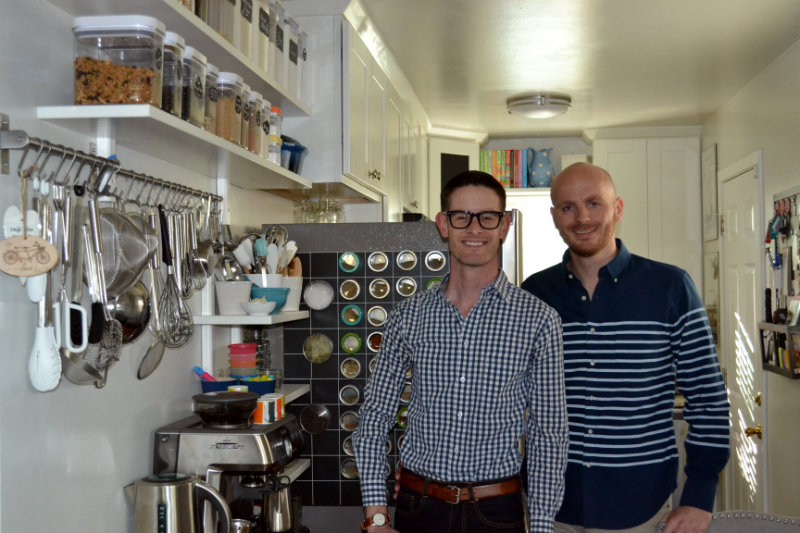 Jack and Joe Boniwell of Sacramento, both 31, said they've made the most of their small duplex in Sacramento. The home wasn't their first choice but allowed them to enter the market. Chris Nichols / PolitiFact California

Like many millennials, 31-year-old Joe Boniwell faced hurdles as he and his husband, Jack Boniwell, started their housing search two years ago.

But counter to the myth that millennials don’t want to buy, motivation wasn’t their challenge.

The couple, who had been renting in Sacramento for about $1,300 a month, wanted to buy a single family home in the Capital city’s vibrant urban core, giving them the ability to bicycle to work and someday raise children near their peers.

But as they searched in the spring of 2015, home prices started rising fast. And they didn’t have much saved for a down payment.

"We felt like we were up against a clock where if we played in the market too long into the summer, we would eventually be priced out of the neighborhoods where we wanted to buy," said Joe, who works as policy director for homelessness at Housing California, a nonprofit.

Repeatedly outbid by cash buyers, the couple changed their strategy.

They purchased a duplex in Sacramento’s North Oak Park neighborhood, still close to the city’s urban center. It’s not the single-family home they desired, but it gave them an investment property, one where they could live and save money by renting out the other unit.

"This was the only successful way we were able to enter the market after many attempts," Joe said.

The couple plans to look again for a single family home, once they save enough from their rental.

Are millennials motivated to buy homes?

The Boniwells aren’t unique among millennials in their desire to buy a home.

"We’re not seeing a lack of interest," said Tom Collishaw, whose nonprofit Self-Help Enterprises helps Central Valley residents become homeowners. "We have all kinds of millennials that continue to contact us with interest in that (first-time homebuyer) program."

"Younger people continue to report in a high share, upwards of 70 or 80 percent say, ‘I do want to own a home someday,’" added Will, the Harvard researcher. "It’s maybe not something they want to jump into immediately. Or, more likely, it’s that they’re not able to enter into homeownership for those affordability reasons and concerns that they’re just not in the same position as maybe other generations."

"We just haven’t seen in the data any indication of major shifts in attitudes in wanting to buy and own a home someday."

Are millennials shunning the suburbs?

Another misconception is that millennials are bypassing homes in the suburbs in favor of urban centers.

That’s just not the case, according to recent reports, including a March 2017 study by Zillow.com, the real estate website.

"As members of this huge generation start moving into the next stage of life, expect the homeownership rate to tick up and suburbs to change to suit their urban tastes," Jeremy Wacksman, Zillow Group chief marketing officer said in a company press release. "We're constantly learning about this young group of home buyers -- we're finding that they are more similar to older generations than many thought."

Additional research shows millennials are starting to shun the big cities, not the ‘burbs. "... if anything, (millennials are) moving away from the dense, expensive cities," Joel Kotkin, presidential fellow in Urban Futures at Chapman University, wrote in a February column.

While Wacksman of Zillow sees home ownership rates ticking upwards for millennials in the years ahead, not everyone is so confident.

Given that home costs continue to soar, Will, for one, said she doesn’t expect a significant change in the rate.

The Boniwells of Sacramento discovered that millennials, especially those in high-cost states such as California, may need to shift their housing strategy.

"I think young people who want to enter the market, who are faced with the increasing costs of housing in California, do have to think creatively about what it means to own property," Joe said. "For us, we were able to shift our mindset to ‘Okay, maybe we don’t have the house and the yard and the picket fence now, but we can start preparing ourselves for it and start making good choices now."

After examining the research, Calderon’s claim that the homeownership rate for millennials nationwide is less than 13 percent doesn’t match with industry figures. Estimates place the rate at closer to 30 percent. Still, the California assemblyman raised a critical issue about the lack of affordable housing for millennials — an issue that’s not going away in the Golden State.

The Daily Beast, column by Joel Klotkin, The High Cost of a Home Is Turning American Millennials Into the New Serfs, Feb. 3, 2017

Housingwire.com, These cities attract the most Millennial homeowners, Jan. 10, 2017