Bernie Sanders back in California

In this file photo from May 9, 2016, Vermont Sen. Bernie Sanders campaigned in Sacramento, Calif., ahead of the state's June primary. Andrew Nixon / Capital Public Radio

On Friday, he will be back.

Sanders is set to speak at 1 p.m. at a rally in San Francisco in favor of the Medicare-for-all national health insurance program he introduced last week. U.S. Senator Kamala Harris, D-Calif., is among the dozen Democratic senators who have co-sponsored the bill.

Friday’s rally will be held at the Yerba Buena Gardens esplanade, at 750 Howard St. It’s free, open to the public and sponsored by the California Nurses Association, which backed Sanders in the primary and supports his Medicare-for-all pitch.

In advance of his visit, we are taking a look at what Sanders’ ‘single payer Medicare-for-all’ proposal would do, as described by the New York Times. We are also looking at his record with the truth.

"Mr. Sanders’s bill would expand Medicare, one of the nation’s largest, most popular entitlement programs. The federal government would establish an annual budget for covered health care services. Medicare’s benefit package would be expanded to include coverage of dental care, vision services and hearing aids. The bill would also cover "comprehensive reproductive, maternity and newborn care, including abortion," according to a summary prepared by Mr. Sanders’s office.

The Times report added that Sanders’ bill "would bring huge changes to the health care system, affecting many people who are content with the coverage they have. More than 150 million people under the age of 65 have employment-based coverage. The Sanders bill would separate health insurance from employment, shrinking the role of employers and insurance companies."

A similar plan to establish a statewide single payer health plan stalled this year in the California Legislature, with lawmakers concerned over how to pay for the program. A legislative analysis projected the cost would be $400 billion annually, twice the state’s entire yearly budget.

After President Trump claimed in July that a national single-payer health system would "bankrupt our country," PolitiFact took a deep look at the topic in this article and found the answer is not so simple.

Sanders’ record with the truth

Looking back to last year’s campaign, Sanders fared better than the other major candidates for president on PolitiFact’s Truth-O-Meter. The scorecard logs how many statements we rate True, Mostly True, Half True, Mostly False, False or Pants On Fire. As of this month, Sanders has still yet to feel the burn of a Pants On Fire rating, which PolitiFact reserves for the most outlandish claims.

Also, as of this month, PolitiFact had fact-checked 116 statements by Sanders, before, during and after the campaign. He’s received True, Mostly True or Half True ratings about 70 percent of the time. Meanwhile, he's garnered Mostly False or False ratings on about 30 percent of his claims.

Sanders' PolitiFact report card is below. Click here for a dynamic look at the results. 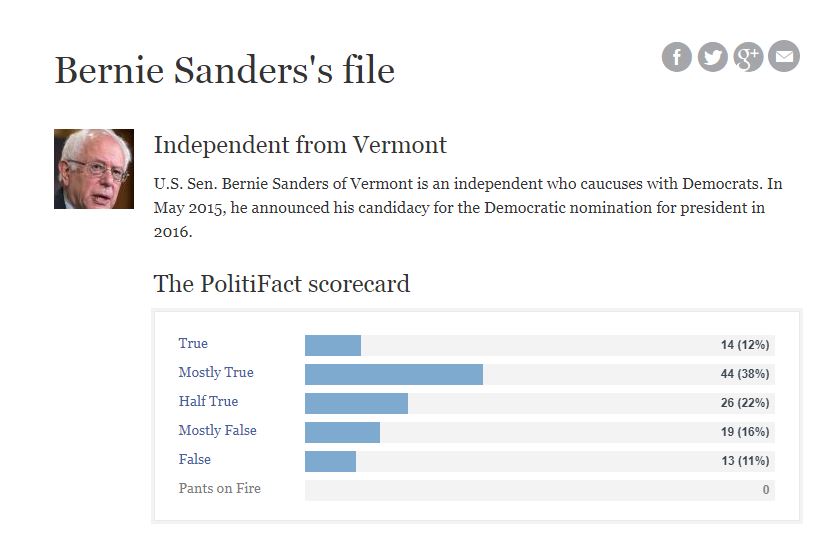 Despite his relatively strong record on accuracy, Sanders has stumbled somewhat in recent months. In April, PolitiFact tagged him with a False rating for his claim about last year’s voter turnout being the lowest in 20 years. It also rated Mostly False Sanders’ assertion that President Trump’s budget "gives a $100 billion tax break to three of the wealthiest families." In June, he received a Mostly True rating and in September a Half True rating for recent claims on health care.

We’ll be monitoring Sanders’ statements during his California trip. If you hear a claim that you think needs a fact-check, email us at [email protected], or contact us on Twitter or Facebook.

You can also fill out a form here with your idea.

We’re eager to examine the senator’s claims on his return trip to California.

PolitiFact, How expensive would a single-payer system be?, July 21, 2017