California Democratic Gov. Gavin Newsom made several claims on immigration during his first State of the State Address on Feb. 12, 2019.

In his first State of the State Address, California Democratic Gov. Gavin Newsom claimed the Trump administration has "manufactured" a crisis at the Southern border, arguing illegal border crossings are at historic lows, the undocumented population has declined and immigrants commit crimes at lower rates than native-born citizens.

"Let us state the facts. We are currently experiencing the lowest number of border crossings since 1971. In California, like our nation, our undocumented population is at its lowest level in more than a decade. Some 550,000 fewer in our state alone. Immigrants, both those here legally and those without documentation, commit crime at a lower rate than native-born citizens," Newsom said at the state Capitol on Feb. 12, 2019.

Given the continued debate over immigration and President Trump’s focus on building a border wall, we examined Newsom’s claims on the topic.

"We are currently experiencing the lowest number of border crossings since 1971."

We interpreted this as illegal crossings at the U.S.-Mexico border.

Those are measured by border patrol apprehensions, which have plummeted in recent years to between 300,000 and 400,000 per year after averaging more than 1 million annually in the 1980s and 90s. They peaked at 1.6 million in 2000, according to U.S. Customs and Border Protection data.

The arrests dropped to an historic low of 303,916 in fiscal year 2017. That led former Gov. Jerry Brown to claim last April "there is no massive wave of migrants pouring into California. Overall immigrant apprehensions on the border last year were as low as they’ve been in nearly 50 years."

But when Newsom made his similar statement, he left out the fact that those arrests went back up somewhat in fiscal year 2018 to 396,579.

Ev Meade, director of the Trans-Border Institute at the University of San Diego, told us Newsom’s statement was "basically true" considering the long-term pattern of arrests.

"It’s been up and down. There’s been some variation," Meade said. "But the long downward trend continues."

A spokesman for Newsom cited a November 2018 Pew Research Center report that cites arrest data from 2017, but not the most current fiscal year.

Meade cited the stepped up enforcement by the Trump administration and security concerns in Central America as reasons for the increase in illegal crossings in fiscal year 2018. He noted that families now account for a larger percentage of the migrants attempting to enter the United States than in years past. 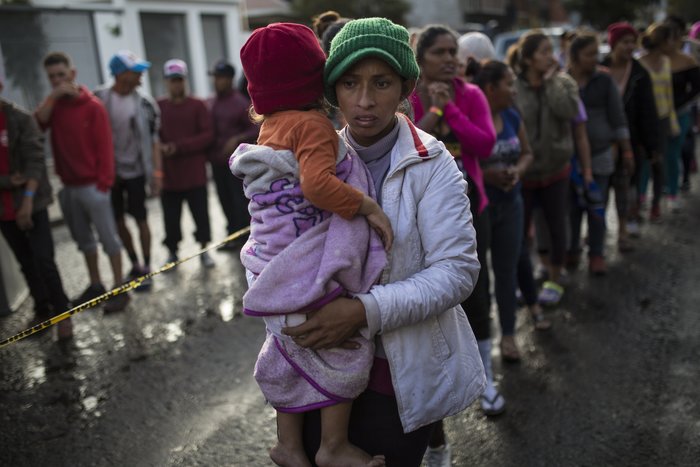 "In California, like our nation, our undocumented population is at its lowest level in more than a decade. Some 550,000 fewer in our state alone."

This claim by Newsom is supported by a February 2019 Pew report. It estimated that 10.7 million unauthorized immigrants, the lowest level in a decade, lived in the United States in 2016. It put California’s undocumented population at 2.2 million, down 550,000 from the start of the Great Recession in 2007.

The study said the decline in undocumented residents is "almost entirely due to a sharp decrease in the number of Mexicans entering the country without authorization."

Joseph Hayes, who researches immigration at the Public Policy Institute of California, described the Pew Research Center as one of the "most reliable sources" of data on the undocumented population. He noted its estimates are in line with figures from the U.S. Department of Homeland Security and the nonprofit Center for Migration Studies.

"Immigrants, both those here legally and those without documentation commit crime at a lower rate than native-born citizens."

We examined a very similar claim in August 2017 and rated it Mostly True. We found that research studies, including a 2015 report by the National Academy of Sciences, show the country’s foreign-born population is less likely to commit crimes than the native-born. At the time, we also noted that researchers agree more data is needed to get a better understanding of immigration and crime.

At least one expert, Meade, from the University of San Diego, said there’s no question today that the statement is accurate, saying there’s "overwhelming evidence" to support it.

We’ll continue to fact-check Newsom’s claims and measure his progress on campaign promises through our Newsom-Meter project.

The Washington Post, How the administration’s breathless numbers about dangers on the border stack up, Jan. 8, 2019