‘The California price’: Why it costs so much to build a home in the Golden State

The sound of electric saws slicing through plywood pierces the air in the Twelve Bridges neighborhood in Lincoln, a suburb outside Sacramento where new single-family homes are rising. Despite the progress, Mike Wyatt, like many housing developers in this state, is frustrated.

Building these two-story tract homes will take a few months, but getting to that point, he says, is an exercise in extreme persistence.

"It just takes too long in California to get projects approved," Wyatt, regional president for K. Hovnanian Homes, adds.

Before any nails are hammered or concrete poured, developers must navigate a painstakingly slow and complex approval process. In California, this can take years, or even decades, and cost millions of dollars in fees, far more than in other states.

As those costs pile up, they’re passed on to the homebuyer, driving prices further out of reach in a state already wracked by an affordable housing crisis, say builders and housing researchers.

"We’ve seen building costs growing in a number of different markets, but California stands out," said Elizabeth Kneebone, research director at UC Berkeley’s Terner Center for Housing Innovation. "And by some measures it has become home to some of the most expensive, if not the most expensive, markets to build in."

Democratic Gov. Gavin Newsom promised during his campaign to speed up housing development. So far, it hasn’t happened.

Housing production was down nearly 20 percent during the first half of this year, before showing improvement in August and September, according to the Construction Industry Research Board.

"There’s different ways that the housing crisis is driven," Wyatt said as he toured the Lincoln construction site. "One is, you can’t get projects pushed through the pipeline quick enough. Two, there is a labor shortage. Three, the regulations that we deal with. And then it’s just all the other, it seems, add-ons that happen to us every year where somebody thinks it’s a great idea solar should be standard. That’s a ten, fifteen thousand dollar cost. Who’s paying for that? You are, the consumer."

The starter homes in Lincoln will be priced in the high $400,000s. That’s a relative bargain in California, where the median home price was $605,000 in October, according to the California Association of Realtors.

That was more than twice the $299,000 national median home price.

So, what exactly is driving the huge cost of California’s new homes, aside from the basics of supply and demand?

PolitiFact California examined the factors that push prices up, with a focus on how the development process itself contributes to those stratospheric costs. 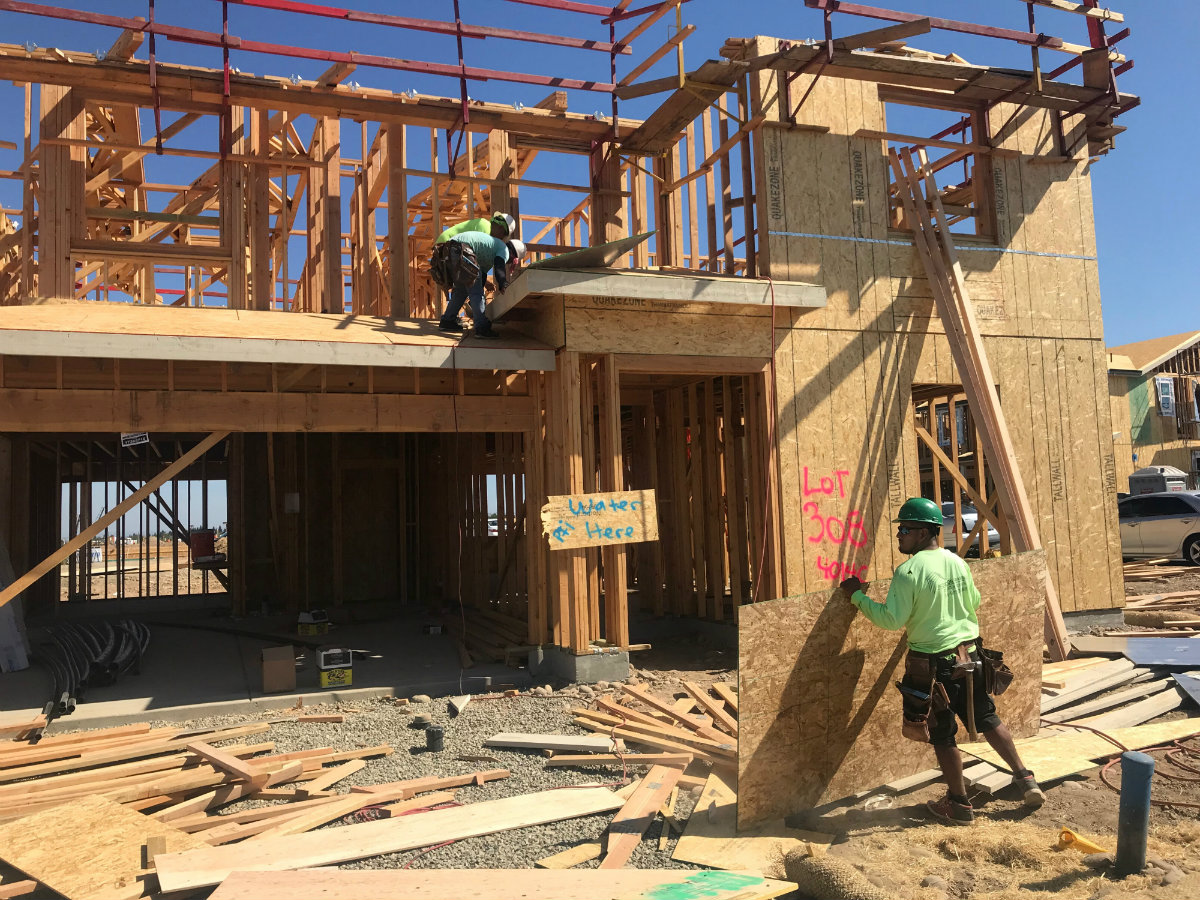 Housing researchers say two-thirds of the home building cost is materials and labor. In California, both are pricey and both are on the rise. One reason is President Donald Trump’s tariffs. Another is the state’s strict building codes.

Some of the steepest material increases are for wood and timber, along with concrete, cement and steel. The California Building Industry Association estimated Trump’s tariffs have driven up the cost of an average sized new home in the state by $20,000 to $30,000. That’s due to higher prices to produce household appliances, nails, lighting, laminate, tile, cabinets and other products made from aluminum, steel and lumber.

But even before those spikes, it cost a lot to build in California.

In its report, the LAO estimated that labor costs were 20 percent more expensive in California metros than in the rest of the country.

One of the biggest complaints from developers is the time it takes to wind through the local approval process. A project must be signed off by building and planning agencies, a planning board and often by a city council or county supervisors. During this process, California allows for the public, as well as interest groups, to have a stronger voice than most states in whether and how fast the project moves forward.

Lawsuits tied to California’s landmark Environmental Quality Act of 1970 have become a powerful tool used to slow housing projects. The law, signed by then-Gov. Ronald Reagan, requires state and local agencies to study and put in place ways to lessen the environmental impacts of development projects, such as their effect on traffic, noise, lighting and endangered species. CEQA lawsuits filed by environmental and citizen groups are commonplace and can lead to protracted court battles, adding years to a project’s timeline.

Developers, along with some housing researchers and state lawmakers, say the law must be reformed to prevent duplicative lawsuits that challenge projects even after they’ve cleared the CEQA process.

"If you aren’t in development it is almost impossible to understand how complex, and in many cases ambiguous and ever-changing many state and local requirements are, and it adds huge costs," Galante said.

Cities are speeding up housing approvals, but must still comply with the state’s lengthty CEQA requirements, said Jason Rhine, acting legislative director at the League of California Cities, which advocates for cities at the state Capitol.

"In large part, our cities are doing their best to go as fast as they can," Rhine said. He added that "it’s not under our control" when opponents bring last-minute lawsuits against a project — something his organization has lobbied to prevent. 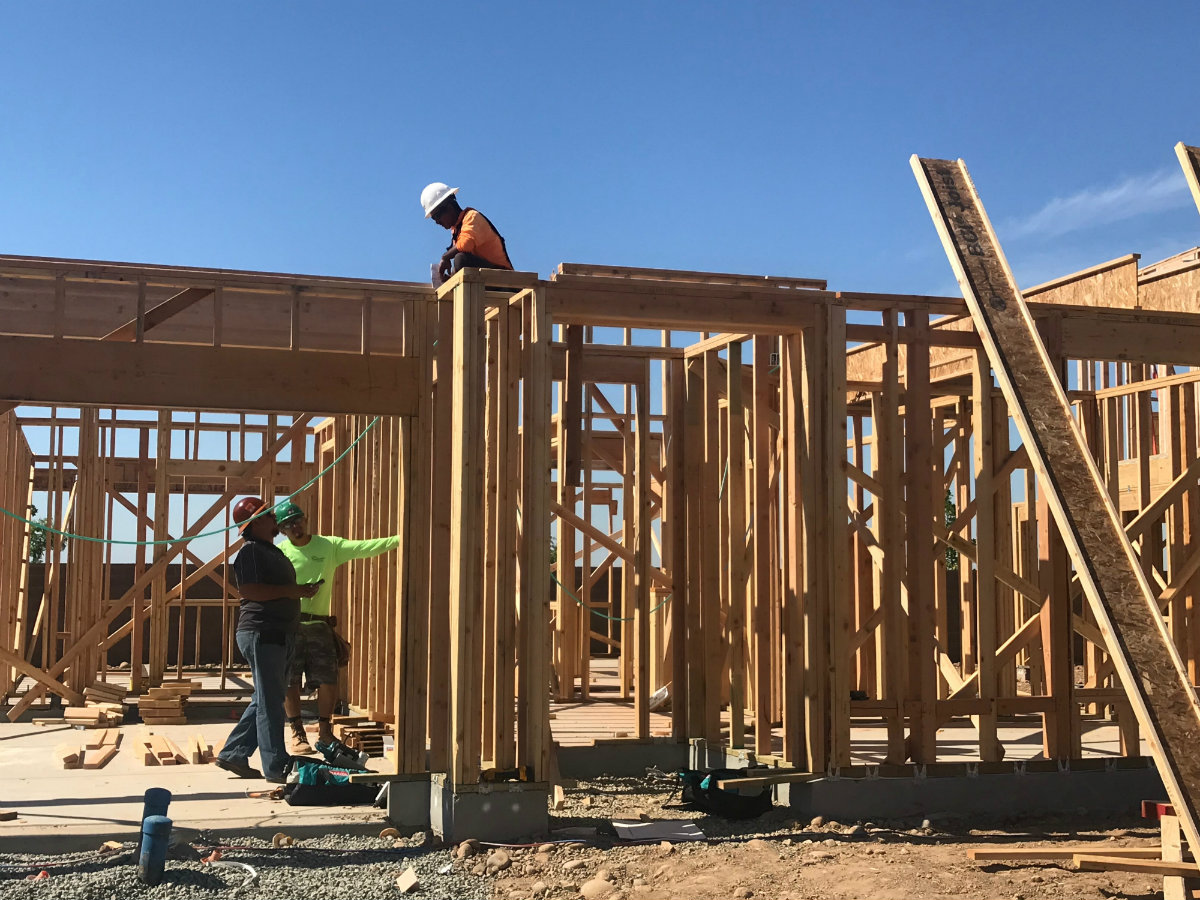 Hard costs such as materials and labor account for about two-thirds of the price of a new home. Chris Nichols / Capital Public Radio

Still another factor that inflates the cost of housing are the "impact fees" that local governments charge developers. Cities and counties in California have increasingly relied on these charges to pay for the roads, parks, schools, police and fire services needed for new communities. In 2015, the average impact fees in the state were $23,455 for every single-family home — almost three times the national average, the Terner Center reported.

But the fees aren’t just costly. They’re also unpredictable, lack transparency and can threaten a housing project’s viability, according to a state-commissioned study released in August by the Terner Center.

One reason cities rely on them so much is because federal funding for this infrastructure has decreased. Another is Proposition 13. That’s the measure California voters approved in 1978 to limit how much local governments can hike property taxes, which fund local services for new communities.

The result? Municipalities rely more and more on developer fees, Kneebone of UC Berkeley said. Those charges are then nearly always passed on to the homebuyer in the form of a higher purchase cost.

"Impact fees play a much bigger role in California than elsewhere," the researcher added.

Dan Dunmoyer, president of the California Building Industry Association, said lower fees and less red tape outside the state are the reason developers can build the exact same homes in Arizona, Oregon, Texas and elsewhere for hundreds of thousands of dollars less than in California.

"Until we change that whole process of developing land in California, we’ll never solve the affordability issue," Dunmoyer said. "And that’s our big challenge in California, is we’re sticking all that cost into the new home and that’s pushing the price of everyone’s home, new and old, up and up and up. And that’s what’s making this crisis so real."

While nearly all sides in California agree housing development needs to speed up, some advocates for affordable housing are cautious about how that should work. They say developers could be more efficient if they meet with the community first before they go forward with a new housing project.

"I think accountability is a really important thing that we cannot lose in the development process. So, any streamlining cannot come at the cost of public input, and accountability, as well as environmental protections," said Lupe Arreola, executive director of Tenants Together, a statewide group that advocates for renter protections.

It’s not just single-family homes that are expensive to build. California’s growing number of apartment projects are also costly.

"It is very, very expensive," Sacramento developer Sotiris Kolokotronis said as he toured The Press building, his 277-unit apartment complex under construction earlier this year. "Just the hard costs over the last six, seven years have more than doubled — the cost of labor and materials, just to build the building." 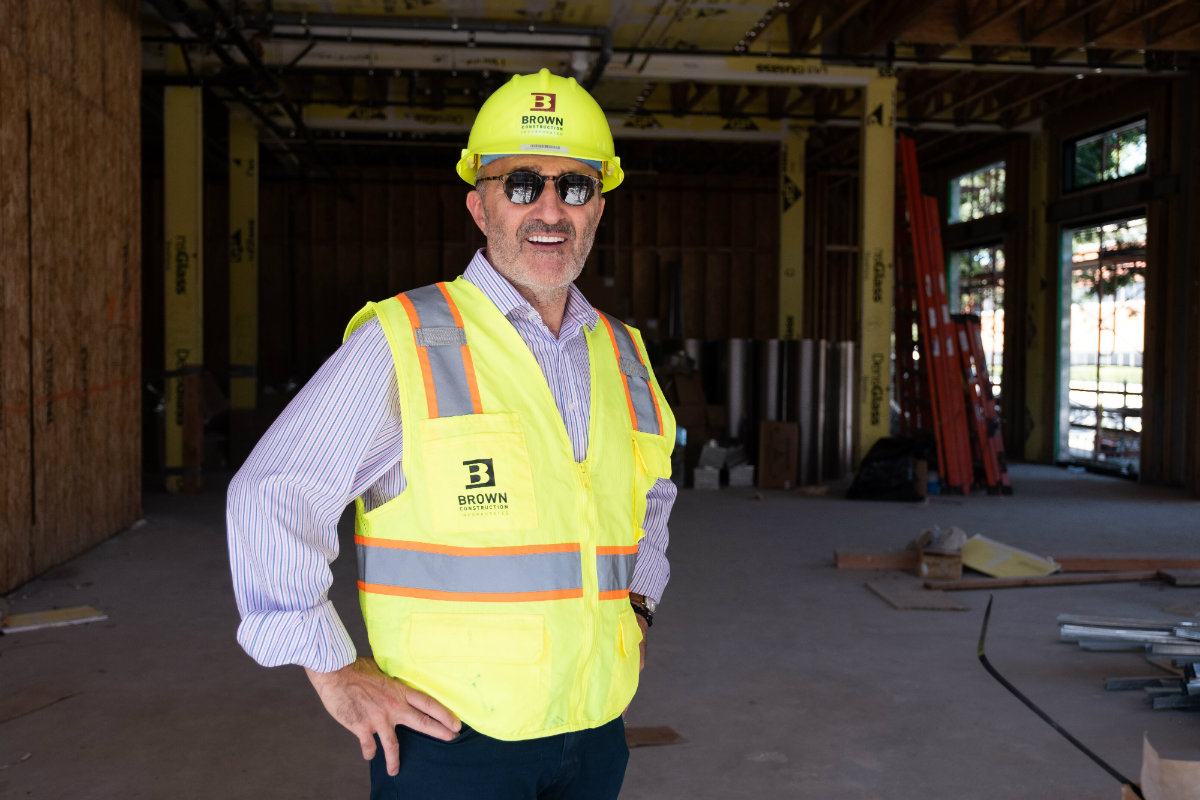 The market-rate rental project is expected to open early next year and will be among the largest in the city’s Midtown neighborhood.

Kolokotronis, a fixture in Sacramento’s development world, said construction standards in California, along with home prices, have changed dramatically in recent decades.

"Today we are not building the same homes and apartments that we were building 30 years ago from a standpoint of requirements, codes, sustainability," he said. "We try to make them better, more efficient and all that good stuff. That makes sense. But at the same time, we have to accept, they make them more expensive. A lot more expensive. A lot more complicated to build them. Those things people need to understand." 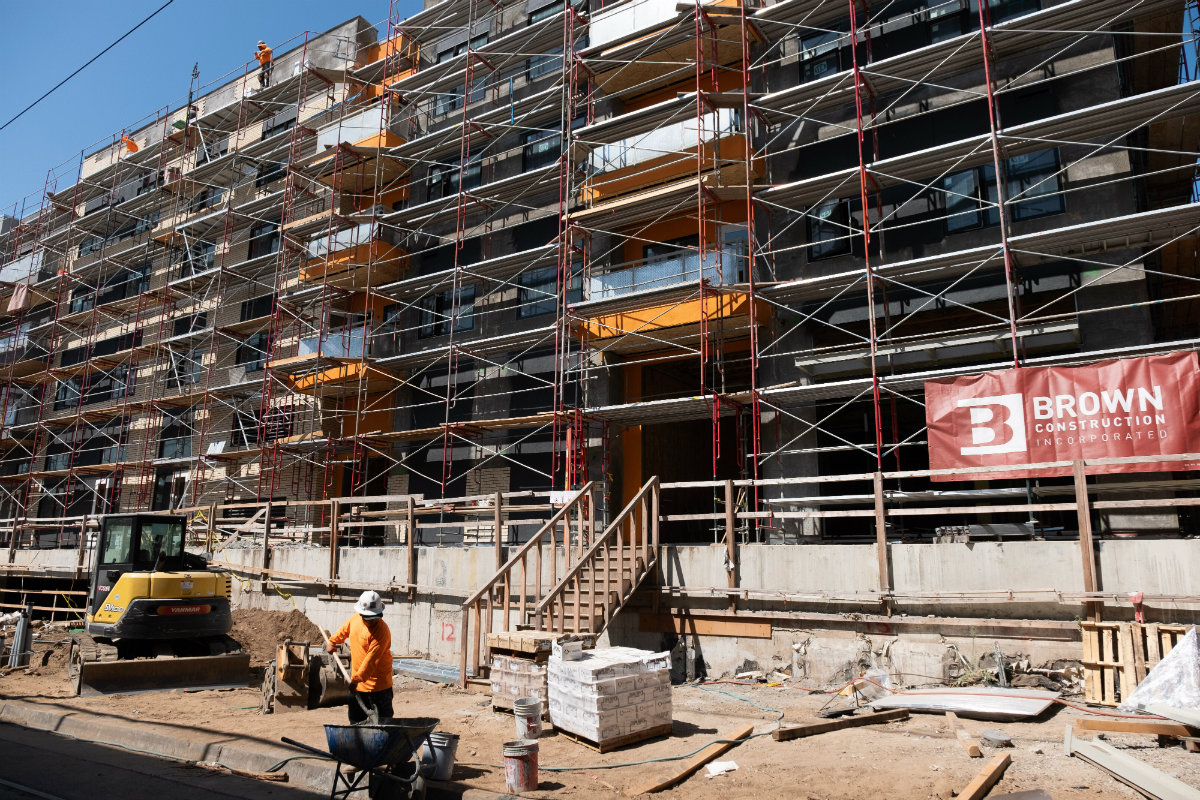 The four-story Press building will include studios all the way to three-bedroom apartments, along with retail on the ground floor. Andrew Nixon / Capital Public Radio

Even with the exorbitant costs, millions of Californians continue to pursue the dream of owning a home.

The freelance photographer says buying will require change. She’ll have to find what she calls "a real job" that pays more consistently. 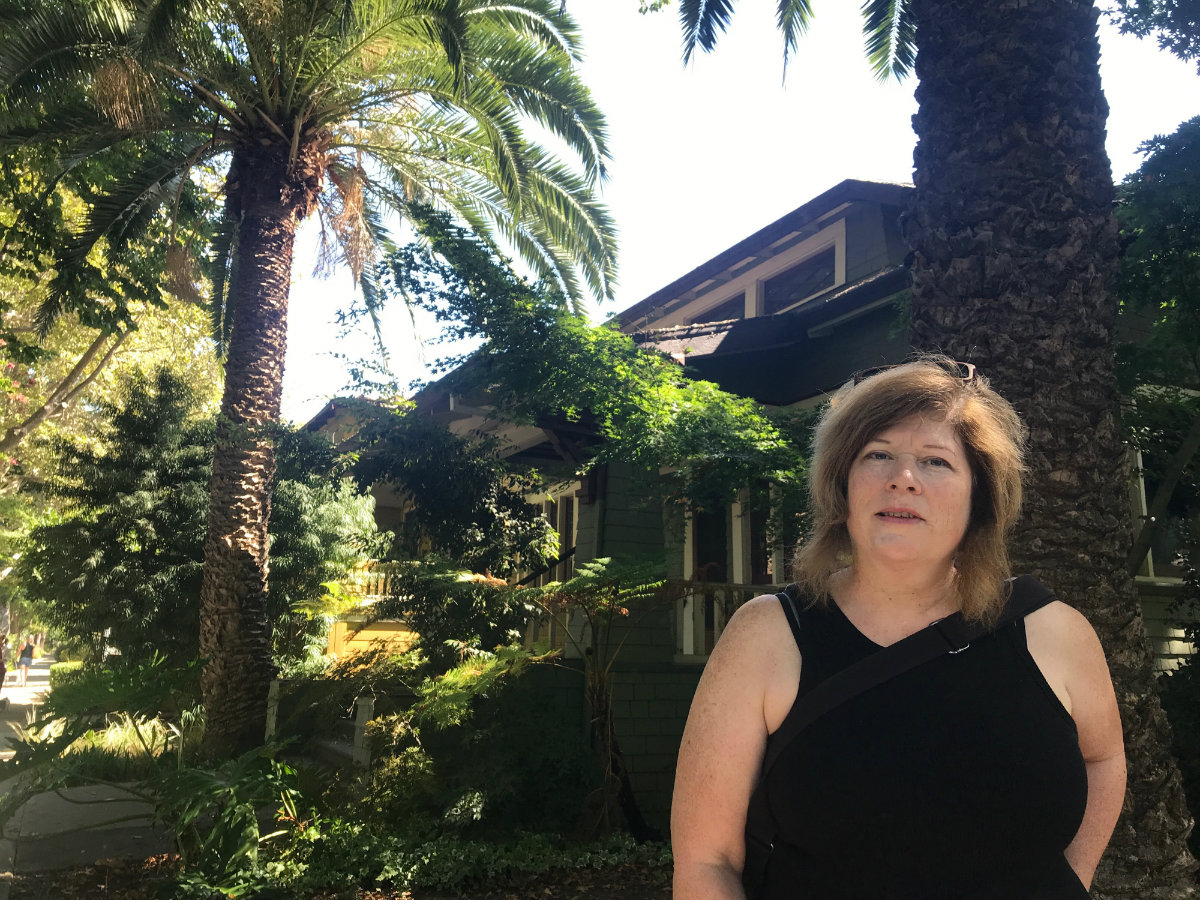 She knows her home will cost more because it’s so complicated and expensive to build in California.

Still, Mitchell says she has faith "in our government’s process. Surely, it could be more streamlined and efficient though."

While many have left the Golden State — largely because homes are so expensive — Mitchell says she’s among those willing to bear the cost.

"We pay the price," she says. "It’s a steep price. The California price."

PolitiFact California will continue to answer questions about the state’s high housing costs. Share your experiences and email us your ideas for a story or fact-check at [email protected], or contact us on Twitter or Facebook.

PolitiFact California, Has Gavin Newsom made progress on his pledge to boost California’s housing supply?, July 18, 2019