Who is Gordon Sondland? What to watch for in his impeachment inquiry testimony

An ongoing argument by President Donald Trump and Republicans who reject the impeachment inquiry is that administration officials who have testified don’t know the president or haven’t personally talked to him. That will change when Gordon Sondland testifies publicly Nov. 20 before the House Intelligence Committee.

Sondland is the U.S. ambassador to the European Union and has been in direct meetings and conversations with Trump and with Ukraine President Volodymyr Zelensky. In sworn testimony behind closed doors Oct. 17, Sondland said Trump told him there would be "no quid pro quo" with Ukraine. But Sondland later updated his testimony to describe a conversation with a Ukrainian official, in which Sondland told him that U.S. aid would likely not flow unless Ukraine made an anti-corruption statement.

Lawmakers in the impeachment inquiry are likely to question Sondland about his conversations with Trump, about his own involvement in the administration’s conditioning of Congress-approved aid to Ukraine, and his interactions with Rudy Giualini, Trump’s personal lawyer who had an unofficial communications channel with Ukraine.

Trump nominated Sondland to his diplomatic post, and the U.S. Senate confirmed him June 2018.

Before his diplomatic post, Sondland was in the hotel industry. He founded Provenance Hotels, which has boutique "lifestyle" hotels in at least seven states and employs more than 1,000 people between its hotels and headquarters in Portland, Ore., according to Sondland’s State Department biography.

Sondland in 2016 distanced himself from Trump when he was campaigning for president.

Sondland withdrew his name from a fundraising event for Trump, according to Willamette Week. Sondland’s spokesperson then said that Sondland’s name had been added to the list of sponsors without his approval, that he would not be attending the event, and that despite Sondland’s past support for Republican presidential nominees, Trump’s "constantly evolving positions" diverged from Sondland’s personal beliefs and values "on so many levels."

Highlights from his text messages

As part of the impeachment inquiry, Kurt Volker, the former special representative to Ukraine, disclosed to lawmakers batches of text messages he had with Sondland and with William Taylor, Jr., the acting U.S. ambassador to Ukraine. (Volker’s text messages also included his communications with Giuliani and Andrey Yermak, an adviser to Zelensky.)

The messages show the diplomats trying to coordinate a phone call and White House meeting between the two presidents and trying to figure out what needed to be done to get there.

On Sept. 1, Taylor texted Sondland: "Are we now saying that security assistance and WH meeting are conditioned on investigations?"

On Sept. 9, Taylor texted Sondland: "The message to the Ukrainians (and Russians) we send with the decision on security assistance is key. With the hold, we have already shaken their faith in us. Thus my nightmare scenario."

"Counting on you to be right about this interview, Gordon."

About three minutes later, Sondland replied: "Bill, I never said I was ‘right’. I said we are where we are and believe we have identified the best pathway forward. Lets hope it works."

About 10 minutes later, Taylor wrote: "As I said on the phone, I think it’s crazy to withhold security assistance for help with a political campaign."

About five hours later, Sondland replied: "Bill, I believe you are incorrect about President Trump’s intentions. The President has been crystal clear no quid pro quo’s of any kind. The President is trying to evaluate whether Ukraine is truly going to adopt the transparency and reforms that President Zelensky promised during his campaign I suggest we stop the back and forth by text If you still have concerns I recommend you give Lisa Kenna or S a call to discuss them directly. Thanks." 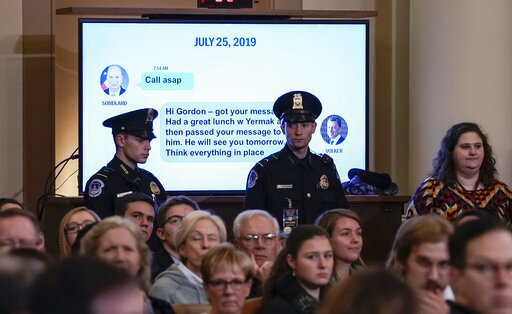 Described Marie Yovanovitch in positive terms: Despite Trump’s public disparagement of Marie Yovanovitch, the U.S. ambassador to Ukraine removed in May, Sondland said she was "an excellent diplomat with a deep command of Ukrainian internal dynamics, the U.S.-Ukraine relationship and associated regional issues."

"I was never a part of any campaign to disparage or dislodge her, and I regretted her departure," Sondland said.

Did not like Giuliani’s involvement in Ukraine diplomacy: "We were also disappointed by the president's direction that we involve Mr. Giuliani. Our view was that the men and women of the State Department, not the president's personal lawyer, should take responsibility for all aspects of U.S. foreign policy towards Ukraine."

Sondland said he "did not understand until much later" that Giuliani’s agenda in Ukraine "might have also included an effort to prompt the Ukrainians to investigate Vice President (Joe) Biden or his son, or to involve Ukrainians directly or indirectly in the president's 2020 reelection campaign."

"As an aside, please know that I would have not recommended that Mr. Giuliani, or any private citizen for that matter, be involved in these foreign policy matters. However, given the president's explicit direction, as well as the importance we attached to arranging a White House meeting between presidents Trump and Zelensky, we agreed to do as President Trump directed."

On his call with Trump and the mention of no quid pro quo: Sondland described his call to Trump after Taylor texted Sondland in September saying it was "crazy to withhold security assistance for help with a political campaign."

"WeIl, from the time that the aid was held up until I telephoned the president there were a lot of rumors swirling around as to why the aid had been held up, including they wanted a review, they wanted Europe to do more. There were all kinds of rumors. And I know in my few previous conversations with the President he's not big on small talk so I would have one shot to ask him.

"And rather than asking him, ‘Are you doing X because of X or because of Y or because of Z?’ I asked him one open-ended question: What do you want from Ukraine? And as I recaIl, he was in a very bad mood. It was a very quick conversation. He said: I want nothing. I want no quid pro quo. I want Zelensky to do the right thing.

"And I said: What does that mean?

"And that was the end of the conversation. I wouldn't say he hung up me, but it was almost like he hung up on me."

In the deposition, Sondland was asked if media reports were accurate in saying that Sondland could not verify if Trump was telling the truth about no quid pro quo.

"All I could verify is that's what he said," Sondland said. "I don't know if it was the truth or it wasn't the truth. That's what he told me."

Sondland updated his testimony after reviewing opening statements from Taylor and Timothy Morrison, a former Russia expert on the White House’s National Security Council. Sondland said those testimonies "refreshed" his recollection about conversations in early September 2019 about the suspension of U.S. aid to Ukraine.

Sondland said he recalled telling a Zelensky aide in September "that resumption of U.S. aid would likely not occur until Ukraine provided the public anti-corruption statement that we had been discussing for many weeks."

Sondland initially testified that he had never heard about aid being withheld until it actually was withheld. He also initially said he never thought there was a precondition to the aid and "was dismayed when it was held up, but I didn’t know why."

PolitiFact, The backstory of the Muslim soldier's dad who said Trump 'sacrificed nothing', July 29, 2016