Republicans and Democrats claim to support Dreamers. So why can’t they pass a law?

In this 2010 file photo, UCLA student Jose Ortiz, 20, reacts as the Dream Act fails to move forward in the Senate during televised coverage of proceedings at the UCLA Downtown Labor Center in Los Angeles, Dec. 18, 2010. (AP/Jason Redmond)

Politicians and the American public seem to agree that immigrants known as "Dreamers" should be given a chance to stay in the country permanently and legally.

For nearly two decades, Democrats and Republicans in Congress have crafted versions of legislation that would offer immigrants who came here as children a path to U.S. citizenship. Presidents of both parties have expressed support.  Many polls show the majority of Americans support it, too.

But that bipartisan enthusiasm has not materialized into law. Why not?

Neither party is willing to concede its priorities.

Democrats generally favor a bill that addresses Dreamers without giving in to President Donald Trump’s priorities on immigration. Republicans do not want to extend an Obama-era program, which defers deportation, without achieving other goals such as a reduction in legal immigration or funding for a U.S.-Mexico border wall.

Congress has become a quagmire where it is hard to pass any bill. Lawmakers don’t trust that if they support a bill on the priorities of the opposite side that it will be their turn next.

As both sides hold up what the other wants, it creates a "zero-sum game," said Theresa Cardinal Brown, director of immigration and cross-border policy at the Bipartisan Policy Center.

Before Trump took office, the Republican Party lurched to the right on immigration — and then more so under Trump, said Frank Sharry, executive director of America’s Voice, which supports legislation to protect Dreamers from deportation. That has made it an even higher hurdle for the two parties to reach an agreement.

Trump has at times said he is willing to compromise, but has thwarted some bills, endorsed deals that included provisions that didn’t stand a chance of passing, and was accused by Democrats of using inflammatory language that sidetracked negotiations. Trump appears to prefer pursuing his immigration priorities through executive orders rather than crafting a compromise with Democrats. 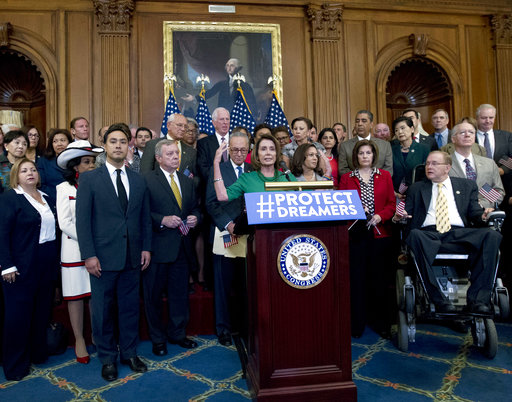 A key issue for people who favor stricter immigration laws is avoiding another scenario where a new group of immigrants are in the same situation Dreamers are in now.

"The issue here is if you give amnesty to DACA beneficiaries, how do you compensate for that?" said Mark Krikorian, executive director of the Center for Immigration Studies, a think tank that favors low-immigration levels. "There have to be reductions in legal immigration, there have to be enforcement measures to limit future DACA situations."

The idea of broad public support doesn’t mean that much if Congress hasn’t passed a bill, he said.

"If Democrats and Republicans don’t agree on a specific proposal, all of this talk of bipartisan agreement is hot air," Krikorian said.

Former U.S. Rep. Carlos Curbelo, R-Fla., said that a lot of Republicans and Democrats in Congress "prefer the politics of immigration over solutions for immigration." 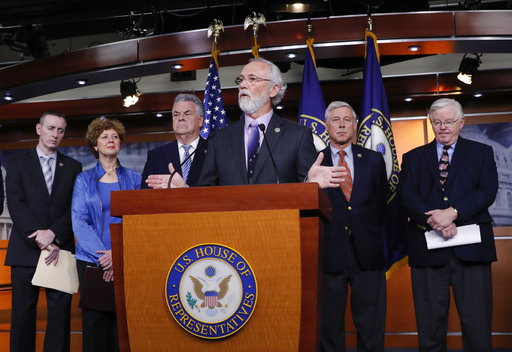 The current hangup over a legal immigration status for Dreamers revolves around the Deferred Action for Childhood Arrivals program created by the Obama administration in 2012. The program aims to protect Dreamers from deportation in two-year intervals. About 650,000 immigrants have DACA protection, which is subject to renewal and allows them to apply for permission to work legally.

When he announced the program in June 2012, President Barack Obama said DACA was not a permanent fix, rather a "temporary stopgap measure" to focus immigration enforcement resources "in the right places" and give a degree of relief to young immigrants. He called on Congress to act and pass a law to help Dreamers.

Former Vice President Joe Biden, the presumptive Democratic presidential nominee, has called for reinstating DACA and supports legislation that would allow beneficiaries to stay in the country. 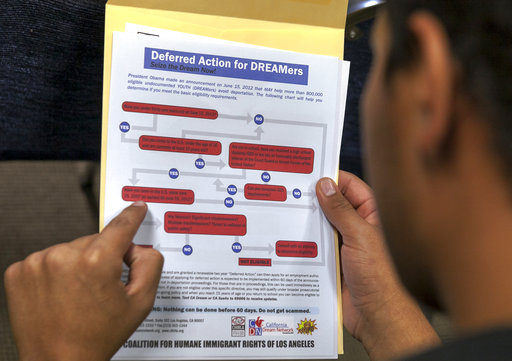 In this Aug. 15, 2012 file photo, a man reads a guide of the conditions needed to apply for Obama-era Deferred Action for Childhood Arrivals program at the Coalition for Humane Immigrant Rights offices in Los Angeles. (AP/Damian Dovarganes)
Two decades of failed immigration proposals

The bipartisan push to pass legislation began in 2001, led by Sen. Orrin Hatch, R-Utah, and Sen. Dick Durbin, D-Ill. The initial proposal was known as the Development, Relief, and Education for Alien Minors (DREAM) Act — its acronym has since been commonly used to reference potential beneficiaries, Dreamers.

Other versions in the early 2000s drew co-sponsors from both parties but not much serious consideration. One Dreamer-specific bill in 2010 passed the House but failed to reach a 60-vote threshold in the Senate.

Broader immigration bills in 2006 and 2013 also failed. A Republican-led Senate in 2006 passed a bill to strengthen border security and provide legal immigration status for people illegally in the country. President George W. Bush commended the Senate "for passing bipartisan comprehensive immigration reform," but the measure wasn’t brought up in the Republican-led House, which favored enforcement alone.

Another bill to increase the number of Border Patrol agents at the southern border and to add other security measures passed the Senate in 2013. That proposal, written by four Democrats and four Republicans, also allowed immigrants in the country illegally to adjust their immigration status, if they met certain criteria. But House Republicans again opposed the Senate immigration proposal, arguing that border security needed to be addressed first before legalizing the status of millions of immigrants.

No other proposal introduced in recent years has prevailed.

When you factor in lawmakers’ attention on the coronavirus and damaged economy, a permanent solution for Dreamers in 2020 becomes more unlikely, experts said.

"The party lines are drawn," said Bier, the Cato Institute expert. "And I think it’s very unlikely we’ll see any compromise until there’s a political shakeup."

Obama White House, Remarks by the President on Immigration, June 15, 2012