GOP House Minority Leader Kevin McCarthy of Bakersfield is facing calls this week to apologize for and delete a tweet in which he called the novel coronavirus "the Chinese coronavirus," a description some say is racist and xenaphobic.

COVID-19, the disease caused by the new coronavirus, was first identified in Wuhan, the capital of China’s Hubei province. It has since spread to more than 100 countries and affects all races and ethnicities.

With controversy around his tweet growing, McCarthy said on Tuesday he stands by his description, adding "Democrats are trying to score political points by calling Republicans racist."

PolitiFact California examined McCarthy’s statement, the reaction to it and what some say are its potentially dangerous consequences.

What Did Rep. Kevin McCarthy Say?

McCarthy sent out his tweet March 8 linking to a U.S. Centers for Disease Control website on the coronavirus.

It reads: "Everything you need to know about the Chinese coronavirus can be found on one, regularly-updated website:" 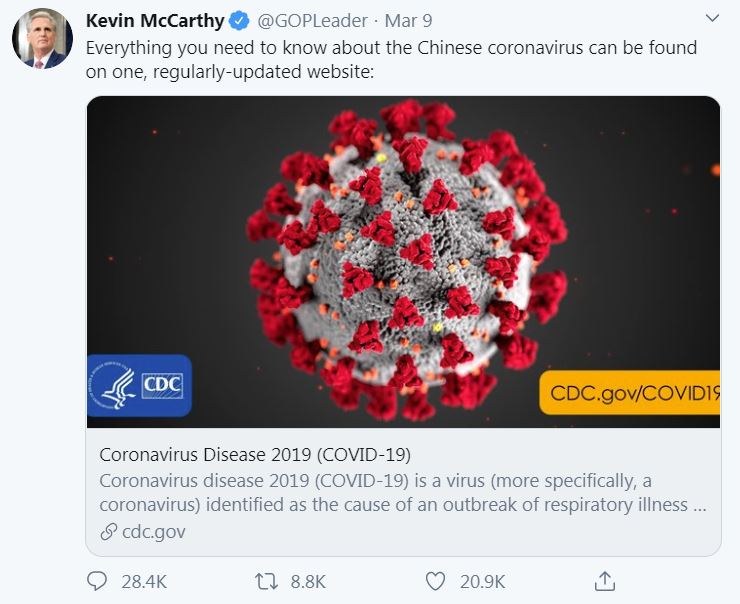 What Was The Reaction?

Some lawmakers, including members of the Congressional Asian Pacific American Caucus [CAPAC], labeled it disrespectful and threatening.

"Your words are so hurtful. We may be of different parties but people depend on all of us to be compassionate & effective leaders. Asian Americans - from kids to seniors are getting attacked bc of this exact type of rhetoric. Do better - please - i implore you. Lives are at stake," Rep. Grace Meng, a Democrat from New York responded on Twitter.

House Speaker Nancy Pelosi tweeted that "bigoted statements which spread misinformation and blame Asians and the Asian American community" for coronavirus "make us all less safe." She called on McCarthy to "delete this tweet and apologize immediately."

This is not the first time lawmakers have raised similar concerns. CAPAC sent a letter to every member of Congress last month asking them "not to stoke xenophobia or spread misinformation," about the novel coronavirus, according to the group’s press release.

Rep. Judy Chu, D-Los Angeles, for example, urged McCarthy to "listen to the advice of actual experts and only refer to COVID-19 by its official names."

The group’s letter cited "the rise in racial prejudice and violent attacks against Asian Americans in the aftermath of the COVID-19 outbreak."

How Did McCarthy Respond To The Backlash?

McCarthy responded to the criticism with another tweet on March 10.

Coronavirus is a China-born disease—made worse by a Communist Party that rejected America's help to contain it.

Which is why Dems & media called it "Chinese coronavirus" for weeks."

To support his last claim, McCarthy showed images of news headlines from The Washington Post and The New York Times that included the phrase "Chinese Coronavirus" or "Wuhan Coronavirus."

The headlines did, in fact, include those phrases. The Times articles, however, are from January, before some news outlets moved away from the terms over concerns about the stigma they carry. The Post article is from late February and no longer includes the description.

McCarthy also pointed to a hearing on Feb. 5 by a Democratic-controlled House subcommittee, titled: The Wuhan Coronavirus: Assessing the Outbreak, the Response, and Regional Implications.

McCarthy has issued subsequent tweets about the novel coronavirus, without describing it as "the Chinese coronavirus."

‘The Virus Can Affect All People’

Sacramento State professor of Ethnic Studies Timothy Fong said McCarthy’s words, if the congressman does not disavow them, have the potential to perpetuate hostility against Asian Americans.

"I can see why people are calling for an apology," Fong said. "There’s a great amount of fear, anxiety and concern around the coronavirus. It really is a time for us to support one another and not divide people. The virus can affect all people, not just one group."

Some defended McCarthy’s statement, saying viruses are named after their location of origin, pointing to the Spanish flu and West Nile virus. But while the Spanish flu, which killed 50 million people a century ago, was first reported by a national Spanish newspaper, it "didn’t originate in Spain .... Even today, experts aren’t certain where the outbreak originated," according to an article by NPR’s Science Friday. Meanwhile, the West Nile Virus was named after a district in Uganda where it was first isolated in 1937, according to a World Health Organization fact sheet.

Fong, the ethic studies professor, said political leaders who label the novel coronavirus "the Chinese coronavirus" ignore past stereotypes and hostility against Asian Americans. "It’s dangerous when they don’t recognize the problem it creates."

Earlier this month, NPR documented some of the anti-Asian discrimination that has followed the spread of the virus.

The World Health Organization warns against naming new diseases for geographic locations, including countries, the San Francisco Chronicle reported. According to WHO guidelines, the advice is intended, in part, to "avoid causing offense to any cultural, social, national, regional, professional or ethnic groups."

Earlier this week, the Centers for Disease Control and Prevention’s director, Robert Redfield, told a House committee that referring to the virus as the "Chinese coronavirus" is inappropriate.

WHO, World Health Organization Best Practices for the Naming of New Human Infectious Diseases, May 2015

The New York Times, First Patient With Wuhan Coronavirus Is Identified in the U.S., Jan. 21, 20120

U.S. House of Representatives, Subcommittee on Asia, the Pacific and Nonproliferation (Committee on Foreign Affairs) Hearing: The Wuhan Coronavirus: Assessing the Outbreak, the Response, and Regional Implications, Feb. 5, 2020