What happened during the Jan. 6 call between Donald Trump and Kevin McCarthy?

On Jan. 6, supporters of President Donald Trump stormed the U.S. Capitol to stop the official counting of the Electoral College vote. What did then-President Trump know, and when did he know it? And how did Trump view the actions of his supporters who overran the Capitol Police?

Trump’s role came up during an interview of House Minority Leader Kevin McCarthy, R-Calif., on the April 25 edition of "Fox News Sunday." During the interview, host Chris Wallace repeatedly pressed McCarthy on the nature of a call between Trump and McCarthy while members of the pro-Trump crowd were still in the building.

As we take a closer look at what is known about Trump’s actions, we’ll start with what McCarthy told Wallace. Broadly speaking, we found that McCarthy’s answers are not provably wrong, but they were evasive, inconsistent with his earlier comments, and selectively framed in a flattering way to Trump.

Congress, meanwhile, hasn’t been able to put together an official bipartisan inquiry into the storming of the Capitol because of partisan disagreement over its parameters.

In its absence, journalists and the public are left to piece together Trump’s role that day from a hodgepodge of unofficial sources.

Here’s the relevant exchange between McCarthy and Wallace, including screenshots Wallace showed his audience.

Wallace: "During the Trump impeachment in February … a Republican congresswoman said this. I want to put it up on the screen. She said that while the Jan. 6th riot was in full force, you phoned President Trump and asked him to call off his supporters. And according to you, she said, the president responded, ‘Well, Kevin, I guess these people are more upset about the election then you are.’ Is she right? Is that what President Trump said to you?" 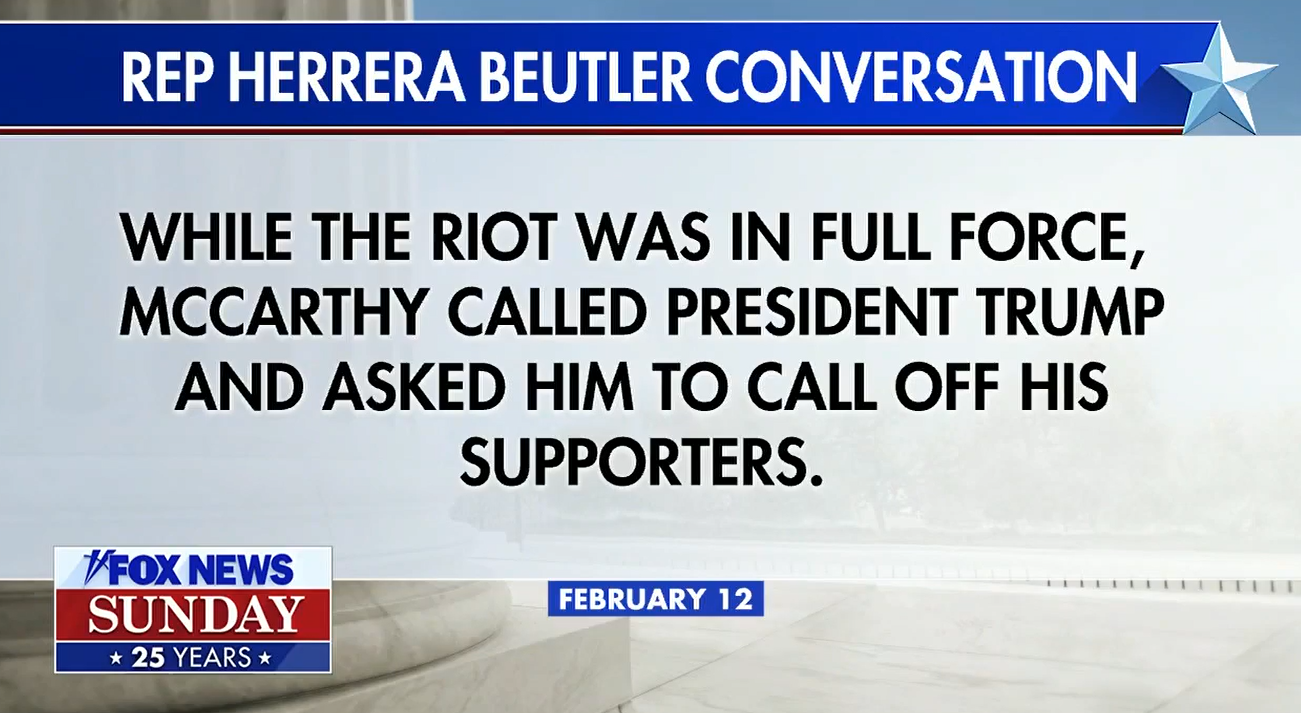 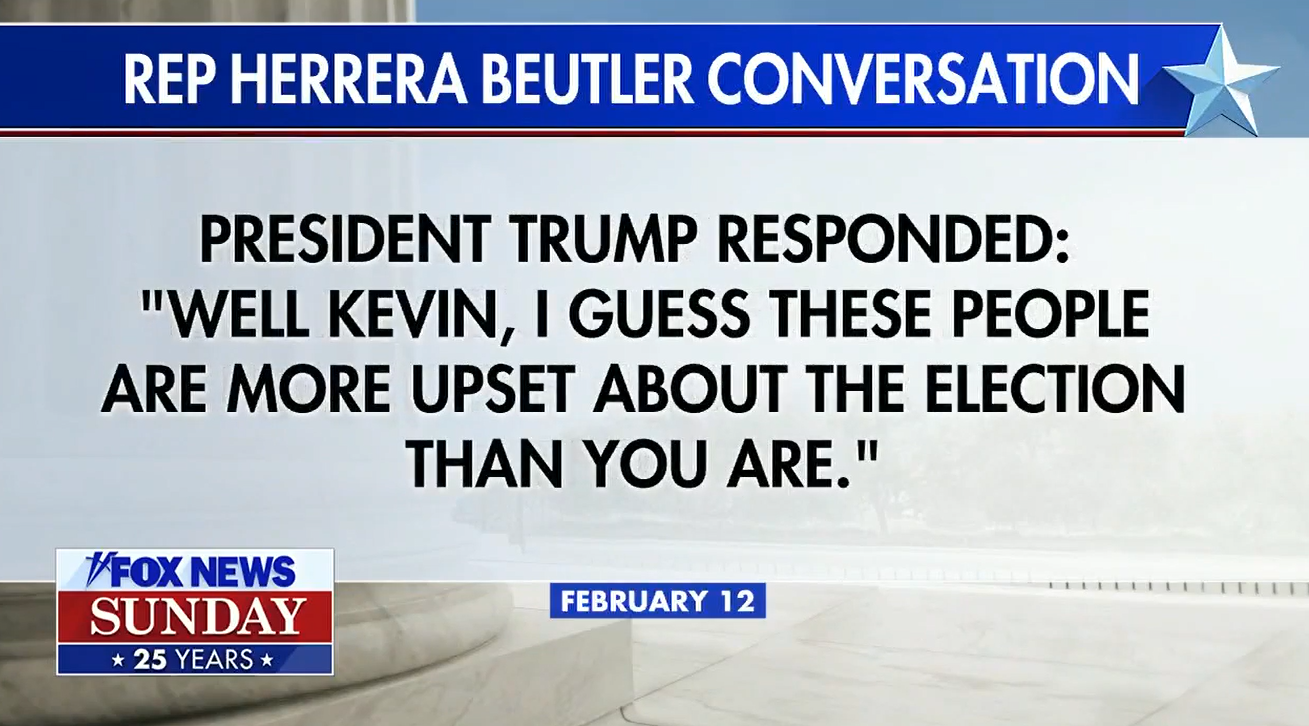 McCarthy: "What I talked to President Trump about, I was the first person to contact him when the riot was going on. He didn't see it. What he ended the call was saying — telling me, he'll put something out to make sure to stop this. And that's what he did, he put a video out later."

Wallace: "Quite a lot later. And it was a pretty weak video. But I'm asking you specifically, did he say to you, ‘I guess some people are more concerned about the election than you are?’"

McCarthy’s comments drew attention for what they didn’t say, and for the possibility that he was soft-pedaling the contents of his call because Republicans’ chances of winning back the House in the 2022 midterm elections could depend on how energized Trump’s supporters are.

The tone of McCarthy’s comments also conflicted with his remarks on the House floor on Jan. 13, just a week after the Capitol was breached.

"The president bears responsibility for Wednesday’s attack on Congress by mob rioters," McCarthy said. "He should have immediately denounced the mob when he saw what was unfolding. These facts require immediate action by President Trump, (to) accept his share of responsibility, quell the brewing unrest and ensure President-elect Biden is able to successfully begin his term."

Back in February, Herrera-Beutler, R-Wash., detailed what McCarthy had told her about his Jan. 6 call with Trump. Here’s the key portion of a statement she tweeted on Feb. 12:

"When McCarthy finally reached the president on Jan. 6 and asked him to publicly and forcefully call off the riot, the president initially repeated the falsehood that it was antifa that had breached the Capitol. McCarthy refuted that and told the president that these were Trump supporters. That's when, according to McCarthy, the president said, ‘Well, Kevin, I guess these people are more upset about the election than you are.’

"Since I publicly announced my decision to vote for impeachment, I have shared these details in countless conversations with constituents and colleagues, and multiple times through the media and other public forums."

In the "Fox News Sunday" interview, McCarthy didn’t directly deny that Trump had said, "Well, Kevin, I guess these people are more upset about the election than you are." But he did sidestep the question, effectively downplaying its significance.

As for McCarthy’s assertion to Wallace that he and Trump "engaged in the idea of making sure we could stop what was going on inside the Capitol at that moment in time," this is incomplete. According to McCarthy’s earlier account to Herrera-Beutler, he and Trump argued over whether the rioters were antifa members or Trump supporters.

In addition, McCarthy spotlighted to Wallace that Trump ended the call by saying he’d "put something out to make sure to stop" the insurrection. This isn’t in conflict with Herrera-Beutler’s account, but it does put a much more positive gloss on the conversation.

An article published by CNN on Feb. 12 provided a bit more detail on the Trump-McCarthy call using anonymous sources.

"A furious McCarthy told the then-president the rioters were breaking into his office through the windows, and asked Trump, ‘Who the f--- do you think you are talking to?’ according to a Republican lawmaker familiar with the call," CNN reported. The report said that details of the call were "described to CNN by multiple Republicans briefed on it."

The article added that "McCarthy pressed Trump to call off his supporters and engaged in a heated disagreement about who comprised the crowd."

PolitiFact does not use anonymous sources in its reporting, and could not independently confirm this account. But if the CNN report is accurate, McCarthy described a much less contentious conversation during his Fox News interview.

What about McCarthy’s portrayal of Trump’s actions that day outside of the phone call? Once again, McCarthy’s account is technically accurate but leaves out context.

• McCarthy said Trump "didn't see" the storming of the Capitol

For a president obsessed with cable television, this seems unlikely — but it’s not provably false.

The New York Times reported that, "at some point, Mr. Trump went to the Oval Office and watched news coverage of a situation that was growing increasingly tense."

But the only public reports we could find were news reports citing anonymous sources, so it’s impossible to independently verify that McCarthy’s version is wrong.

• Trump "put a video out later" and "said he would help."

According to a New York Times timeline published Feb. 13, Trump’s motorcade headed back to the White House at 1:19 p.m. after he finished speaking at a pro-Trump rally on the Ellipse. At 2:12 p.m., rioters breached the Capitol, leading Vice President Mike Pence to be rushed off the Senate floor.

At 2:38 p.m., Trump tweeted, "Please support our Capitol Police and Law Enforcement. They are truly on the side of our Country. Stay peaceful!"

At 3:13, he tweeted, "I am asking for everyone at the U.S. Capitol to remain peaceful. No violence! Remember, WE are the Party of Law & Order – respect the Law and our great men and women in Blue. Thank you!"

The timeline places the Trump-McCarthy call at "around 3:30 p.m."

At 6:01 p.m. he tweeted, "These are the things and events that happen when a sacred landslide election victory is so unceremoniously & viciously stripped away from great patriots who have been badly & unfairly treated for so long. Go home with love & in peace. Remember this day forever!"

The building was finally secured around 8 p.m. By that time, Trump had — as McCarthy said on "Fox News Sunday" — put out a video. However, it came more than two hours after the Capitol breach, as violence was continuing.

In addition, Trump’s calls in the video to have "peace" and to "go home now" were joined by sympathy for the rioters’ cause — a more mixed message than McCarthy indicated.

CNN, "The top Republican in the House is trying to rewrite history on the January 6 Capitol riot," April 26, 2021

Business Insider, "Trump reportedly watches up to 7 hours of cable news every morning before getting to the Oval Office as late as noon," April 24, 2020