A tweet from former President Donald Trump is shown as the House select committee investigating the Jan. 6 attack on the U.S. Capitol holds a hearing in Washington on July 12, 2022. (AP)

The latest House hearing on the events of Jan. 6, 2021, painted a picture of former President Donald Trump as a man running out of options. As of mid-December 2020, he had lost 60 out of 61 court challenges to state election results. His top campaign and White House advisers were telling him there was no evidence of significant fraud, and that he should prepare to concede.

On Dec. 14, 2020, the Electoral College voted and confirmed that Joe Biden had won the 2020 presidential election.

The House select committee investigating the attack on the Capitol focused on what Trump did from that point on.

"This tweet served as a call to action and in some cases as a call to arms for many of President Trump's most loyal supporters," said committee member Rep. Stephanie Murphy, D-Fla.

Above all, the committee aimed to show that Trump was in charge. That he heard the evidence his paid staff presented and ignored it. That he understood his influence over his followers and used it to stir them to action in an effort to remain in office.

Here are the key takeaways from the July 12 hearing.

Trump’s followers came and left when he told them to

The committee documented how Trump’s Dec. 19, 2020, tweet saying, "Be there, will be wild," mobilized thousands of his supporters to Washington for his rally on the White House Ellipse.

The post was one of more than a dozen tweets the president sent promoting the event — and it electrified pro-Trump groups across the internet, said Rep. Jamie Raskin, D-Md.

The committee played a montage that showed far-right personalities, including InfoWars founder Alex Jones, echoing Trump’s invitation and calling for "action." In one clip, a man who posts videos under the name "Salty Cracker" hailed Jan. 6 as a potential "red wedding" — a reference to a massacre in HBO’s "Game of Thrones."

The committee showed an anonymous Twitter employee expressing concern about the discourse on the platform. It showed Jim Watkins, the owner of a message board that hosted posts central to the QAnon conspiracy theory, saying he booked a trip to Washington after reading Trump’s tweet. And it showed numerous posts calling for violence on far-right forums such as thedonald.win.

"It's time for the DAY OF THE ROPE!" said one post Raskin read during the hearing. "WHITE REVOLUTION IS THE ONLY SOLUTION!"

One man who heeded Trump’s words was Stephen Ayres of Ohio. Ayres, who pleaded guilty to a charge of disorderly and disruptive conduct in a restricted building, shared on Facebook a poster that quoted Trump’s tweet and promoted the rally, according to court documents.

Ayres testified during the hearing that he went to Washington for Trump’s rally and "didn’t actually plan to go" to the Capitol, but that "we basically were just following what (Trump) said."

Ayres left the Capitol as soon as Trump tweeted a video urging people to go home, he told the committee. Ayres said he would have left earlier if Trump had said so.

Those close to Trump also recognized the power of his words. Former campaign manager Brad Parscale sent a text to Trump campaign adviser Katrina Pierson the night of the attack saying Trump’s "rhetoric killed someone," the committee revealed.

"This is about Trump pushing for uncertainty in our country," Parscale texted. "A sitting president asking for civil war."

A heated meeting took place at the White House on Dec. 18. On one side were Trump’s ad hoc outside advisers, including Rudy Giuliani, Sidney Powell and retired general Michael Flynn. They wanted him to fight the election results, and came with a draft executive order for the Defense Department to seize voting machines.

On the other side were members of the White House legal team, led by White House counsel Pat Cipollone. Repeatedly, they asked for evidence of a stolen election.

"At some point, you have to put up or shut up," Cipollone said during his deposition with committee investigators.

Trump’s outside team didn’t provide any proof because it had none. Giuliani’s investigator Bernard Kerik had sent an email to White House chief of staff Mark Meadows saying investigations were not the solution to Trump’s election problem.

"If the president plans on winning, it’s the legislators that have to be moved," Kerik wrote on Dec. 28, 2020.

Kerik’s lawyer told the committee, "it was impossible for Mr. Kerik and his team to determine conclusively whether there was widespread fraud."

Each of the earlier hearings centered on a particular piece of the effort to overturn the 2020 election, from urging Georgia election officials to find just enough additional Trump votes, to pressuring Vice President Mike Pence to reject results from particular states. Drawing tens of thousands of angry supporters to Washington was another piece of the puzzle.

Committee Vice Chair Liz Cheney, R-Wyo., said each element had something in common.

"Donald Trump participated in each substantially, and personally oversaw or directed the activity of those involved," Cheney said.

The latest hearing offered additional evidence of Trump’s intimate involvement in the scheme.

The draft was marked with the words "President has seen." 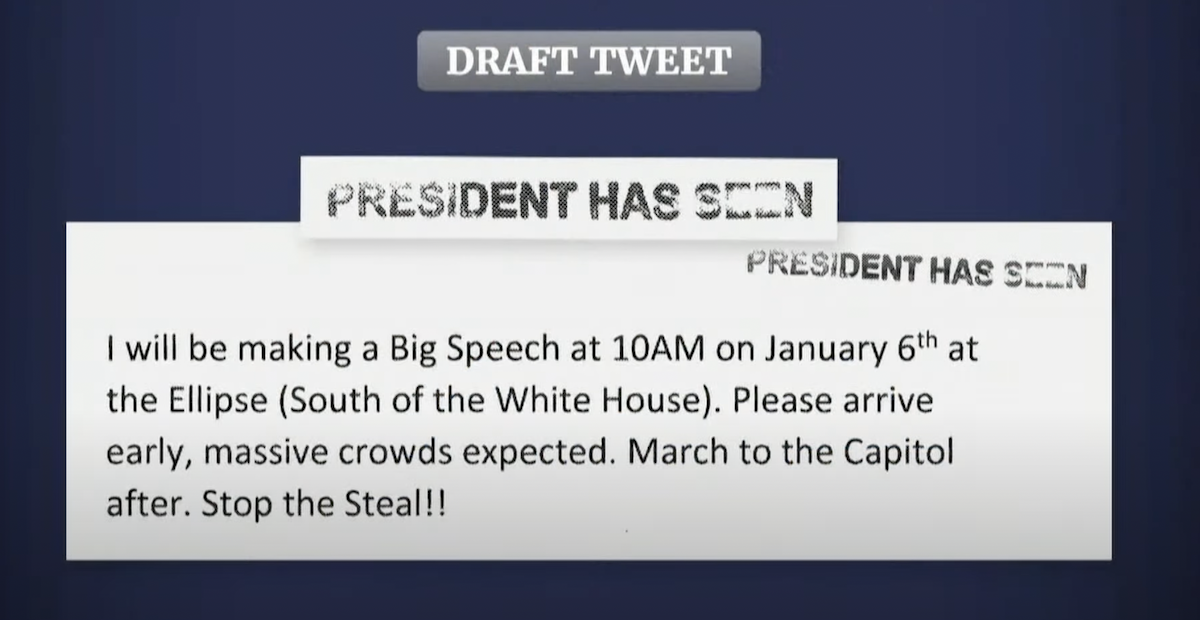 Cheney said that after the June 28 hearing, Trump tried to call a witness who the committee has yet to bring forward. The witness did not respond to the call. Instead, they called their lawyer, who contacted the committee. The committee informed the Justice Department.

"We will take any efforts to influence witness testimony very seriously," Cheney said.

RELATED: Read all of our fact-checks relating to Jan. 6

RELATED: The 2021 Lie of the Year: Lies about the Jan. 6 Capitol attack and its significance

RELATED: ‘Everything we trained for’: How the far-right Oath Keepers militia planned for violence on Jan. 6