Lamar Smith
stated on August 1, 2012 in a speech to the Austin-Oak Hill Rotary Club:
Says the top 20 percent of income earners pay nearly 70 percent of all federal taxes.

Outside a South Austin restaurant, U.S. Rep. Lamar Smith, R-San Antonio, shows the tax chart he keeps in his wallet with figures he had just used in speaking to the Austin-Oak Hill Rotary Club on Aug. 23, 2012. (Sue Owen photo/Austin American-Statesman)

Speaking in Austin recently, U.S. Rep. Lamar Smith said he believes Congress will reach a compromise to extend the so-called "Bush tax cuts" before they expire at the end of this year.

We were already working on a related fact-check of the San Antonio Republican: In an Aug. 1, 2012, press release, Smith touted his vote for the extension that day and said, "The top 20 percent of income earners (over $74,000) pay nearly 70 percent of all federal taxes."

Smith, whose district takes in part of Travis County, gave similar figures in his Aug. 23, 2012, speech to the Austin-Oak Hill Rotary Club. We’ll describe those but stick to checking his earlier 20-percent claim.

The Bush tax cuts are a mix of changes to tax rates, exemptions, deductions and credits enacted in 2001 and 2003 under President George W. Bush and extended in 2010.

Smith’s press release credits its numbers to a July 22, 2012, Wall Street Journal chart, which in turn cites a July 10, 2012, study of 2008-09 data by the nonpartisan Congressional Budget Office. The Journal’s bar chart shows the top 20 percent of U.S. wage-earners made $74,000 or more and paid nearly 70 percent of federal taxes.

Though there wasn’t a precise percentage on the bar chart, there was in the CBO’s report on its study: 67.9 percent.

Roberton Williams, a senior fellow at the Urban Institute-Brookings Institution Tax Policy Center, told us by email that allowing for rounding, Smith’s full statement was correct except for some clarification needed on the $74,000 salary figure (which was also on the Journal’s chart).

Whether to extend the Bush tax cuts for all taxpayers or for everyone except "rich" taxpayers is a major part of the battle in Congress, where Democratic plans have proposed extending the cuts for households with income below a cutoff point (which has ranged from $200,000 for individuals to $1 million). The Republican-majority House approved a plan extending the cuts for all taxpayers in the August vote Smith cited in his press release.

During the debate, politicians have made a range of claims about how much of the nation’s revenue comes from the wealthiest households. Smith’s 20-percent statistic avoids a pitfall PolitiFact has found in some of those statements.

The top 1 percent, the report says, earned $282,900 or more per single-person household and paid 22.3 percent of all federal taxes.

That’s closer to the stats Smith gave in his Austin speech, which included measures for the top 1 percent but referred only to share of federal income tax revenue.

He told us he usually gives rounded versions of the percentages, and produced his reference material -- a chart he keeps in his wallet, based partly on Oct. 24, 2011, data from the business-backed Tax Foundation -- showing the top 1 percent earned 16.9 percent of 2009 income in the U.S. but paid 36.7 percent of federal income taxes. 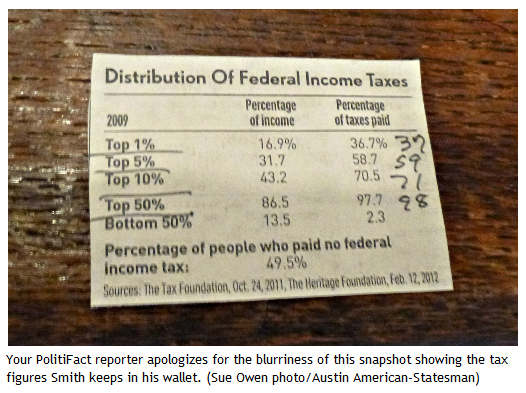 Smith said the top 20 percent of taxpayers shoulder nearly 70 percent of all federal taxes. According to the CBO’s latest math, it’s 67.9 percent. We rate his statement True.