Second-term San Antonio Mayor Julián Castro did not shy from celebrating his hometown during his keynote address to the Democratic National Convention.

Addressing the delegates assembled in Charlotte, N.C., Castro said that San Antonio residents recognize the value of investing in pre-Kindergarten and student college loans. "We're investing in young minds today to be competitive in the global economy tomorow," Castro said. "And it's paying off. Last year the Milken Institute ranked San Antonio as the nation's top-performing local economy."

Castro made the same claim in his keynote at the Texas Democratic Party convention. In that June 8, 2012, speech -- which we’ve previously dipped into twice -- Julián Castro said his city’s investments in infrastructure and education paid off "late last year when San Antonio was ranked as the top-performing local economy by the Milken Institute."

Indeed, we confirmed, San Antonio topped Milken’s 2011 list of the nation’s best-performing large metropolitan areas, rocketing up from 14th place the year before. Its rise is part of a recent trend in which Texas cities have dominated the list as the nation recovers from the 2007-09 recession.

The economic think tank’s annual list, which Milken spokesman Conrad Kiechel told us by phone has been issued in its current form for "more than a decade," was described in a Dec. 30, 2011, Texas Tribune news story as "a ranking that measures American metropolitan areas based on their ability to create and sustain jobs."

Milken’s 2011 report on the best-performing cities says the index gives priority to job and pay gains, then some weight to several technology measures in relation to national averages: the local growth in high-tech gross domestic product, the concentration of tech industries and how many of 25 specific tech industries are concentrated there. Some measures are weighed across five-year spans, to flatten out extreme swings, and the most recent year, "to capture recent momentum." 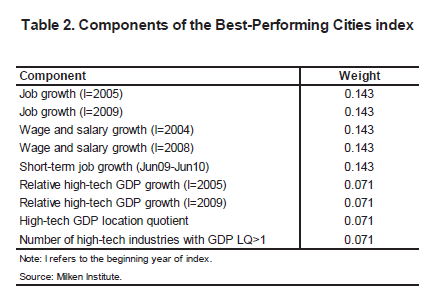 In recent years, the Tribune said, "companies have flocked to San Antonio, making it an economic center rivaling Houston and Dallas." In contrast to those cities, though, "San Antonio has attracted high-wage jobs, capitalizing on its booming medical research industry."

The Tribune story said InCube and Medtronic were the latest bioscience companies to move to San Antonio, which was already home to global headquarters for Valero Energy, Clear Channel Communications, USAA insurers and the H-E-B grocery chain.

The San Antonio Express-News credited the city’s rise to reasons "including military base realignment, drilling in the Eagle Ford Shale and the growth of health care" in a Dec. 16, 2011, news story.

Texas’ rise in the ranks, the Express-News wrote, came partly because of downturns in other parts of the country. The story quoted research economist James Gaines of Texas A&M University’s Real Estate Center: "Our growth rate and advancement isn't all that wonderful. We've managed to stay flat or have very small positives. But because everybody has so many negatives, we look so much better."