Austin’s ban on disposable shopping bags is "all for show," according to freshman state Rep. Drew Springer.


"In San Francisco, litter from bags actually increased after enacting their ban," he said in a press release issued March 5, the day he introduced his "Shopping Bag Freedom Act."


After Austin’s ban went into effect March 1, 2013, retailers could no longer offer thin, so-called single-use plastic and paper bags at checkout counters. The City Council passed it in 2012, saying the plastic bags, in particular, often end up as litter and are costly to clean up.


And did bag litter rise after the San Fran ban?


Springer’s chief of staff, Travis McCormick, said by email that the lawmaker’s statement was based on the City of San Francisco Street Litter Re-Audit conducted in April-May 2008, which showed that plastic retail bags constituted 0.64 percent of all large litter (items more than 4 square inches). That was a 6.7 percent increase over the 0.6 percent share shown in the city’s April-May 2007 audit, McCormick said, so there was a slight bump in such litter despite the ban.


We looked over the city’s three litter audits, for 2007 through 2009, and here’s the thing: We’re talking about differences of about two plastic bags in each year’s litter samples.


For the audits, observers counted pieces of litter at more than 100 sites, classified the found items as large or small, then tallied them in dozens of subcategories.


About half of San Francisco’s large litter in each audit came from "fiber materials" such as paper, cardboard and napkins.


The "second-most significant material type" was plastic, accounting for 20 percent to 24 percent of total large litter in the surveys. In each of the three years, the largest category of plastic was "miscellaneous," accounting for 4.7 percent to 9 percent of all large litter and defined as "litter that is broken up or weathered such that auditors cannot identify it with certainty but can identify the litter as plastic." 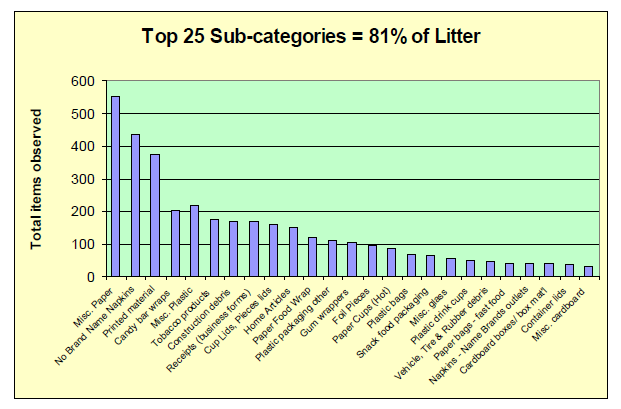 Rodriguez called the 2009 audit "a better snapshot" of the ban’s effects primarily because the 2008 audit was conducted only a few months after the ban started to take effect in November 2007. The 2008 litter audit counted litter samples taken from April 7 to April 18, 2008. That would have been before large pharmacies had to stop giving out disposable plastic bags on May 20, 2008, according to a Chronicle news story published that day.


Finally, because Springer’s claim referred to "litter from bags," we looked at San Francisco’s total bag data even though the city’s ban did not address paper bags. In contrast, Austin’s City Council banned both plastic and paper bags except for bags considered reusable -- such as ones with handles.

As of October 2012, San Francisco barred all retailers, large and small, from providing single-use plastic bags, according to other Chronicle news stories and news blog entries. Also, the city began requiring retailers to charge a 10-cent fee for each other bag they give out. Both requirements will apply to restaurants starting in October 2013.

A litter audit conducted before the ban took full effect found two more retail plastic bags than the previous year’s sampling. However, the next audit, launched after the ban had been fully in place for nearly a year, saw a two-bag drop.


Maybe this means that such litter is decreasing, though we would want more research to reach definitive conclusions.


Telephone and email interviews with Guillermo Rodriguez, director of policy and communications, San Francisco Department of the Environment, March 15-20, 2013