Maxey Scherr
stated on January 23, 2014 in an interview:
"We have more women living in poverty in this state than almost anywhere else."

El Paso lawyer Maxey Scherr, who seeks the Democratic U.S. Senate nomination, described the Obamacare law as vital to the health of millions of Texans in an interview with progressive Houston blogger Charles Kuffner.

"We have more women living in poverty in this state than almost anywhere else," Scherr said in the interview, which Kuffner recorded and placed online Feb. 4, 2014.

By email, Scherr campaign spokesman Victor Reyes told us Scherr based her conclusion on state rankings in "Texas on the Brink," a March 2013 report by the Legislative Study Group, a Texas House caucus chaired by Rep. Garnet Coleman, D-Houston. According to the report, Texas ranks fourth nationally in the percentage of women living in poverty, a conclusion attributed in a footnote to information sorted by the Urban Institute and Kaiser Commission on Medicaid and the Uninsured. 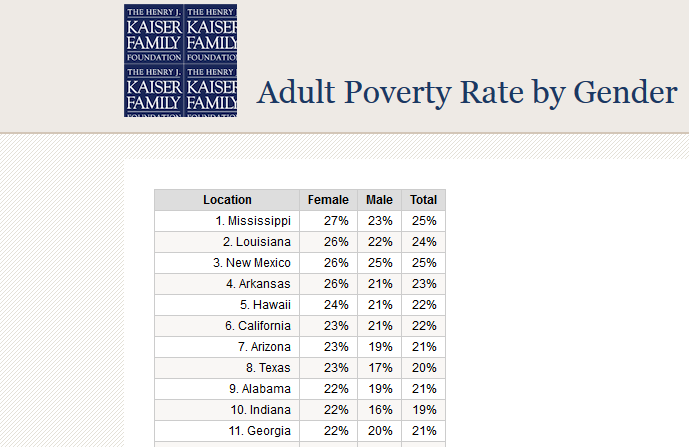 A Kaiser explanatory note says the women-in-poverty percentages reflect the share of female adults aged 19-64 with incomes less than 100 percent of the federal poverty level. For a family of four in every state but Alaska and Hawaii, that poverty level was $22,350 in 2011 and $23,050 in 2012, according to the note. 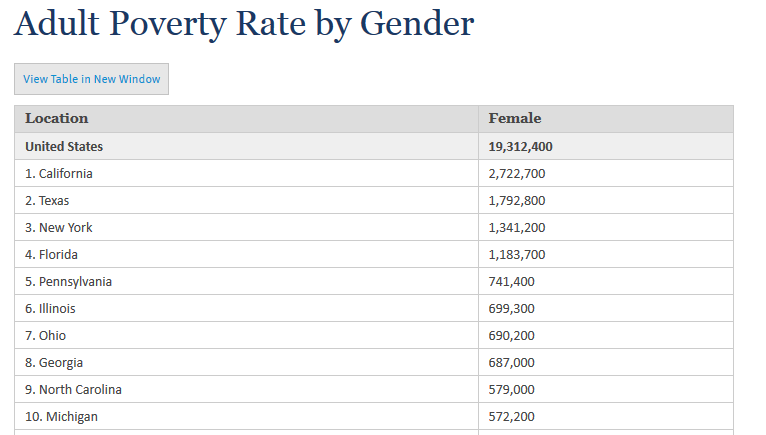 Next, we wondered if the presented rates and rankings were up to date.

Nope: By email, Jennifer Lee, a researcher for the Austin-based Center for Public Policy Priorities, which advocates for programs serving the poor, sent us a chart she built using the latest estimates from the American Community Survey for 2012 as overseen by the U.S. Census Bureau.

In raw numbers, California led the nation with 2 million women in poverty, according to the chart, followed by Texas (1.4 million) and Florida and New York (1 million each).

Lee said: "Poverty is consistently higher for females than for men across the country. There are a lot of causes of this, but one is that many women work in historically underpaid jobs.  Women who must raise children alone are especially vulnerable."

Scherr said more women live in poverty in Texas than almost anywhere else.

In raw numbers, California in 2012 had the most women in poverty followed by Texas.

But poverty rate is a more reasonable yardstick to compare states. The rounded Texas rate--indicating about 18 percent of its women aged 18-64 lived in poverty in 2012--tied the state for fifth with some other states. Breaking out each state's rate to tenths of percentage points, though, shows 14 states with a greater share of women in poverty than Texas.

We rate this claim, which could have been more precise, as Mostly True.