Rush Limbaugh
stated on July 22, 2014 in comments on his radio show:
The United States is the leading nation in the world "with the highest amount of doubt about the conventional wisdom of climate change."

After a 26-year crusade against "environmentalist wackos," Rush Limbaugh has emerged triumphant, according to the conservative radio host himself.

Citing recent findings by market researchers Ipsos MORI, Limbaugh said on his July 22, 2014, radio show that the United States leads the pack in questioning climate change, and he’s taking all the credit.

"Fifty-four percent of Americans agreed with the statement, 'The climate change we are currently seeing is largely the result of human activity,’ " he said. "Why would the U.S. be the leading nation with the highest amount of doubt about the conventional wisdom of climate change? Why do you think that would be?  I think that's exactly right: Me. There's just no other explanation"

Whether Limbaugh is giving praise where praise is due, we can’t know for sure. But we did want to check out his claim that America leads in climate change skepticism.

Respondents were asked about their attitudes on climate change. The countries were then ranked by the percentage who agreed with the statement. Here’s how the U.S. fared:

Based on the results, the United States had the lowest percentage of people say that climate change is: 1. Largely man-made, and 2. Leading the world toward environmental ruin.

The United States also tied India for the highest percentage of people agree that climate change is a natural phenomenon that happens from time to time, though more Americans disagreed with the statement than Indians.

All of that gives Limbaugh’s claim credence, though there are a couple of caveats.

Ipsos MORI research director Bobby Duffy said Limbaugh’s conclusion that the United States is the most skeptical country is "probably too simple."

While the numbers indicate that the United States is the least likely nation among those surveyed to see climate change as a man-made issue, the majority of Americans -- albeit, not by a huge margin -- still believe that climate change is anthropogenic.

Moreover, Americans aren’t scoffing at the general idea of climate change. The United States ranked near the middle of the nations when asked if there is too much of a fuss made about the environment. And Americans recycle at average rates -- though Duffy noted recycling could be motivated by other concerns such as use of resources and socialization.

The survey itself is somewhat limited. While more than 1,000 people were surveyed in some countries including the United States, other countries such as Argentina, Belgium, Poland, Russia, Saudi Arabia, South Korea, Sweden and Turkey included around 500 individuals. Duffy explained that this was due to client interest in the those markets, as Ipsos MORI is a market researcher.

Who was surveyed is also important. Ipsos MORI said the survey was representative of the general adult population in "developed" (shorthand for greater Internet access) nations such as the United States. But in developing nations, Ispos said it surveyed a "more affluent and ‘connected’ population" to represent an emerging middle class, according to Duffy.

To some pollsters, this method of surveying is problematic. It doesn’t make sense to compare the elites of one country to the general population of another, said University of Maryland public policy researcher Steven Kull.

Still, Ipsos’ findings are fairly consistent with the most recent Pew Research Center survey -- where 67 percent of Americans said that there is solid evidence of global warming, and 44 percent say it’s mostly due to human activity. A separate Pew Global poll found that when stacked up against 22 other countries, the United States was one of the least concerned about global warming, right under China and Britain and outranking only Poland and Pakistan. (Interestingly, Ipsos found that 91 percent of people in China said the world was heading for an environmental disaster unless we change our habits. Duffy said this can be explained again by the sampling approach and mode of interview.)

One of the most comprehensive polls we found was Gallup’s 2010 survey of 111 countries. Though nearly all Americans were aware of global warming, 47 percent -- the largest percentage in the world -- said it was due to solely natural causes. About half said global warming was at least partly anthropogenic, a 12-percentage-point drop since the last Gallup poll in 2008.

That’s slightly below the world’s average but far below the rates in developed countries. 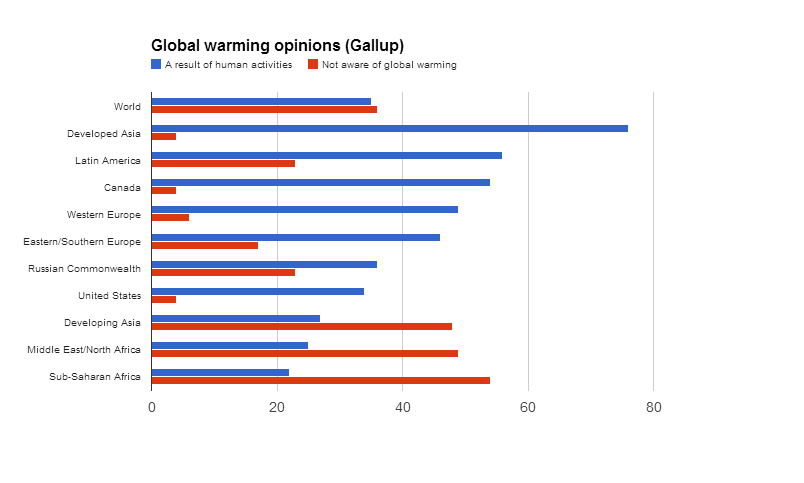 Lower percentages of belief in human-caused climate change in developing nations make sense, given correspondingly lower rates of awareness, education and literacy, said Riley Dunlap, an environmental sociologist at Oklahoma State University. But in the United States, it’s politics that is causing the skepticism.

Limbaugh said that the United States is "the leading nation with the highest amount of doubt about the conventional wisdom of climate change."

While he cites an exact figure reported by Ipsos MORI, the study itself doesn’t capture the belief of general populations, only those with an Internet connection. Other polls we looked at indicate that a good proportion of developing countries have higher rates of doubt. But among peers, the United States is one of the most -- if not, the most -- skeptical when it comes to believing climate change has human factors.

Interview with Steven Kull, public opinion researcher at the University of Maryland, July 28, 2014

CBS, Americans more skeptical of climate change than others in global survey, July 23, 2014