Lee Leffingwell
stated on February 25, 2014 in his "State of the City" address:
Austin is "a city that has basically doubled in size every 25 years or so since it was founded."

Austin Mayor Lee Leffingwell, set to relinquish his office after this year, warned in his last "State of the City" address that growth continues to pinch.

Setting up his pitch for voter approval of an inner-city rail line, Leffingwell said Austin is "a city that has basically doubled in size every 25 years or so since it was founded."

Take that, all ye who bemoan how much the city has grown (oh-so crowding the roads) just since you arrived.

To our inquiry, mayoral spokesman Reyne Telles told us by email that Leffingwell was referring to population growth, not geographic expansion.

Telles added that Leffingwell based his declaration on a chart posted on the city’s web page devoted to local and regional demographics as overseen by Ryan Robinson, the city demographer.

The chart shows the city’s population in many of the years from 1840 through 2013.

That would cover Austin’s lifetime. An Austin History Center web page says the city, originally Waterloo, was purchased to be the capital of the Republic of Texas in March 1839 and renamed in honor of Stephen F. Austin. The city was incorporated on Dec. 27, 1839.

In Austin’s early years, the chart indicates, the population doubled even more frequently than Leffingwell said. Specifically, the population surged six-fold from 1840 to 1860, going from 553 to 3,493, according to the chart, while over the next 20 years, the number of residents increased three-fold, to 11,013.

To get the most up-to-date sense of growth from the chart, we also looked at whether the mayor’s claim holds up if we look back in time starting in 2013 when Austin had 842,750 residents.

Telles of the mayor’s office also pointed us to a city report featuring a graphic (below) showing Austin’s population growth since 1900. "Austin’s growth has been very close to doubling every 20 years," the report says. 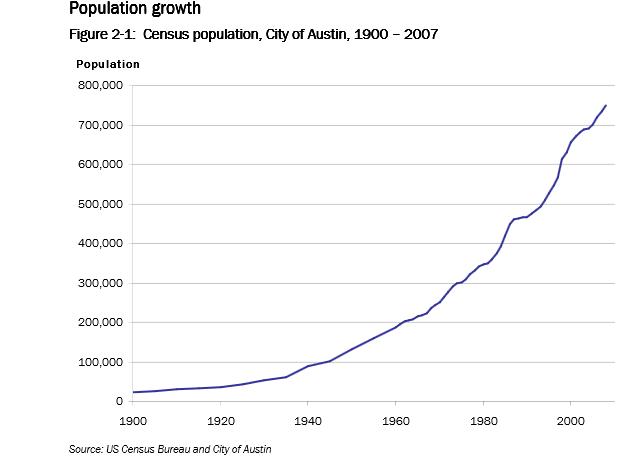 Leffingwell said Austin is a "city that has basically doubled in size every 25 years or so since it was founded."