Greg Abbott
stated on February 17, 2014 in his State of the State address:
"Texas has more full-time state employees per capita than California and Illinois."

"Now many of us in this room including myself have ridiculed states like California and Illinois as bastions of failed big government," Abbott said in his Feb. 17, 2015, State of the State address in the Texas House chamber. "You’ll be as surprised as I was to learn that Texas has more full-time state employees per capita than California and Illinois."

"That was shocking – and I think it must be changed," Abbott continued.

Abbott’s office didn’t respond to our request for factual backup for his Texas-to-Californ’ois comparison, but R.J. DeSilva, staff spokesman for the Legislative Budget Board, pointed out a chart in the agency’s latest Fiscal Size-up report, published in 2014. The chart indicates that in 2011, Texas state government had 124 full-time equivalent positions for every 10,000 residents, the same ratio as Wisconsin, and also lower than the ratios for 42 states. Still, as Abbott declared, California, with 108 such positions per 10,000 residents, and Illinois, with 102, were among a few states with fewer full-time positions in state government for every 10,000 residents. 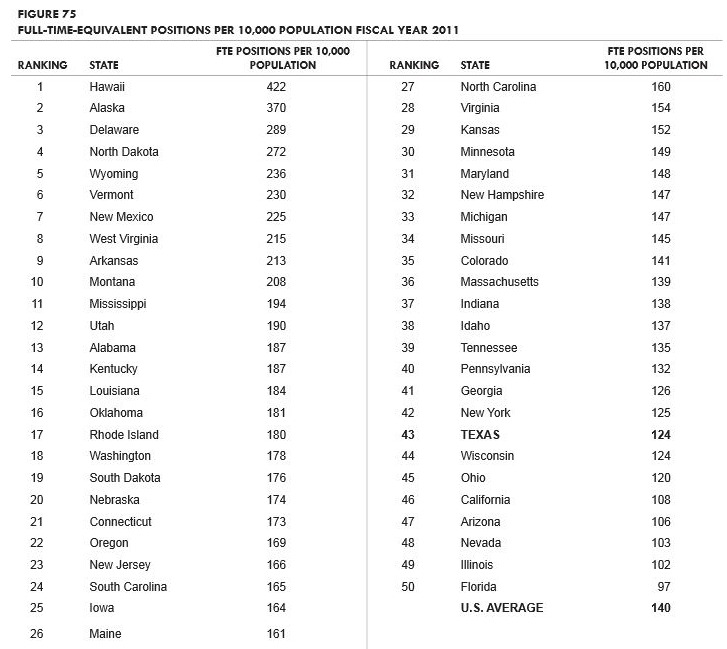 Seeking more up-to-date data, we emailed a U.S. Census Bureau spokesman, Robert Bernstein, who  guided us to the bureau’s March 2013 survey of state government employment, its latest tally. To reach per-capita counts, Bernstein recommended we compare the figures to the agency’s July 2013 state-by-state population estimates, which he sent us.

We focused on the bureau’s "full-time employment" counts for each state government, which reflected all agencies including institutions of higher education--though not part-time workers, who fill many roles in public colleges and universities, a bureau expert, Jesse Willhide, advised.

We ran these figures by Kate Johanns of the Texas Public Employees Association, which lobbies on behalf of Texas state employees and retirees, and Eva DeLuna Castro, a fiscal affairs expert for the Center for Public Policy Priorities, which advocates for programs serving low-income residents. Both pointed out the bureau’s state government employee counts might seem inflated because they roll in workers at public colleges and universities, which draw on income streams besides the state budget Abbott was talking about.

Moreover, Castro suggested, comparisons of employee ratios between states don’t account for different ways different states deliver services. Knowing "what’s a local responsibility in one state versus another is important, because it’s the combined effort that matters," Castro emailed. "That’s why many analysts doing state-level comparisons use the State + Local FTE (full-time equivalent) count." Her nudge led us to tap census bureau data for 2013 covering state and local full-time government employees; Texas had 5 for every 100 residents; Illinois 4.4; California 3.8.

Hoping for out-of-state insight, we reached Scott Moody, a New Hampshire-based senior fellow with the Illinois Policy Institute, a research group that says it generates policy ideas promoting personal freedom and prosperity in the Land of Lincoln.

With Moody’s help, we downloaded a chart indicating that in 2013, Texas had more state/local full- and part-time government workers for every 100 workers in the private sector than California or Illinois:

Abbott said that to his shock, Texas has more full-time state employees per capita than California and Illinois.

That's so. However, this claim lacked substantial context; Abbott cherry-picked two of a few states with lower per-capita state-employee rates than Texas, failing to note Texas ranks among states with the lowest proportion of state government workers. Notably too, its ratio in 2013 trailed the national average.