Ted Cruz
stated on June 29, 2015 in an interview on NPR:
The Supreme Court’s views "are radically out of step with public opinion" regarding its decision to legalize same-sex marriage nationwide.

Cruz, who is running for president, is an outspoken critic of the court’s 5-4 ruling in Obergefell v. Hodges that overturned the country’s remaining same-sex marriage bans. In an interview on Morning Edition June 29, NPR’s Steve Inskeep talked with Cruz about how he and other Republicans will respond.

"The concern of conservatives seems to be that the court was following public opinion," Inskeep said. "Same-sex marriage, for example, is much more popular than it used to be."

"If the values had changed so much, there would be no need for the court to act because people would have acted democratically to change their marriage laws," Cruz added. "That hadn't happened, which is why the court stepped in and (threw) out the laws that the people did adopt."

Given the swelling support for same-sex marriage in recent years, we wanted to dig into Cruz’s claim that "the court’s views are radically out of step with public opinion."

To be clear: The claim could be interpreted as speaking about the court’s decisions generally. But given the context of the statement and our interaction with Cruz’s campaign, it seems he was talking about same-sex marriage specifically, so that’s what we’ll focus on.

There’s a couple of different ways to look at this, but Cruz’s characterization is an exaggeration.

A look at the polls

On whether the American public supports same-sex marriage, there is no question. Numerous 2015 polls have found that a majority of the country -- around 60 percent -- favors same-sex marriage. The majority holds in most demographic groups.

Support for same-sex marriage has risen dramatically in the past few years, as demonstrated by this Gallup chart, spanning 20 years: 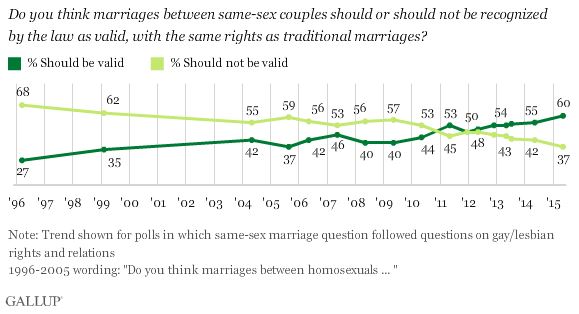 But there’s another question that doesn’t have a clear answer -- whether Americans think the decision to legalize same-sex marriage should have been left to the states, rather than having a decision made at the national level. This is essentially the question presented to the Supreme Court.

Cruz spokesman Brian Phillips said "it is incontrovertible that a majority of Americans believe that the decision should be left to the states," pointing to a February 2015 CBS News poll that found 56 percent of Americans hold this position.

However, other polls show the opposite: that a majority of Americans think same-sex marriage should be decided nationally. A June 2015 poll by CBS News and the New York Times found that just 41 percent of Americans think this is a state issue, while 54 percent think there should be a single federal law.

Looking through a collection of the latest polls on gay rights, neither side stands out as the obvious position of the American public.

Given the mix of polling results on this question, "it's not the case that the court's ruling was, as Cruz claimed, ‘radically out of step with public opinion.’ Rather, Americans were less definitive on this aspect of the gay marriage issue than others," said New York University professor Patrick Egan, who studies public opinion and gay rights issues.

Phillips noted that a majority of states had laws banning same-sex marriage prior to this year’s Supreme Court and earlier lower court decisions -- more than 30 state bans in 2013, before the rulings started to roll out. Because state legislatures or the voters directly passed these laws, Phillips said they "reflected the popular will of the people in those states."

But timing is important here. These same-sex marriage bans might have reflected popular opinion at the time they were passed -- nearly all came about before 2010 -- but public opinion on gay marriage has changed significantly since then.

"If public opinion is changing -- and the data show it was -- it is possible for both the original legislative decisions and the subsequent court decisions to be consistent with public opinion," said Peter Enns, a professor of government at Cornell University who studies public opinion and government response.

By 2014, at least 50 percent of residents in 32 states supported same-sex marriage -- including quite a few states that had gay marriage bans prior to court decisions, according to the Public Religion Research Institute. A majority opposed same-sex marriage in only eight states.

Additionally, most political scientists would say public opinion is best measured via representative surveys, not by the laws currently in place, Egan noted.

Cruz said the Supreme Court’s views "are radically out of step with public opinion" regarding its decision to legalize same-sex marriage nationwide.

Most polls say around 60 percent favor same-sex marriage -- a high point. At the state level, the majority holds in most cases.

Cruz’s staff said that Americans think legalizing same-sex marriage should be a state responsibility rather than something decided at the federal level. But different polls show different results on that point. There isn’t an obvious majority one way or the other.

Certainly there is a good chunk of the population that opposes the Supreme Court’s decision, but it’s definitely not a clear majority. We rate Cruz’s claim Mostly False.