Other Space
stated on July 14, 2015 in in a Change.org petition:
"By declaring that Pluto was no longer a planet, the (International Astronomical Union) put into place a planetary definition that would have even declassified Earth as a planet if it existed as far from the sun as Pluto does."

This image sent July 13, 2015, from the New Horizons spacecraft shows the best-ever view of Pluto. A few days later, scientists said the dwarf planet has large frozen plains in its heart-shaped area, which is next to rugged mountains of water ice. (NASA)

The world’s best-ever glimpse of Pluto from the New Horizons spacecraft is giving the "Pluto question" new life: Should the icy orb be once again considered the ninth planet of our solar system?

Images of the dwarf planet inspired a tide of Internet reaction last week, including memes, a funny interview between Pluto loyalist Stephen Colbert and astrophysicist Neil deGrasse Tyson, and a petition signed by more than 4,100 people to bring Pluto back to full planet status.

The petition on Change.org, which was started by the producers of the Yahoo! web series Other Space, wants world astronomers to reconsider their 2006 decision to classify Pluto as a dwarf planet in its August assembly in Honolulu.

"Not long after New Horizons was launched in 2006, the International Astronomical Union stripped Pluto of its planethood because it was different than the other eight planets that we committed to memory," the petition reads. "By declaring that Pluto was no longer a planet, the IAU put into place a planetary definition that would have even declassified Earth as a planet if it existed as far from the Sun as Pluto does."

As crazy as it sounds, we wondered if the theoretical argument in the petition could really be accurate: Could Earth really be a dwarf planet in an alternate universe? (Assuming, of course, that Earth could form so far from the sun, which is not realistic.)

Ahead of Pluto’s demotion almost a decade ago, astronomers had been wrestling over what to do with the icy, diminutive planet as other bodies in the Kuiper Belt and elsewhere came to focus, including an even bigger world called Xena (renamed Eris). Should those bodies also be planets, or are they, like Pluto, something else?

In 2006, the IAU came up with a resolution on how a planet ought to be defined. The IAU definition says a planet is a celestial body that meets the following criteria:

Pluto passed the first two criteria, but it flunked the third about clearing the neighborhood around its orbit.

We wondered if Earth would also fail to clear its neighborhood if it switched places with Pluto. And what in the heck does "clearing the neighborhood" mean anyway?

Experts told us to think of it like a planet taking a broom to its orbit.

" ‘Clearing the neighborhood’ is like sweeping up and tossing out an accumulation of debris once and for all, where no outside source replaces it," said Steven Soter, a resident research associate at the American Museum of Natural History, who also proposed a method of measuring the cleanliness of a planet’s orbit.

However, Soter says the IAU definition is misleading because no planet can ever entirely clear its neighborhood, as asteroids and comets often leak back into orbital zones from the outside, he said.

"The Earth even in its present location has not entirely ‘cleared’ its orbital zone," Soter said. "Asteroids and comets clobber it every few million years."

Soter would rewrite the definition to say that a body must "dynamically dominate" its orbital zone in order to be considered a planet. This loosened definition means a planet could keep its neighborhood relatively clear in spite of constant debris coming in from the outside.

Still, Pluto would not pass the planet test even under this term, Soter said. Pluto only dominates its own satellite system, and it has no influence on the rest of the Kuiper Belt that can be seen.

If Earth were in Pluto’s position, Soter said it would still be a planet — but only marginally — based on its neighborhood-clearing abilities.

Soter pointed to this wonky-looking graph to explain his point. 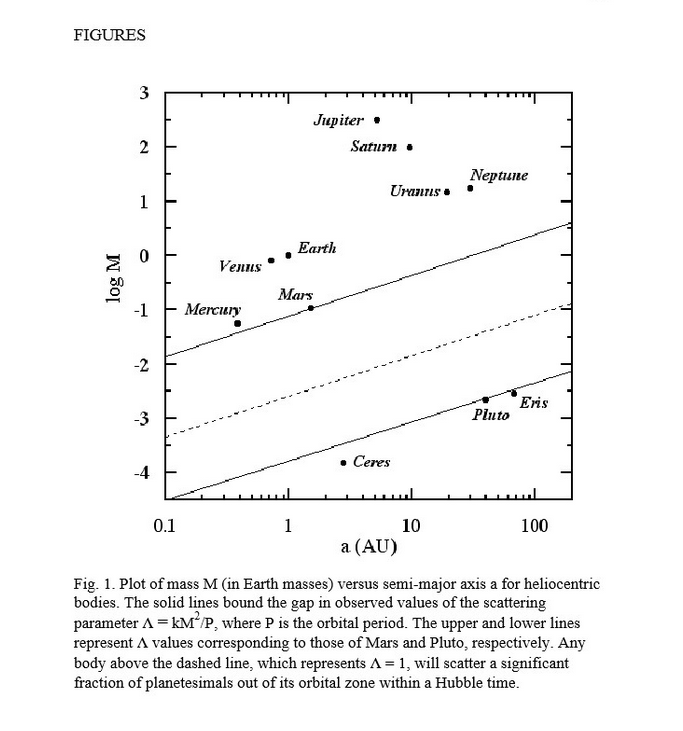 The horizontal axis shows how far a planet is from the sun, while the vertical axis shows a planet’s mass relative to Earth. Every diagonal line on the graph shows how good a planet is at keeping its neighborhood relatively clear despite debris floating back in.

Some planets (the larger ones at the top, such as Jupiter and Saturn) clear out more debris, and others (Mercury, Mars, the ones straddling the topmost diagonal line) clear out less.

The farther a planet gets from the sun, the harder it is to keep its neighborhood clean.  Right now, Earth does pretty well for itself. But move our planet right from 1 AU to 40 AU (Pluto’s location), and Earth is not as good as clearing its neighborhood.

"The Earth in Pluto's orbit would have about the same dynamical power as Mercury or Mars, so it would (only) marginally dominate its new orbital zone," Soter said.

So, Earth would still be a planet, but it would be close, he said.

There is also another way of looking at this definition. Soter proposed a way of defining planets by looking at how significant a planet-like body is compared to other space debris in its zone. (Think of comparing the mass of the broom you’re using to the mass of garbage still left behind.)

Would Earth still be a significant object when compared to everything else in Pluto’s neighborhood? Maybe. There is no way to predict and compare masses, he said.

Arguments that support the petition

The equation behind the graph was proposed by planetary scientists Harold Levison and Alan Stern, who is the lead investigator for the New Horizons mission to Pluto.

Stern’s advocacy for Pluto being a planet is well-known, and he stressed in a phone interview that he has a very different take on this question than Soter. As he has said for years, Stern thinks Earth would not be able to clear Pluto’s zone and therefore not be a planet under the IAU parameters.

The farther a planet (or planet-like body) is from the sun, the larger an object has to be to clear its orbital zone — which means Pluto, 4.67 billion miles from the sun, has it pretty rough out there.

"The Kuiper Belt zone (the zone Pluto has to clear) is bigger than the zones from Mercury to Neptune," Stern told PunditFact.

"The IAU definition is analogous to putting an apple in the middle of the table, then moving it to the edge of the table and declaring it is no longer an apple," he said.

Both Stern and Soter faulted a time crunch at the 2006 meeting that resulted in a rushed set of criteria for planethood.  When the IAU proposed its new definition, Stern said, it was done "overnight" and no specific calculations were used. One of the concerns among scientists there was that if Pluto were admitted as a planet, then so would other space bodies. Some attendees worried there would be "too many planets to memorize," Stern said.

The concerns were "not scientific … (but) somewhere between personal preference and political," Stern wrote in the Space article.

There are also other concerns about the IAU’s decision. Only about 16-25 percent of the registered astronomers at the IAU meeting voted on the definition. Other scientists have also pointed out that the IAU’s definition is limited to our solar system and does not consider planets that might exist outside the solar system.

We reached out to a representative from IAU to comment but did not hear back.

Other Space's petition claims, "By declaring that Pluto was no longer a planet, the (International Astronomical Union) put into place a planetary definition that would have even declassified Earth as a planet if it existed as far from the sun as Pluto does."

Putting aside the fact that this could not actually happen, we heard very different opinions from scientists on whether the definition would really exclude Earth if it were in Pluto’s shoes.

Pluto was demoted as a planet because it could not clear its orbital zone, a requirement established by the astronomers union. However, the IAU definition is ambiguous because no planet can ever completely clear its orbital zone. Absent a clearer definition, scientists disagree about whether Earth would be declassified in this far-fetched scenario, though it certainly would not do as good a job at "clearing the neighborhood" as it does now.

The claim on the petition is partially accurate but leaves out important details — the main one being that we’ll never know for sure. We rate it Half True.