Jan Brewer
stated on July 8, 2015 in comments on CNN:
"We know from ... the federal data, that they only stop or apprehend one out of four illegal people crossing our border."

Brewer, who championed tough immigration laws in Arizona, said on CNN that studies and research showing no distinguishable rise in crime among illegal immigrants are wrong.

"We know from their data, from the federal data, that they (border patrols) only stop or apprehend one out of four illegal people crossing our border," Brewer said.

PunditFact decided to find out if this fact istrue.

We reached out to Brewer to see if she could provide us with the "federal data" she was looking at, and also to clarify what she meant by "our" border -- did she mean the Arizona border, the border states, or the entire U.S. border? But we did not hear back.

In the absence of an answer from Brewer, PunditFact looked around for available federal data that could support Brewer’s claim.

First, we mapped out all U.S. Border Patrol sectors. The majority, of course, are found along the Southwest border of the United States. According to 2014 data from the U.S. Border Patrol, this area was responsible for about 98.5 percent of all apprehensions. A similar breakdown is evident in previous years as well.

In total, there were 479,371 apprehensions were made along the Southwest border in 2014. According to Brewer, that means about 1.4 million illegal immigrants weren’t stopped and were able to cross into the country.

"Since then, the Border Patrol has increased significantly; there are miles and miles of fences; substantial technology has been deployed. It seems unreasonable to think that they apprehend a smaller fraction."

And even still, the 1 in 3 figure was at best a rough estimate, Passel said. The government did not seem to keep a record of the effectiveness of Border Patrol apprehensions in the 1980s and 1990s, and since then, that trend has only mildly improved.

The most recent data PunditFact could find dated back to 2011 and included a lot of caveats.

The U.S. Government Accountability Office published data about the effectiveness of the Border Patrol at various stations in the Southwest sector from 2006-11. The government measures "apprehensions," "turn backs" and "got aways." Here is a chart printed by the Washington Post that summarizes that data: 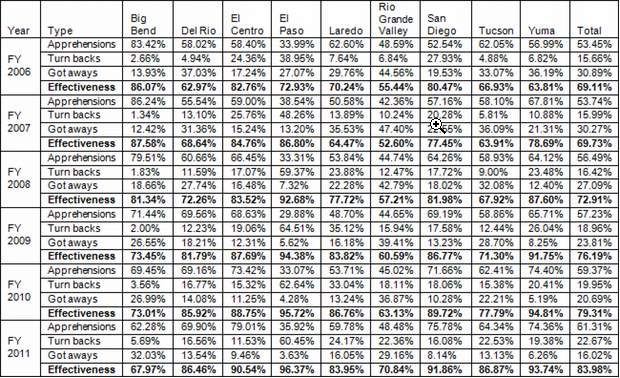 In short, according to the Government Accountability Office, 84 percent of people trying to cross the Southwestern border in FY 2011 were either apprehended or ran back to Mexico. Only 16 percent "got away," meaning they presumably made it into the United States.

You can go through the numbers for yourself in more detail, but in no way do they support the idea that three in four illegal immigrants crossing the border makes it to the United States.

It’s no better if you specifically focus on Brewer’s home state of Arizona. Looking at sectors covering the Arizona border (Tucson and Yuma), patrols apprehended 64 percent and 74 percent of border crossers respectively. In both cases, another 20 percent of people turned back to Mexico -- meaning only between 6 and 13 percent of people made it across the border successfully.

Limits of the data

Obviously, counting the number of people who managed to avoid detection is a tricky business.

According to the 2012 GAO report, "indications of illegal crossings are obtained through various sources such as direct agent observation, referrals from credible sources (such as residents), camera monitoring, and detection of physical evidence left on the environment from animal or human crossings."

The "detection of physical evidence left on the environment" is known as "sign-cutting." It includes searching for evidence such as "dusty footprints, torn cobwebs, broken twigs, (and) overturned pebbles." Of the 85,467 people who "got away" across the Southwest border in 2011, about 83 percent of them were identified using "sign-cutting."

The accuracy of "sign-cutting" is debated.

In one 2013 article published in the Huffington Post, Border Patrol Chief Mike Fisher said that sign-cutting "is not an exact science."

On the other hand, Border Patrol agent Richard Gordon, who uses sign-cutting frequently, appears to trust the method. "It's tried, and it's true, and it works," said Gordon in the same article.

Both "turn backs" and "got aways" use sign-cutting as a source of information.

Another problem with the numbers may be caused by data overlap. According to the 2012 GAO report, sometimes there could be "cases where the same turn back (or "got away") identified by a camera is also identified by sign-cutting. Double counting may also occur when agents in one zone record as a got away an individual who is (later) apprehended and then reported as an apprehension in another zone."

Border Patrol agents also seem to disagree about some of the published statistics.

"Ask any line agent in the field and he or she will tell you that at best we apprehend 35-40 percent of the illegal immigrants attempting to cross," said Border Patrol agent Chris Cabrera in a Breitbart.com article.

Brewer said that, based on federal data, "they only stop or apprehend one out of four illegal people crossing our border." The federal data doesn’t support that.

According to the Government Accountability Office, 61 percent of people trying to cross the Southwestern border in FY 2011 (the last year available) were apprehended and another 23 percent were stopped and ran back to Mexico. Only 16 percent "got away," meaning they presumably made it into the United States.

It’s obviously hard to know the real numbers with certainty given the nature of the topic, but Brewer erroneously pointed to federal data that does not back her up. We rate her claim Mostly False.

The Washington Post, "Border security is the key to immigration reform. So how do we measure it?," June 21, 2013

Breitbart.com, "Border Patrol Agent: We Are Punished for Reporting Illegal Alien Groups of More Than 20," March 17, 2015