Rand Paul
stated on July 17, 2015 in a campaign rally in Houston:
"We borrow a million dollars every minute."

At a campaign rally in Houston, Sen. Rand Paul, R-Ky., talked about one of his favorite dislikes: the national debt.

"You have people in Washington who do things you would never, ever approve of," said Paul, a Republican presidential candidate, in his July 17, 2015, remarks. "I’ll give you an idea. Does anybody here think it’s a good idea to borrow money from China to send it to Pakistan? We borrow a million dollars every minute."

Does the country really borrow a million a minute? We decided to check it out.

To evaluate Paul’s claim, we considered the federal deficit -- the difference between the government’s revenue intake and spending, which in recent years has been negative. To raise cash to keep the government running under a deficit, the Treasury has to take on debt.

There are 525,600 minutes in a year, so borrowing $1 million a minute would mean the government borrows $525 billion a year.

The federal deficit in fiscal year 2014 was $483 billion. The Congressional Budget Office’s projected deficit for 2015 is $486 billion.

Of course, though, it’s not as though the country is literally borrowing $1 million every single minute. Though while the national debt is growing overall, the debt accumulates unevenly, in fits and starts, from day to day as specific bills come due.

Let’s also add some context. While in recent years, the country has borrowed "a million dollars every minute," this is actually a big improvement from the rate during the Great Recession.

Based on the same calculation we used earlier, the government borrowed more than $2.6 million a minute in 2009, at the height of the recession. That rate has slowed every year since.

Additionally, the million-a-minute number doesn’t look so dramatic when you compare it to the fact that the U.S. economy generates about $33 million per minute in income, said Neil Buchanan, an expert in law, economics and the national debt at George Washington University Law School.

Economists generally agree that debt and deficits are only meaningful as a percentage of a country's income, rather than as a raw number, Buchanan added. 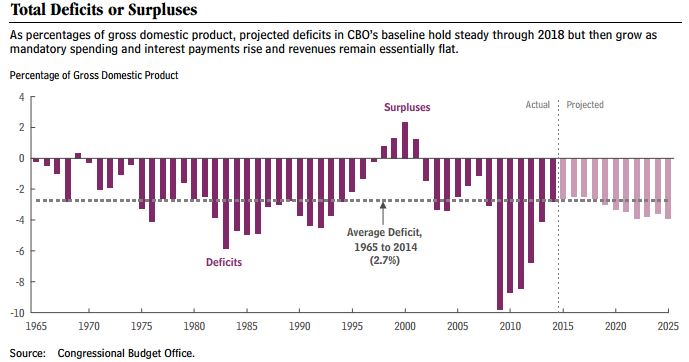 "The question should be how fast the debt is growing in relation to GDP. If GDP is growing faster, then the country can service the debt," said Linda Bilmes, a professor and expert in national budgetary issues at Harvard University.

Paul said, "We borrow a million dollars every minute."

For the country to borrow $1 million a minute, the annual government deficit would have to be about $525 billion. In 2014, the deficit was $483 billion, and it’s projected to be $486 billion in 2015. So Paul’s estimate is a little on the high side. On balance, we rate it Mostly True.