Texas Democratic Party
stated on February 12, 2015 in a press release:
More than 1 million Texans live without affordable health care because Rick Perry failed to "partner with the Legislature to find a Texas solution to closing the coverage gap."

By not teaming with legislators, Rick Perry left many Texans without reasonable health care, a Democratic group says.

The Texas Democratic Party popped this claim a day after the former governor and 2016 Republican presidential prospect told New Hampshire residents: "People criticize us for having a large number of uninsured. That’s what Texans decided they wanted. They did not want government forcing everyone to buy insurance."

According to a Dallas Morning News blog post datelined Bedford, N.H., Perry was referring to Texas’ refusal, under his leadership, to create an insurance marketplace--leaving it to the federal government to do so--or to expand Medicaid as permitted under the federal Affordable Care Act, known as Obamacare.

Javier Gamboa, the Democratic Party’s spokesman, reacted in a Feb. 12, 2015, press release: "Perry should be ashamed of himself for saying that the people of Texas did not want increased coverage and expanded access to healthcare. More than one million hardworking Texans are living without affordable care because of his failure to partner with the Legislature to find a Texas solution to closing the coverage gap."

Is all of this so?

Perry won his last term as governor in 2010, the year the then-Democratic-controlled Congress and President Barack Obama agreed to mandate health coverage for most Americans. The law also permitted states to widen access to Medicaid, the federal-state health insurance, with Uncle Sam covering related costs for three years. But Perry was adamant about Texas not expanding; in July 2012, he rejected the deal, calling the offer a brazen intrusion into state sovereignty.

And in 2013, the Republican-led Legislature, in accord with Perry, "shot down federal efforts to cover uninsured, low-income Texans by expanding access to Medicaid," according to a May 2013 Austin American-Statesman news story.

Texans in the 'coverage gap'

So what is this "coverage gap" and how many Texans fall into it?

In 2014, uninsured Texans earning 100 to 400 percent of the federal poverty level began to be offered subsidies to help buy insurance on an online healthcare exchange or marketplace. However, as the Statesman story said, Texas adults living below the poverty line—then $11,170 for an individual, $19,090 for a family of three—won no change in access. Some 947,000 uninsured Texas adults were living below the poverty line at the time, the story said.

Mindful that figure is years old, we hunted fresh data.

Replying to our requests for elaboration, the Democratic spokesman, Gamboa, pointed out news stories, including a January 2015 Associated Press news story stating: "Texas leads the nation in uninsured, with nearly a quarter of the state’s population—6.4 million people—lacking health insurance." That story said the Obamacare law "mandates expanding Medicaid to residents with incomes less than 138 percent of the federal poverty level, but a Supreme Court ruling left expansion up to each state and Texas said no. "That created a ‘coverage gap’ of more than 1 million Texans who aren’t poor enough to qualify for Medicaid," the story said, "but don’t earn enough to receive the law’s new subsidized health insurance."

But there also are other estimates.

In particular, Anne Dunkelberg of the Center for Public Policy Priorities, which advocates for low-income residents, initially nudged by email that according to the center’s interactive Health & Wealth County Checkup website, nearly 1.2 million to nearly 1.3 million Texans fit the coverage gap. Drawing on an October 2013 report from the Kaiser Family Foundation, itself rooted in Census Bureau surveys asking whether respondents had health insurance, the center reached a rough estimate of 1,151,410 to 1,208,090 Texans in the coverage gap. The foundation is a nonpartisan health policy research group,

Also, the center notes, a February 2014 report by the Urban Institute, limited to estimates for major urban counties, supports the estimate of 1,293,100 Texans in the coverage gap.

Most recently, a November 2014 Kaiser report said that in states that do not expand Medicaid, many adults fall into a ‘coverage gap’ of having incomes above Medicaid eligibility limits but below the lower limit for Marketplace premium tax credits," meaning the Obamacare subsidies.

The report, starting from the Census Bureau’s Current Population Survey results for 2014, offered this illustration of its estimated nearly 4 million citizens in the gap--one quarter of them, or 948,000, living in Texas--who would have been newly eligible for Medicaid if their state had expanded coverage: 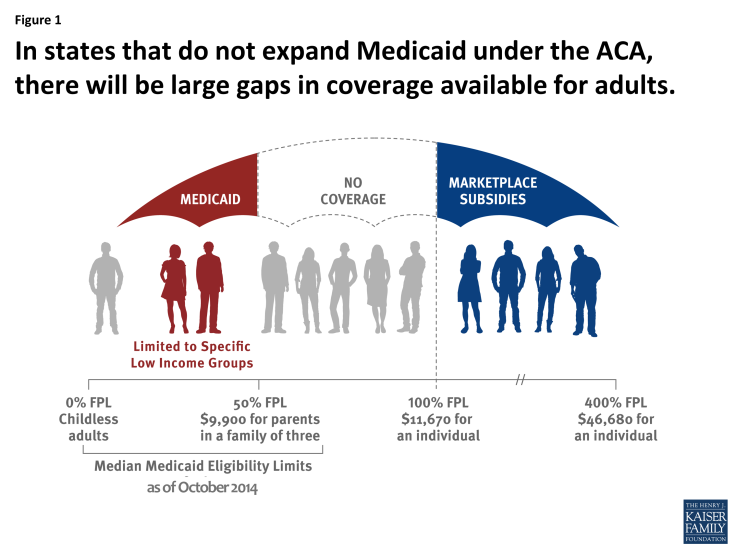 By email, Kaiser spokesman Chris Lee told us the 948,000 figure was the organization’s latest estimate of Texans lacking insurance who would be eligible for Medicaid if Texas agreed to expand access.

Experts told us there is one other  way to use Census Bureau surveys to estimate Texans in the coverage gap. By email, a bureau demographer, Carla Medalia, guided us to results from the 2013 American Community Survey indicating that nearly 1.4 million Texans aged 18 through 64 were uninsured and living below the poverty level--meaning they weren’t eligible either for Medicaid in Texas or for Obamacare subsidies; they’re potential gappers. Dunkelberg cautioned, though, that the bureau figures don’t filter out residents living in the country without legal authorization or legal immigrants here less than five years; members of both subgroups would be ineligible for Medicaid.

On balance of late, Dunkelberg said, she’s been saying around 1 million Texans fall into the gap.

Next, we wondered if individuals in the gap live without affordable care, as the Democrats said.

Nationally, the Kaiser report offered its read of what kinds of Americans fit the coverage gap.

"While nearly half of people in the coverage gap report that their health is excellent or very good, nearly a fifth (18%) report that they are in fair or poor health," the report said. "These individuals have known health problems that likely require medical attention."

The Democratic Party said more than 1 million Texans live without affordable health care because Perry failed to "partner with the Legislature to find a Texas solution to closing the coverage gap."

Per the latest estimates, it’s safe to say around a million Texas adults fall into the coverage gap for making too little money to qualify for insurance subsidies and also remaining ineligible for Medicaid unless Texas expands access as encouraged by the Obamacare law and rejected by Perry and the state’s ruling Republicans. Less certain is what kind of care is available to those people in the gap and how affordable it might be for them.

We rate this statement, which lacked clarification, Mostly True.

UPDATE, 5:45 p.m., March 1, 2015: Today after this fact check posted, we made various changes to our original version to eliminate typos, improve the writing and clarify our ruling, which did not change.

News story, "‘Texas solution’ to Medicaid expansion on the ropes," Austin American-Statesman, May 7, 2013