Jeb Bush
stated on February 27, 2015 in a CPAC appearance:
Eliminating affirmative action in admissions in Florida led to "more African American and Hispanic kids attending our university system" than before.

Former Gov. Jeb Bush still hasn’t announced a 2016 presidential run, but he is trumpeting his conservative record on subjects like affirmative action.

"I eliminated affirmative action by executive order -- trust me, there were a lot of people upset about this," Bush said at the Conservative Political Action Conference on Feb. 27, 2015. "But through hard work we ended up having a system where there were more African American and Hispanic kids attending our university system than prior to the system that was discriminatory."

It’s been some time since Bush ended race-based admissions policies, so we wondered if more African American and Hispanic students are attending state universities now than when affirmative action was in place.

Bush signed an executive order implementing the "One Florida" plan in 1999, which banned racial preference in state school admissions. It also created a program guaranteeing that the top 20 percent of high school graduates would gain admission to a post-secondary institution and some funding for need-based financial aid.

Florida is now one of a handful of states preventing race-based admissions policies and the only one to do so by executive order. Other states had done so by ballot initiative, a route that ran into obstacles in Florida when supporters tried and failed to put a constitutional amendment on the 2000 ballot.

Bush’s spokeswoman did not comment, but the first thing we should note is that in terms of sheer numbers, Bush has some evidence to back himself up.

But those numbers were going up as overall enrollment was going up dramatically. From 1999 to 2013, the State University System increased enrollment by 45 percent, much higher than the national average of around 25 percent in the same time period.

The question really is, did the ratio of black and Hispanic enrollment go up after Bush’s executive order? Well, yes and no.

We took a look at all state university fall enrollment, broken down by black and Hispanic students, going back to 1995. Data from the Florida Board of Governors show that black enrollment declined slightly in recent years from 14 percent in 1999 to 13 percent in 2013. Hispanic enrollment, meanwhile, have almost doubled to nearly 24 percent. 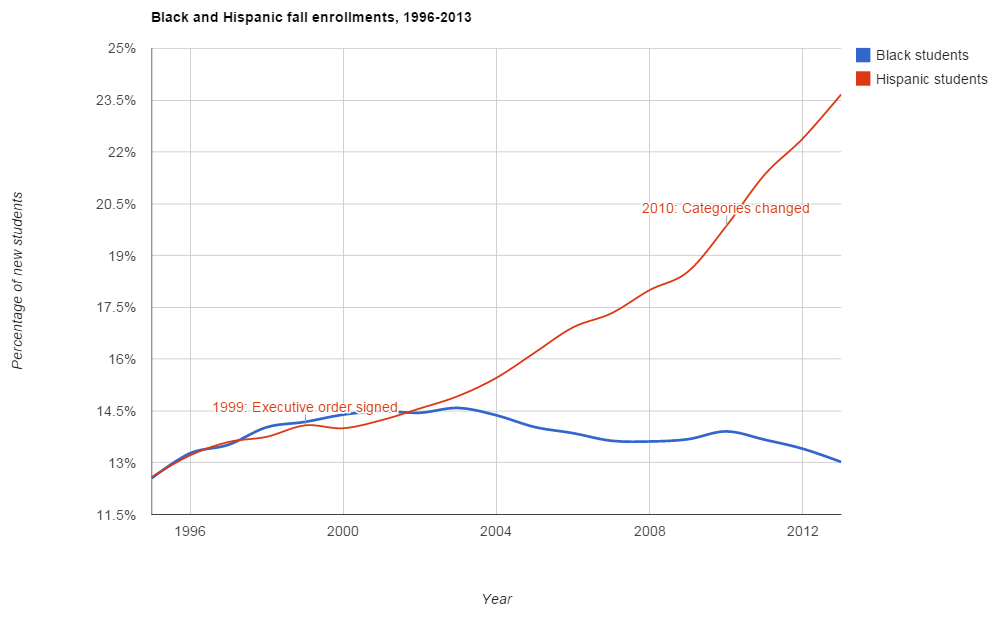 One thing to keep in mind is that post-2010 data can’t be fairly compared to pre-2010 data. That’s because the U.S. Department of Education in 2007 decided to change racial and ethnic classifications by the 2011-12 school year. The new categories included a "multiple races" choice and weighted classifications for students who answered "yes" when asked if they are Hispanic. Choosing Hispanic overrides racial selections and results in more students categorized as Hispanic.

The reclassification also has resulted in fewer students reporting as black and white, according to the Florida Board of Governors, which oversees the State University System. But as the graph shows, the trend for more students to report as Hispanic started even before the Department of Education decided to change the categories.

Experts told us there are several reasons for these changes, but it doesn’t appear it’s because of the One Florida program.

Troy Miller, associate director for research and policy for the student advocacy group the Florida College Access Network, said demographics are part of the equation. Overall enrollment is up because there are more K-12 students in the state than there were in 1999, and more of them (including black and Hispanic students) are graduating than before. Also, college admissions are going up in large part because of the Bright Futures program, started in 1997.

Bush said that eliminating affirmative action in admissions led to "more African American and Hispanic kids attending our university system" universities than before.

The raw numbers of black and Hispanic students are up, but the percentage of black students in the State University System is down slightly since Bush’s 1999 executive order. The number of Hispanic students has gone up considerably, but that is partly because of a recent change in how students report ethnicity during the admissions process.

There’s no hard evidence Bush’s One Florida program had much to do with the enrollment changes. Experts say demographics, graduation rates and state-sponsored scholarship money have had more influence.

Note: This claim was fact-checked as part of a reward to our Kickstarter campaign to live fact-check the 2015 State of the Union. Thanks to all who contributed.

State Impact, "More Than Half of Black and Hispanic Students Will No Longer Qualify For Bright Futures Scholarships," April 1, 2013

The Civil Rights Project at Harvard University, "Appearance and Reality in the Sunshine State: The Talented 20 Program in Florida," accessed March 10, 2015

Interview with Brittany Davis, Florida Board of Governors spokeswoman, March 5, 2015