Ted Cruz
stated on March 17, 2015 in an interview on "Late Night with Seth Meyers":
"Many of the alarmists on global warming, they’ve got a problem because the science doesn’t back them up. In particular, satellite data demonstrate for the last 17 years, there’s been zero warming."

The world’s on fire, according to Sen. Ted Cruz, R-Texas -- but it’s not because of global warming.

On Late Night with Seth Meyers March 17, host Meyers brought up an incident that had happened several days earlier -- in which Cruz seemed to frighten a 3-year-old girl when he said "Your world is on fire." (He was talking about foreign policy.)

"At first I got excited because I thought maybe you were coming around on global warming, but that’s not the case," Meyers said. "Because I think the world’s on fire -- literally."

Cruz responded, "My view actually is simple. Debates on this should follow science and should follow data. Many of the alarmists on global warming, they’ve got a problem because the science doesn’t back them up. In particular, satellite data demonstrate for the last 17 years, there’s been zero warming. None whatsoever. It’s why -- you remember how it used to be called 'global warming' and then magically the theory changed to 'climate change'? The reason is it wasn’t warming, but the computer models still say it is, except the satellites show it’s not."

We’ve fact-checked statements like Cruz’s before -- that global warming has stopped over the past 17 years, and that’s reason to be skeptical of accepted science about global warming -- and found the claims lacking. (Here’s the head of a human-caused climate change skepticism organization, as well as Sen. Marco Rubio, R-Fla., and environmentalist-turned-skeptic Patrick Moore.)

Cruz does have a point: There hasn’t been any significant warming over the past 17 years. However, the scientific mainstream counters that it’s misleading for climate change skeptics to assume this flat trend line will continue indefinitely, or that it negates the long-term likelihood of global warming.

NASA’s Goddard Institute for Space Studies tracks global land-ocean temperatures using a temperature index -- that is, how much the temperature deviates from the long-term average: 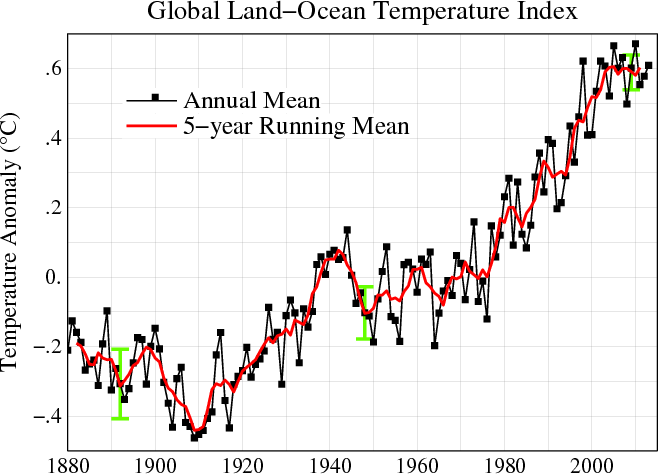 As the chart shows, Earth’s land-ocean temperatures accelerated their increase in the 1970s, setting off a new era of rising sea levels and melting sea ice. Temperatures spiked about 17 years ago in 1998 and have plateaued at similarly high levels ever since.

Scientists say it’s worth noting that 1998 was an outlier year that involved a strong El Niño with abnormally warm ocean temperatures. El Nino refers to an occasional pattern in ocean currents that significantly affects the weather globally by releasing heat into the atmosphere.

So global temperatures have not changed much since 1998, aside from minor fluctuations. The 14 hottest years on record have all occurred since that peak in 1998, according to the National Oceanic and Atmospheric Administration.

By starting his 17-year count with 1998 -- an abnormally hot year because of the El Nino -- Cruz exaggerated the nature of the pause.

"Looking at the last 17 years is cherry picking," said Brian Soden, a professor of meteorology and physical oceanography at the University of Miami.

The Intergovernmental Panel on Climate Change, a United Nations-affiliated organization that shared the 2007 Nobel Peace Prize, has specifically addressed claims about the period since 1998. The panel argues that short-term trends are likely a result of natural climate variability and are not representative of the long-term climate outlook. The panel attributes the recent temperature plateau to changes in volcanic and solar activity.

Data always fluctuates somewhat, scientists say. "The global average air temperature over the past 150 years has been characterized by overall rise," but superimposed on this general trend are "periods, lasting as much as several decades, of stronger warming, little change and even cooling," said Mark Serreze, director of the National Snow and Ice Data Center and a professor of geography at the University of Colorado-Boulder, told PolitiFact for a previous fact-check.

Barring dramatic cuts in carbon emissions, Serreze suggested that 50 years from now, "the period of slower warming from the late 1990s to present will appear as just another blip on the overall pattern of warming."

And many scientists fully expect warming to pick up again, though there is less agreement on exactly when that will start. The United Kingdom’s weather office published three reports in which they asserted that temperatures will likely resume their rapid rise soon, though on an uncertain timetable.

Climate scientists are still trying to understand the pause, said Rob Jackson, a professor of earth system science at Stanford University. However, he said he would be willing to make a bet with Cruz that "globally, the next 10 years will be warmer than any previous 10-year period since recordkeeping began."

Cruz Spokesman Phil Novack said the senator was not intending to cast doubt on climate change science. He said Cruz recently voted to affirm that climate change is real (though the statement voted on did not attribute those changes to human activity, a key point for climate-change activists who say changes to human activity will be required to keep the environmental impact from worsening).

Rather, Novack said, Cruz was trying to emphasize the fact that "the computer models that climate scientists rely on predicted the Earth should be significantly warmer than it is now" based on satellite measurements. What Cruz is casting doubt on is the idea that we should make major policy decisions affecting the livelihoods of millions of people in the name of theoretical conclusions that in fact cannot currently be drawn from science or data," he added.

For support, Novack pointed to a blog by physicist Carl Mears, vice president of satellite data company Remote Sensing Systems. In the blog, Mears noted that the company’s satellite-collected data shows that there has been little warming in the past 17 years, and that the observed temperatures were less than what had been predicted by many computer simulations.

However, Mears also cautioned that the discrepancy between the model and observation should not be reason to doubt the climate’s sensitivity to human-caused activity. Many factors other than scientific modeling errors, he said, could explain the discrepancy between the models and the observations -- including satellite measurement errors, factors external to the climate (such as volcanic activity), or random climate fluctuations.

Jackson of Stanford added that while computer prediction models aren’t always perfect, there are other ways to confirm scientists’ general predictions about the rate of global warming and future climate change. For example, even though the global temperature has stayed relatively stagnant since 1998, this winter saw a record-low of Arctic sea ice, and ocean temperatures are rising rapidly.

The fact that the past 17 years since 1998 have been so warm even without a strong El Nino of the sort that occurred in 1998 might in itself be an indication of an overall warming trend and climate change, said John Reilly, co-director of the Joint Program on the Science and Policy of Global Change at the MIT Sloan School of Management.

Reilly also cautioned that models are reasonably good at measuring long-term trends, but their ability to predict specific years or decades (such as Cruz’s 17-year time period) is "limited."

"The models are unable to capture some of the exact aspects of how the heat accumulation is being allocated between atmosphere and ocean," Reilly said. "But the fundamental idea that greenhouse gases cause the earth to warm is not undermined."

"A temporary slowdown does not negate 200 years of climate research," Jackson added.

Cruz does have a point: There’s been little global temperature change since 1998, and the temperatures measured are lower than what many computer models had predicted.

However, focusing on that period essentially means cherry-picking a timeframe that starts at an extremely warm year and ignores that the first decade of the 21st century -- even as it’s been stable -- has been the warmest on record. While scientists don’t deny that there’s been a recent "pause" in warming, they expect it to be a temporary trend. Not only is one anomalous period not enough to undercut longer-term projections, but other types of measurements do show evidence of continued global warming over the past two decades, including rising ocean temperatures and shrinking sea ice.

Cruz’s statement contains an element of truth but ignores critical facts that would give a different impression, so we rate it Mostly False.

Remote Sensing Systems, "The Recent Slowing in the Rise of Global Temperatures," Sept. 22, 2014

Email interview, John Reilly, co-director of the Joint Program on the Science and Policy of Global Change at the MIT Sloan School of Management, March 19, 2015

Email interview, Mark Serreze, director of the National Snow and Ice Data Center and a professor of geography at the University of Colorado-Boulder

Email interview, Brian Soden, professor of meteorology and physical oceanography at the University of Miami, March 19, 2015