Jeb Bush
stated on October 28, 2015 in a Republican presidential debate in Boulder, Colo.:
"My plan actually gives the middle class the greatest break: $2,000 per family."

Former Florida Gov. Jeb Bush said at a recent debate that his plan to streamline the tax system will benefit everyone, but it will benefit the middle class the most.

"Look, the simple fact is that my plan actually gives the middle class the greatest break: $2,000 per family," Bush said during the Oct. 28, 2015, CNBC debate. He added that simplifying the tax code will boost economic growth.

We wondered, does the middle class really stand to benefit the most from Bush’s proposed tax cuts? That could be accurate if you examine the rates in a particular way, experts told us, but in practice it’s likely the highest earners would see the real windfall from Bush’s plan.

Bush released his tax plan in September 2015, with an emphasis on streamlining the code, lowering rates and easing up on corporate taxes. Some analyses point out the plan could add to the budget deficit.

• Cuts the number of personal income tax brackets from seven to three with rates of 10, 25 and 28 percent, down from a current top rate of 39.6 percent;

• Lowers the top corporate tax rate and taxes on capital gains to 20 percent;

• Limits itemized deductions to 2 percent of adjusted gross income, except for charitable contributions, and eliminates deductions for state and local taxes;

• Increases standard deductions for single filers by $5,000 and for joint filers by $10,000 and doubles Earned Income Tax Credit for childless workers.

It’s the last point that Bush’s campaign has claimed will be one of the biggest boosts to the middle class.

There are myriad ways to define "middle class," but several experts told us a good rule of thumb is a family of four making the median family income, which was $53,657 in 2014. When we asked the Bush campaign for specifics, they referred us to the plan online, which includes a table showing their calculations for how the changes would affect certain levels of income. 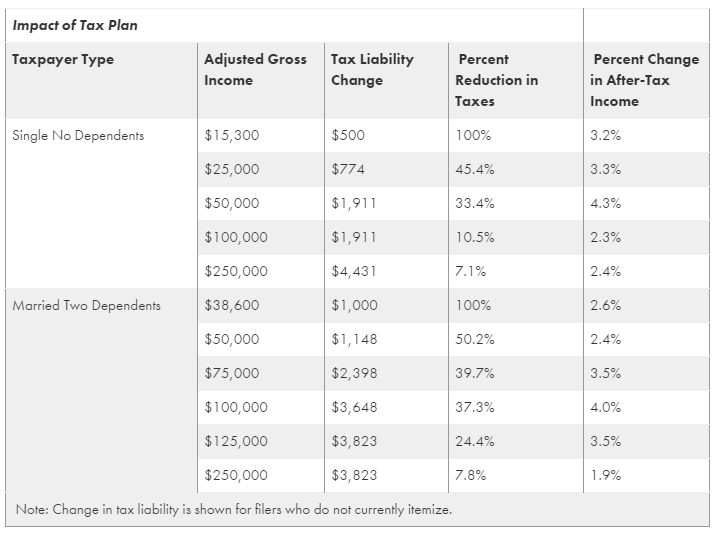 According to Bush, the savings after paying taxes are a higher percentage gain for middle incomes than for higher incomes. Some analysts and economists we contacted said that $2,000 figure could be about right, considering the difference in the 25- and 28-percent tax brackets Bush proposes.

But one caveat is that his comparison is only counting people who take the standard deduction when filing their income tax returns. Because people with higher incomes tend to itemize, that means the sample of wealthy people to which Bush is comparing his middle class savings is much smaller than it could be.

"Wealthier people are not, as a general rule, filling out the 1040EZ and calling it a day," said Williamson said. "The vast majority of high-income people itemize their taxes ... and cut their taxes a great deal by doing so." (Think Warren Buffet paying just 17 percent.)

Now, Bush’s plan does limit the value of itemized deductions, and many middle-class families would benefit from a higher standard deduction. Some researchers think this plan will significantly decrease the number of people who itemize by simplifying their returns.

Other analyses, however, show that the highest earners get a much bigger break than Bush has implied, because they would benefit disproportionately from changes like lowering corporate taxes and repealing the estate tax.

The pro-business Tax Foundation examined the plan, too. A projection based on exceptionally robust growth showed middle earners saw their adjusted gross incomes go up as much as 12.9 percent over an unspecified length of time. The top 1 percent’s incomes would go up 16.4 percent.

Middle-class families could potentially realize a higher percentage tax break, based on Bush’s plan. But that’s only counting those who would file their tax returns using the standard deduction, something the wealthy aren’t likely to do.

Even with caps on itemized deductions, a range of experts said the wealthiest Americans stand to benefit more than the middle class, thanks to Bush’s proposed changes in corporate, estate and other taxes.

Bush’s statement contains an element of truth but ignores critical facts that would give a different impression. We rate it Mostly False.