Donald Trump won’t apologize to Ben Carson for questioning the neurosurgeon's religion, but he agrees with Carson’s thoughts on health care.

Trump, who is trailing Carson in new polls in Iowa, suggested on the campaign trail that Carson’s Seventh-day Adventist faith wasn’t "down the middle of the road." Appearing on ABC’s This Week, Trump said he "didn’t say anything bad" about Carson, called Carson’s proposal for personal health savings accounts a "very good idea," and took the opportunity to knock down a different opponent.

"People’s — I don’t know if you have been watching lately over the last couple of weeks — people’s premiums, George, are going up 35, 45, 55 percent," Trump said on Oct. 25. "Their deductibles are so high nobody’s ever going to get to use it. So ... Obamacare is turning out to be a bigger disaster than anybody thought."

On average, premiums have risen by about 5.8 percent a year since Obama took office, compared to 13.2 percent in the nine years before Obama. Is it true that we’ll see insurance plans jacked up 35 to 55 percent in 2016?

We reached out to the Trump campaign but didn’t hear back. Experts we talked to and the data show that while there are examples of premium increases that large, they’re not the norm.

Double digits for some plans

Let’s begin with a brief primer on premium hikes. Under the Affordable Care Act, insurers planning to increase their rates by more than 10 percent have to submit their proposals for federal review. In many states, the companies also have to negotiate their prices with a state insurance commissioner.

Generally, the finalized premiums will be equal to or lower than the proposed rates, according to Larry Levitt of the Kaiser Family Foundation, a leading nonpartisan health policy research center. With five days left before open enrollment begins on Nov. 1, rates are likely already approved or amended, but not all them have been publicized.

Trump has a point that some insurers have requested increases that hit high double digits.

"Yes, some people in some plans through some carriers in some states are, indeed, looking at rate hikes of ‘35 to 50 percent’ if they stick with those plans in 2016," said Charles Gaba, who runs the popular blog ACAsignups.net, which tracks Obamacare enrollment.

"This is not completely off the wall. Many of the popular plans requested high increases," said Gail Wilensky, a health economist and the head of Medicare and Medicaid under George H.W. Bush. "Those hikes will affect more people than some may think."

She pointed out that Blue Cross Blue Shield, a prominent insurer with a significant amount of enrollees, proposed rate hikes of 14 to 38 percent in Illinois and 50 to 65 percent in New Mexico.

But that’s not telling the entire story either, according to the data.

Just 7 percent of all plans in the federal exchange had a proposed rate hike of 30 percent or higher, estimates Agile Health Insurance, which bills itself as "an affordable alternative to Obamacare." That translates to average increases at far lower levels than what Trump said.

Looking at finalized rates for the lowest and second-lowest cost marketplace plans in the silver category — which are the basis for federal premium subsidies and chosen by 68 percent of enrollees — the average increase is nowhere near 35 to 55 percent.

The Kaiser Family Foundation found that the cost of a benchmark silver plan will be 4.4 percent more expensive on average across major cities in 13 states and Washington, D.C. (Again, that is a smaller annual increase than what had been occurring before Obamacare became law.)

According to Kaiser, enrollees in Minneapolis will see the biggest premium increase at 28.7 percent. On the other end of the spectrum, plans will actually decrease by 10.4 percent in Seattle. 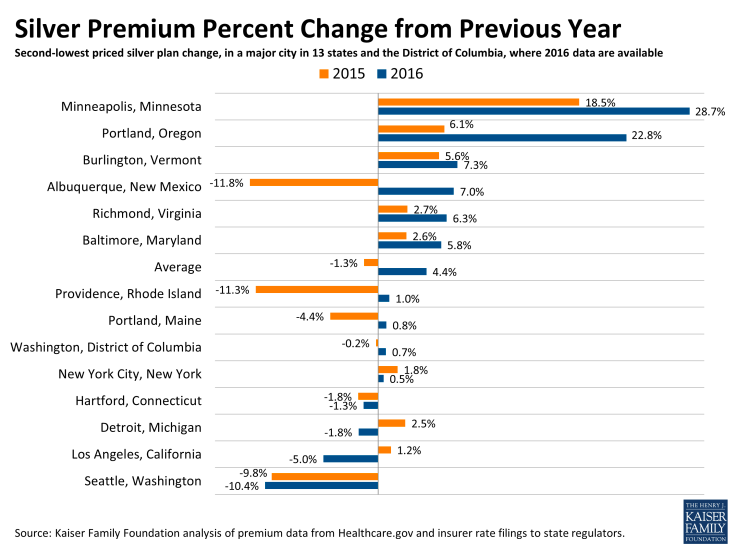 If we look at both finalized and requested rates across the board, Trump’s figure is still too high. ACASignups.net projects a national weighted average 12 to 13 percent increase across 49 states and Washington, D.C. (there’s no data for Wisconsin). That’s consistent with the Associated Press’ estimates, which project increases in the high single-digits to the low teens.

By Gaba’s estimates, just three states are hiking near the level Trump is claiming: Alaska, Hawaii and Minnesota.

"I don’t see any plausible way of the average rate hike being anywhere close to 35 percent, and certainly not any higher than that," Gaba said.

No such thing as typical

All the experts we spoke to warned us that there’s significant variation from plan to plan, from region to region, and from insuree to insuree. That’s why neither Trump’s claim nor averages tell the whole story.

The disparity in rate increases are more likely adjustments insurers are making, rather than evidence that Obamacare is a "disaster," as Trump says.

After all, 2016 is the first year that insurers are looking at actual claims data instead of "essentially guessing at what their costs were," said Levitt of the Kaiser Foundation. "Some insurers guessed better than others, which leads to variations in premium changes."

Enrollment figures are different from state to state, which affects the risk pool and the premium changes. Premium rate increases can also be unique to an individual’s circumstances, not necessarily reflective of a national average.

"A number of factors can result in a consumer’s premium differing from the average rate change, including changes in: age, tobacco status, geography, benefit design, family status, and subsidy eligibility," according to a brief by the American Academy of Actuaries.

To really get a sense of what the typical rate increase is, we not only have to wait for the final rates to come out but the enrollment figures as well.

"You need to have a weighted average so we’ll only know after the fact," Wilensky said.

In the meantime, experts recommend everyone check their own rates.

Some insurance plans in the federal exchange will see price hikes at the levels that Trump is suggesting. But he’s cherry-picking the high end of premium changes to come. Estimates for the national average are far below Trump’s figures, ranging from 4.4 percent to 13 percent.

Trump’s claim is partially accurate but takes things out of context. We rate it Half True.