Donald Trump
stated on April 4, 2016 in an interview with the New York Times:
China is "in the South China Sea and (building) a military fortress the likes of which perhaps the world has not seen."

Donald Trump warned of China’s military might in a recent interview with the New York Times.

We looked at Trump’s that the United States "rebuilt" China in a separate fact-check. But we were curious about Trump’s claim that China is now building a groundbreaking fortress in the South China Sea.

The Trump campaign didn’t get back to us about his claim, which is exaggerated. While China is expanding aggressively in the South China Sea, it is not constructing a floating Death Star by any means. 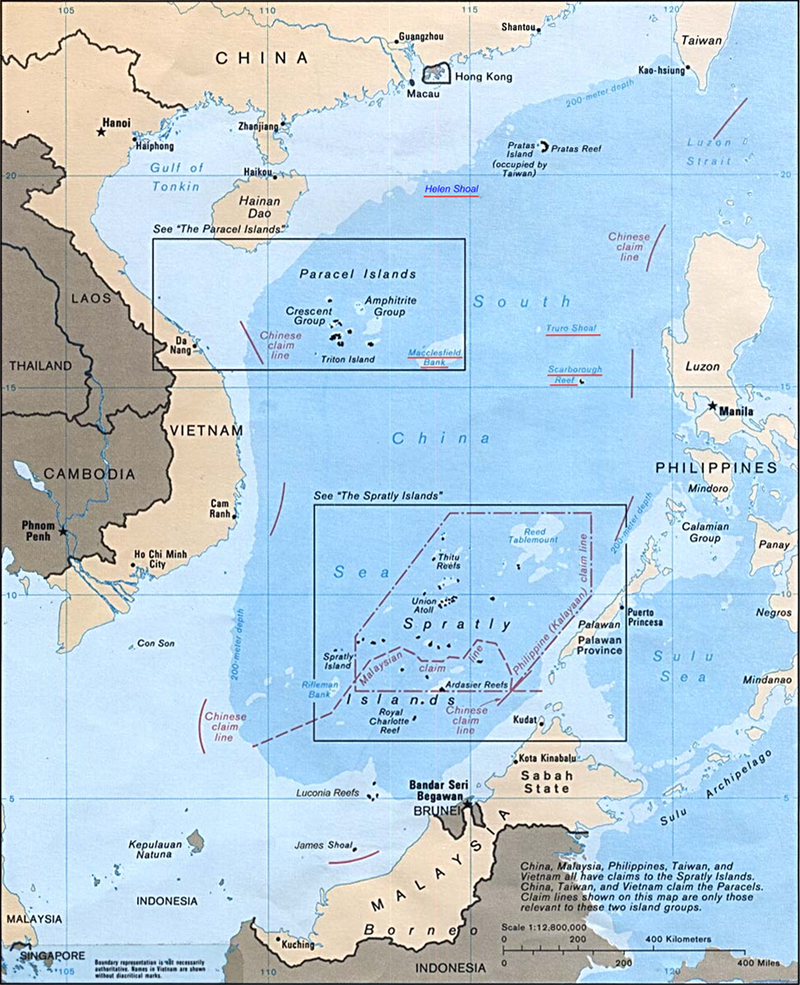 Take me to the South China Sea

Before we delve into the South China Sea, let’s go through some basics.

Several Asian nations have been fighting over hundreds of small islands, reefs, atolls and sandbanks in the South China Sea for centuries. Though largely uninhabitable, the area is a potential treasure trove of oil and gas. The waters are also home to some of the world’s busiest shipping lanes, where $5 trillion of trade passes through every year.

China and Taiwan both claim the good majority of the area and contend their sovereignty dates back, at the very latest, to Kublai Khan in 1293. Vietnam disputes this and says it’s ruled the key island chains, the Spratlys and the Paracels, since the 17th century. The Philippines’ claim for the Spratlys and the Scarborough Shoal is one of geographical proximity. Malaysia and Brunei, meanwhile, say parts of the waters fall within their United Nations-defined economic exclusion zones.

The United States, for its part, has no claim on the territories, but it has significant interests at stake. Assistant Defense Secretary David Shear, in congressional testimony last year, listed "peaceful resolution of disputes, freedom of navigation and overflight, and other internationally lawful uses of the sea related to these freedoms, unimpeded lawful commerce, respect for international law, and the maintenance of peace and stability."

Of particular concern to the United States is China’s ambitions to militarize the South China Sea and achieve "hegemony in East Asia," in the words of Navy Adm. Harry Harris Jr.

China retorted that it’s the United States that’s militarizing in the region and escalating tensions.

As a show of force, the Obama administration is sending Navy patrols to the region. According to the New York Times, Pentagon officials said these exercises were meant to convey the message that the "United States is the dominant military power in the region." In response, a spokesperson for Beijing’s defense ministry warned the United States to "be careful," according to the AFP.

Historical and legal arguments aside, the grab for the islands didn’t really begin until the 20th century, with military clashes and diplomatic stand-offs springing up every couple of years. And to assert their claims, all of the countries except Brunei have been building outposts and artificial islands in the South China Sea for decades. We’ll explain how an island can be artificial in a bit.

Vietnam and the Philippines were the most active in island-building in the early 2000s, and they, along with Taiwan, have stationed military forces on some outposts, according to Reuters. But in recent years, however, China has been the dominant player.

Since 2014, China has staked out about 2,000 acres in the South China Sea and built seven artificial islands and three airstrips in the Spratlys. This is "more land than all other claimants combined over the history of their claims," Shear told Congress.

Experts say Trump has a point that this reclamation and level of assertiveness is unprecedented.  Larry Wortzel, a member of the congressional United States-China Economic and Security Review Commission, noted that China’s buildup this time around is significantly improved in technical capacity, scope and modernity.

The artificial islands themselves, however, are not "the likes of which the world has never seen."

Floating but not exactly fortified

Artificial islands are made by building concrete platforms, docks, airtrips and other landmass structures onto reefs and sand cays in the Spratlys. For example, China created about 114,000 square meters (about the size of 20 football fields) of new land in the Spratlys by constructing a large supply platform on a reef, according to the Asia Maritime Transparency Initiative. 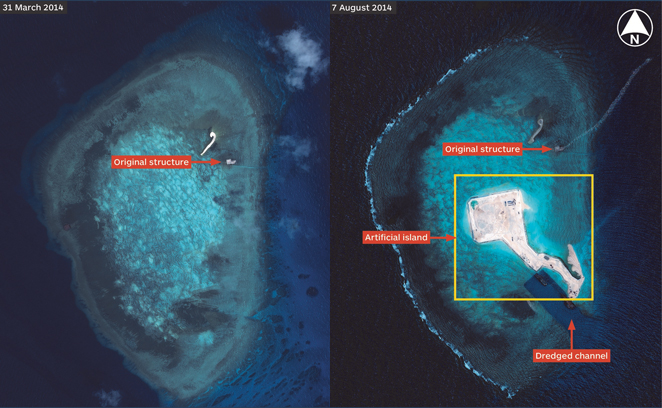 Though many in the media have taken to calling these artificial islands "fortresses" — a term that typically refers to a stronghold that can defend against attacks — they don’t quite live up to the name yet.

"It seems a bit premature to say that China is building a military fortress," said Bonnie Glaser, the director of the China Power Project at the Center for Strategic and International Studies.

For one, while Beijing will likely use the islands for military purposes, it’s been deliberately unclear about its intentions and hasn’t deployed any aircraft or missiles yet, Glaser told PolitiFact. Thus far, these outposts only have radars and dual-use equipment, according to Patrick Cronin, the senior director of the Asia-Pacific Security Program at the Center for a New American Security.

"A military fortress would be more obvious than China’s preferred exploitation of grey-zone situations and use of incremental tactics — salami-slicing incremental moves to improve China’s position," Cronin said.

For another, the military infrastructure China has built is far from unbreachable and, in fact, pretty vulnerable to attack.

"These facilities are quite limited and though they offer a headache to the region in peacetime, they would not be a major threat to U.S. or allied forces in a conflict," said Gregory Poling, the director of the Asia Maritime Transparency Initiative at the Center for Strategic and International Studies.

Trump may have been referring to the military base on Hainan Island or the surface-to-air missiles deployed on Woody Island in the Paracels. But the two are different from the recently constructed artificial islands. Hainan Island, which is roughly the size of Belgium, is not one of the contested territories. Woody Island, though contested and becoming increasingly fortified, has been under Chinese control since 1946.

Cronin noted that some analysts have speculated that China may be looking to form a triangle of bases to fortify its position — perhaps the closest thing to a "military fortress" — but "this is more of a long-term idea than a reality China can defend."

Trump said, China is "in the South China Sea and (building) a military fortress the likes of which perhaps the world has not seen."

China made large land grabs in the South China Sea and has constructed several artificial islands in the region. However, it's a stretch for Trump to say these outposts that could be used for military purposes amount to a fortress.

We rate Trump’s claim Half True.

Asia Maritime Transparency Initiative, "BEFORE AND AFTER: THE SOUTH CHINA SEA TRANSFORMED," March 18, 2015

Reuters, "Everything you need to know about the South China Sea conflict – in under five minutes," William Johnson, June 9, 2015

Email interview with Bonnie Glaser, the director of the China Power Project at the Center for Strategic and International Studies, March 30, 2016

Email interviews with Patrick Cronin, senior director of the Asia-Pacific Security Program at the Center for a New American Security, March 30 to April 1, 2016

Email interview with Gregory Poling, director of the Asia Maritime Transparency Initiative at the Center for Strategic and International Studies, March 30, 2016