Hillary Clinton
stated on April 11, 2016 in an event in Port Washington, N.Y.:
"The state that has the highest per capita number of … guns that end up committing crimes in New York come from Vermont."

During an April 11 appearance in Port Washington, N.Y., for what was billed as a "conversation on gun violence," Clinton took issue with Sanders’ characterization of his home state, Vermont, in the gun policy debate. Sanders has said that Vermonters have a more tolerant attitude toward guns than more urbanized states like New York, because of their state’s small, rural nature.

In Port Washington, Clinton said that doesn’t excuse Vermont from being part of the problem for cities grappling with the spread of out-of-state guns.

"So this is not, 'Oh, you know, I live in a rural state, we don't have any of these problems,' " she added. "This is, you know what, it's easy to cross borders, criminals, domestic abusers, traffickers, people who are mentally ill, they cross borders too and sometimes they do it to get the guns they use. This has to become a voting issue for those of us who want to save lives."

This talking point was several days in the making; PolitiFact attempted to fact-check a similar claim she reportedly made during a closed-door event on April 4. But we were unable to nail down the wording through a recording -- until Clinton offered the version in Port Washington a week later.

Our friends at the Washington Post Fact Checker gave Clinton’s claim Three Pinocchios out of a maximum of four -- not a very favorable score. But we’ll take a fresh look here.

When we asked the Clinton campaign for evidence, they pointed us to a report from the Bureau of Alcohol, Tobacco, Firearms and Explosives covering calendar year 2014. The report looks at firearm "tracing" data, an investigative and statistical tool used by the ATF to discern how a gun traveled from its point of origin to its ultimate destination, at which point the gun is often involved in the commission of a crime.

A chart in the report included Vermont in the top 15 "source states" for guns, with 55 guns from Vermont ending up in in New York. Here’s that chart: 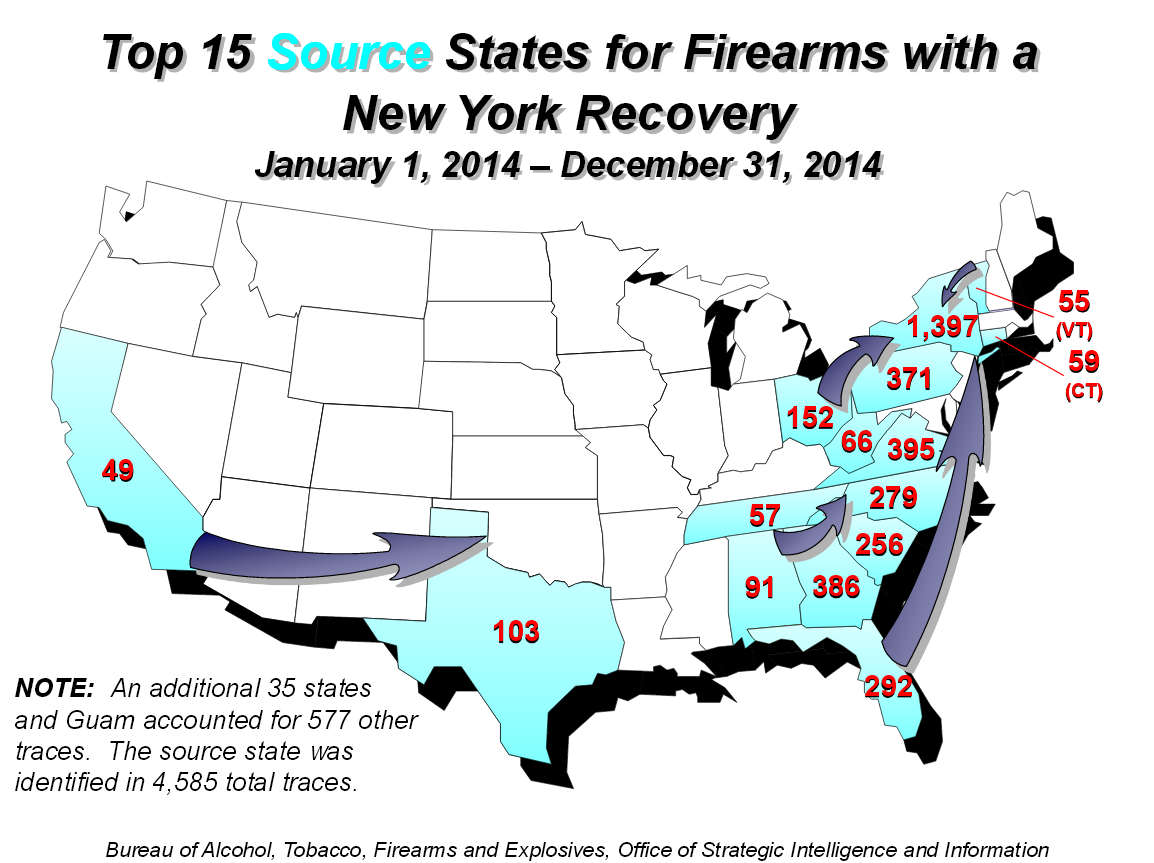 That’s actually one of the smallest raw numbers of any of the 15 highlighted states -- beyond New York itself, the biggest states in raw numbers of guns were Virginia, Georgia and Pennsylvania. These states, especially Virginia, are more commonly associated with the "Iron Pipeline" that some analysts have described in which guns flow up Interstate 95, from southern states with looser gun laws to northern states with stricter laws.

But it’s important to note that Clinton said "per capita." So we divided the per-state gun haul by the state’s population and confirmed that Vermont does indeed have the highest rate per capita, thanks to its tiny population. (Guns from elsewhere in New York ranked second, followed by South Carolina, Georgia and Virginia.)

So we have no quarrel with the accuracy of Clinton’s numbers. Instead, the dispute is about whether this per-capita number has any relevance to the gun-policy debate.

In a statement, the Clinton campaign said that the per-capita number is "critically important" because "it shows just how dangerous Vermont's laws are relative to other states. If Vermont had the population of California, it would source roughly 3,800 crime guns each year to New York -- far more than the top 15 total source states for New York crime guns combined."

However, the academic experts we checked with echoed the concerns from the Fact Checker article -- that the raw numbers matter much more than the per-capita numbers do.

John Roman, a senior fellow in the Justice Policy Center at the Urban Institute, told PolitiFact that "many guns used in violent events come from a very small number of dealers, usually unlicensed gun show folks or shady businesses. That's the problem with this denominator -- the size of the state's population doesn't matter, the number of bad dealers does."

The strongest support we found for using the per capita data came from Ted Alcorn, research director at Everytown for Gun Safety, an anti-gun-violence group. But even he was even-handed about the comparative usefulness of the two measures.

If you were a policymaker, Alcorn said, and you "had the ability to turn on off the spigot, of course you’d want to reduce the top-source states" as measured by raw numbers, he said. At the same time, he added, having an analytical tool along the lines of a per capita measurement is valuable for deciding where to pinpoint law enforcement resources.

"If you’re looking at the state level, and if you’re just concerned with the absolute numbers, you’ll only focus on the big states and never focus on the small states," he said.

That said, Alcorn said other types of measurements will often be more valuable than the state per-capita data Clinton is pointing to -- particularly if you can drill down to whether specific stores are seeing a disproportionately large share of the guns they sell end up in New York.

Experts we checked with offered a couple other concerns with Clinton’s statement:

• The ATF’s trace data is not random or comprehensive. In fact, this point was made in the very same report the Clinton campaign cited. It said: "Not all firearms used in crime are traced and not all firearms traced are used in crime. ... The firearms selected do not constitute a random sample and should not be considered representative of the larger universe of all firearms used by criminals, or any subset of that universe."

Jay Corzine, a sociologist at the University of Central Florida who studies gun issues, said this is an important caveat.

"The ATF tracing data is the best we have, but for a gun to show up in the data set, it has to be recovered by the police and the police have to make the decision to have the source of the gun traced," Corzine said. "Nobody really knows what the level of bias happens to be. It may be minimal or it may be substantial."

• Traced guns have not necessarily been trafficked. This is the case even though Clinton used the specific word "traffickers" in her comments.

"If Joe Gunowner moves from Vermont to New York, gets burglarized and loses a gun, and that gun is used later in crime, is recovered by police, and is traced by ATF, it will show up as a crime gun that originated in Vermont -- but it most definitely did not involve gun trafficking," said Gary Kleck, a professor of criminology and criminal justice at Florida State University.

It’s impossible to know how common this scenario is, but Kleck believes it’s substantial. The flow of guns across state borders is "a reflection of the very mobile character of the American population," he said.

• Geography matters. The question of geography cuts both ways when measuring the validity of Clinton’s claim. On the one hand, a small-population state with relatively loose gun laws that happens to share a long border with New York may carry added significance than a larger-population state with equally loose gun laws that’s located much further away.

On the other hand, it may be the case that the guns from Vermont are flowing into the neighboring areas of Upstate New York, rather than higher-crime areas around New York City that are more supportive of restrictive gun laws. (Corzine is one who thinks that’s quite possible.) We don’t know the answer to this question for sure, however, due to laws restricting the public release of data with greater detail.

Clinton said "the state that has the highest per capita number of … guns that end up committing crimes in New York come from Vermont."

Clinton’s specific statistical computation is accurate. But beyond the numbers, Clinton’s claim is misleading for a varied number of reasons. From a policy perspective, experts say raw numbers of gun flows are likely a better measure. And while the ATF data set is the best we have, Clinton’s bold comment glosses over some important caveats about the data, including whether the guns it captures are representative and whether they line up with "trafficking." These caveats call into question whether Vermont’s gun policies are having the effect Clinton suggests.

The statement is partially accurate but leaves out important details and context, so we rate it Half True.

Email interview with Jay Corzine, sociologist at the University of Central Florida, April 12, 2016