Donald Trump
stated on April 11, 2016 in a rally in Rome, N.Y.:
"My numbers are better right now than Ronald Reagan's numbers were with Jimmy Carter."

During a rally in Rome, N.Y., Republican presidential candidate Donald Trump cast himself as the inheritor of the mantle of Ronald Reagan -- at least in the way Reagan came from behind to win the 1980 presidential election.

"I haven’t even started on Hillary, and my numbers are better right now than Ronald Reagan's numbers were with Jimmy Carter," Trump said, at about the 17:50 mark. "Ronald Reagan had a 30 (percent) favorability and he was behind Jimmy Carter by so much everybody said, 'Oh, this is going to be a disaster.' "

Does Trump have a solid historical point? We looked at Trump’s numbers against Clinton rather than against her fellow Democrat Bernie Sanders because Sanders leads Trump by even larger margins than Clinton does. (Trump’s press staff did not respond to an inquiry for this article.)

Comparing Trump vs. Clinton to Reagan vs. Carter

We’ll start off by noting that the 1980 general election was different than the 2016 race -- at least so far -- because the earlier race had three major candidates. Carter, the incumbent president, faced Reagan, the Republican nominee, as well as John Anderson, running as an independent.

To focus as closely as we could on the Carter-Reagan race, we set aside Anderson’s vote share and looked instead at the shares taken by Carter and Reagan. Here’s a summary of polls, from the Roper Center for Public Opinion Research. We have included all polls we could find that were taken in March and April of 1980.

So, Carter did lead in seven of the eight polls, by an average of five percentage points.

What about the potential Trump-Clinton contest? Here are the polls released since March 1, 2016, that were publicly released by the time of Trump’s comment, according to realclearpolitics.com:

If you take the average of all these polls, Clinton leads Trump, 50 percent to 39 percent. That’s an 11-point advantage -- more than twice the size of Carter’s lead over Reagan in 1980 at the same point in the campaign.

So Trump’s numbers are not, contrary to his assertion, "better right now than Ronald Reagan's numbers were with Jimmy Carter." They are worse.

We should note that there was a period during the 1980 campaign when Carter actually was far ahead of Reagan in head-to-head polling, but it was brief and it was winding down -- if not gone entirely -- by this point in the campaign. After American hostages were taken in Iran in November 1979, Carter’s approval ratings initially spiked, in what historians sometimes call a "rally round the flag" effect.

This can be seen in Gallup’s job approval ratings below:

By January 1980, Carter’s job approval rating in the Gallup poll had risen to 58 percent. But by late March, it was back down again, to 39 percent. And that decline -- combined with the emergence of Anderson’s independent bid -- made the Carter-Reagan head-to-head contest much closer.

This trend can be seen in 1980 polling data from political scientists Christopher Wlezien and Robert S. Erikson: 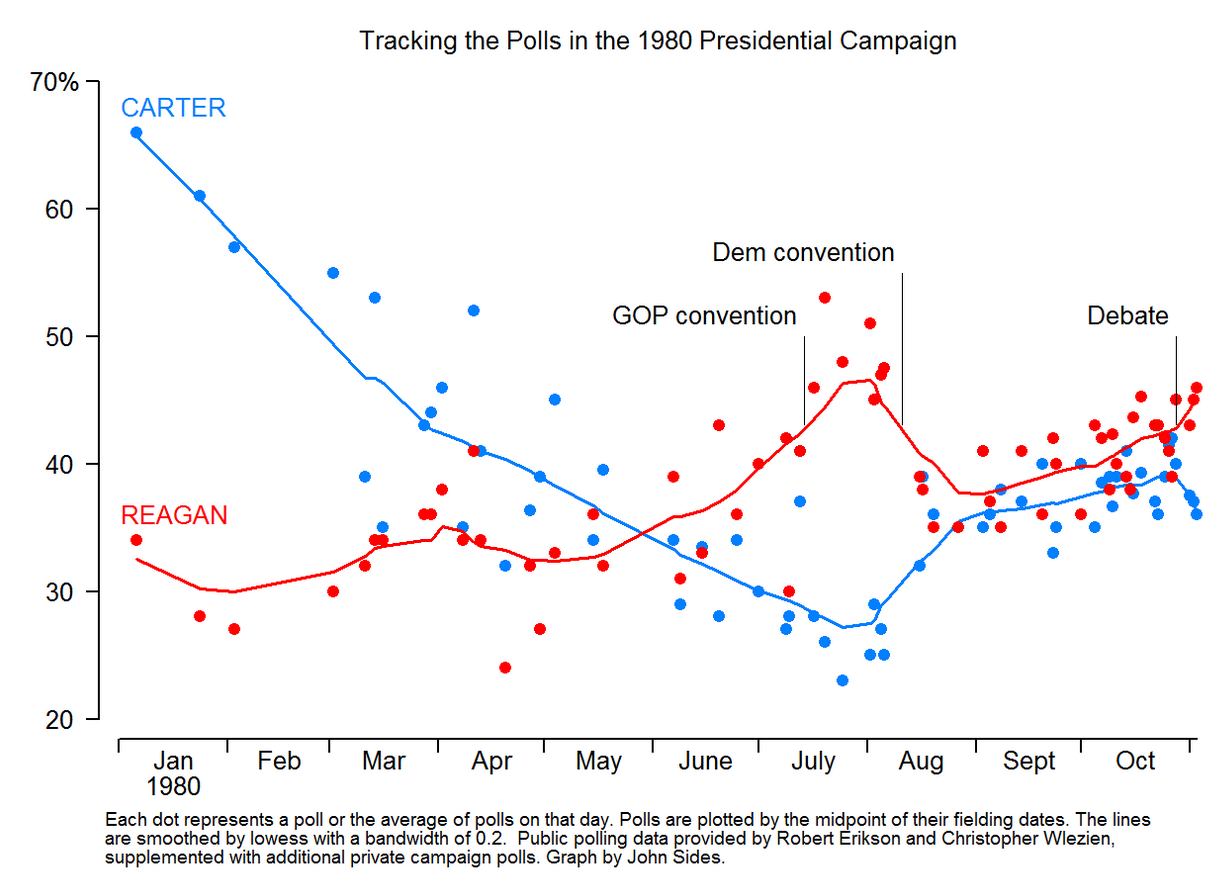 We didn’t find many questions on favorability in the Roper database, but one April 1980 poll from Cambridge Reports found Reagan at 39 percent favorable, 44 percent unfavorable. That’s five percentage points "under water" -- favorable minus unfavorable.

By contrast, Trump’s poll averages for favorability in 2015 and 2016 have -- at their best -- been 17 points under water. Currently, they are at 64 percent unfavorable, 30 percent favorable, according to HuffPost Pollster. That’s 34 points under water, far worse than Reagan’s in the spring of 1980. 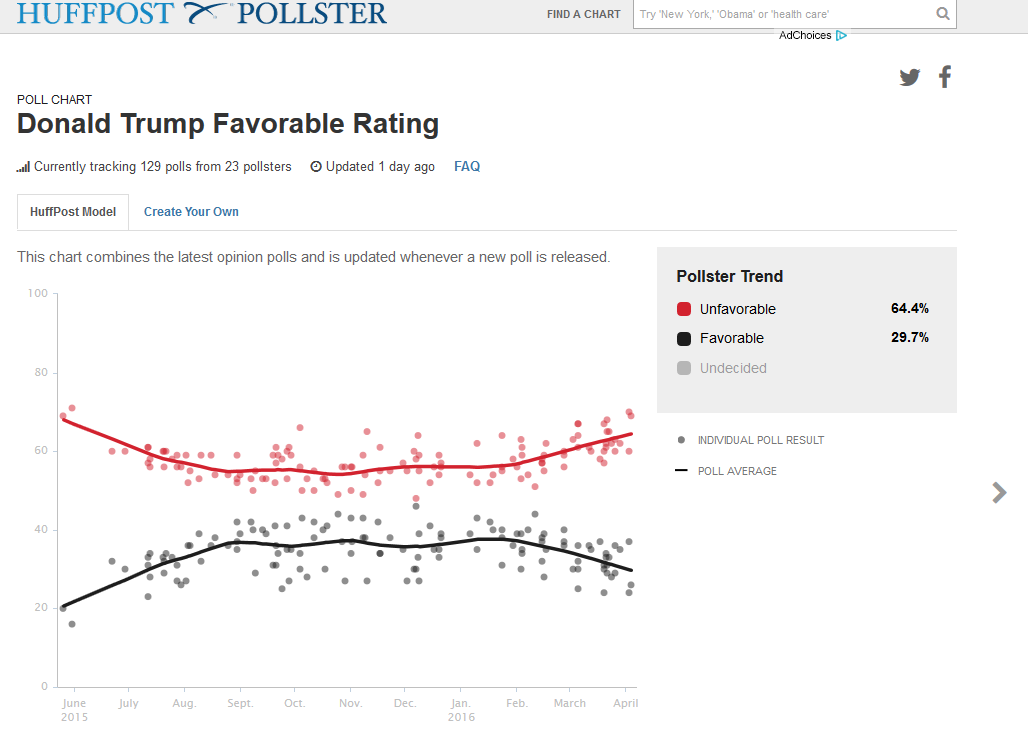 There are other indications that Reagan, despite being considered too conservative by many in 1980, was not as polarizing a figure then as Trump is today.

And a CBS News/New York Times poll in April 1980 asked, "Are there any candidates -- Carter, Reagan or Anderson -- you would refuse to vote for under any circumstances?" Only 13 percent said they would definitely shun Reagan.

Trump’s recent "never-vote-for" percentages are much higher. In two polls, a full 54 percent of those polled said they would definitely not vote for Trump -- an Associated Press/GfK poll in February 2016 and a Quinnipiac poll in March 2016.

Did people say Reagan’s candidacy would be ‘a disaster’?

Not in the national media coverage we found on Nexis, at least.

David Broder, the legendary political reporter with the Washington Post, wrote a piece on March 12, 1980, that was headlined, "Despite Primary Triumphs, Carter Could Be Vulnerable."

On April 7, Newsweek concluded its article this way: "The politics of discontent has already propelled Ronald Reagan nearly to the Republican nomination, enticed John Anderson to the brink of a third-line candidacy -- and now brought home the message that Jimmy Carter is once again in trouble."

And on May 8, 1980, the Post published an article headlined, "Poll Shows Reagan Now Likely Winner."

We asked Craig Shirley, who has written several books on Reagan, what he thought of of Trump’s comparison.

"There are just too many personal and ideological and cultural differences between Trump and Reagan and their times to draw anything resembling a parallel," Shirley said.

Trump said, "My numbers are better right now than Ronald Reagan's numbers were with Jimmy Carter. ... Ronald Reagan had a 30 (percent) favorability and he was behind Jimmy Carter by so much everybody said, 'Oh this is going to be a disaster.' "

Washington Post, "Is Carter Vulnerable? Despite Primary Triumphs, Carter Could Be Vulnerable," March 12, 1980 (via Nexis)

Email interview with Kathleen Weldon, director of member relations and communications at the Roper Center for Public Opinion Research, April 13, 2016

Email interview with Joshua T. Putnam, lecturer in political science at the University of Georgia, April 13, 2016

Email interview with Christopher Wlezien, political scientist at the University of Texas-Austin, April 13, 2016