Viral image
stated on August 5, 2016 in a viral image:
In the 2012 election, there were more votes cast than registered voters in St. Lucie County, and Palm Beach County had 141 percent turnout.

As Donald Trump muses about a "rigged" system that could cost him the presidential election, a debunked post detailing rampant voter fraud in 2012 is making a comeback.

The image, which provides a list of seven examples of voter fraud in Florida, Ohio and Pennsylvania, has been posted on several news outlets and forums (including Right Wing News, USA Carry and Conservative Stronghold) and has been shared thousands of times.

The image was also shared in January 2013 on email, according to Snopes and FactCheck.org. 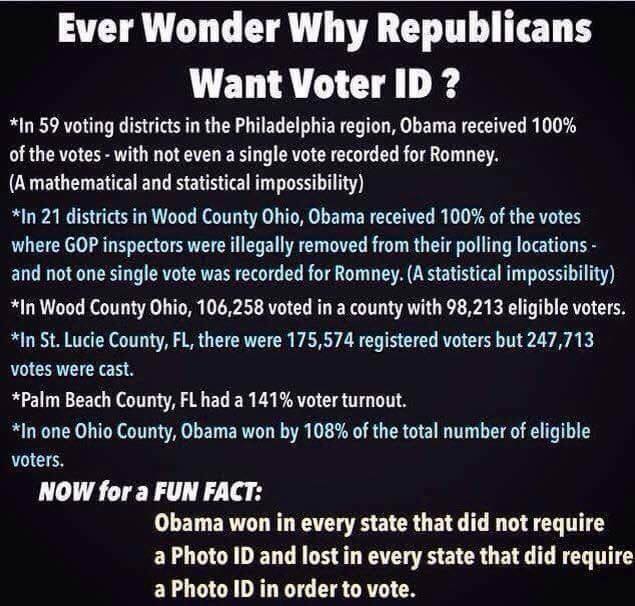 For this fact-check we’ll look at the claims about St. Lucie and Palm Beach counties in Florida.

Spoiler: Both are wrong.

One statistic represents a misunderstanding of how votes are cast in Florida, and another is completely made up.

Gertrude Walker, the county’s supervisor of elections, told us whoever made the image overlooked a disclaimer on the website at the time that explained how a two-page ballot differs from a vote. (It isn’t there anymore, but we can confirm it using the Wayback Machine.)

The disclaimer said: "Turnout percentages will show over 100% due to a two-page ballot. The tabulation system (GEMS) provides voter turnout as equal to the total cards cast in the election divided by the number of registered voters. Also note that some voters chose not to return by mail the second card containing the amendments."

The post moves farther down the state to Palm Beach County, where there was a "141% voter turnout" in 2012.

This claim is baseless, and there is no support for the 141 percent.

County data for the 2012 general election shows there were 605,268 votes cast out of 870,182 registered voters. So, Palm Beach County had almost 70 percent voter turnout.

The post makes two claims about voting in Florida counties during the 2012 presidential election.

The figures cited about St. Lucie County mix up the number of votes cast with the number of cards cast. The Palm Beach County claim uses an erroneous percentage, with no real source.

The post’s digs at Florida rate Pants on Fire.