It’s a rap battle straight out of the 15th century.

On one side of the ring is rapper B.o.B., the hip-hop star behind hits like "Airplanes."

On the other side is astrophysicist Neil deGrasse Tyson, known more for his truth-telling about the universe and climate change than spitting rhymes.

Their beef: B.o.B. says the earth is flat. Yes, really.

It all started going down Jan. 24 when B.o.B. tweeted a picture of himself at a high elevation, with two distant cities — but no discernable curve — on the horizon. 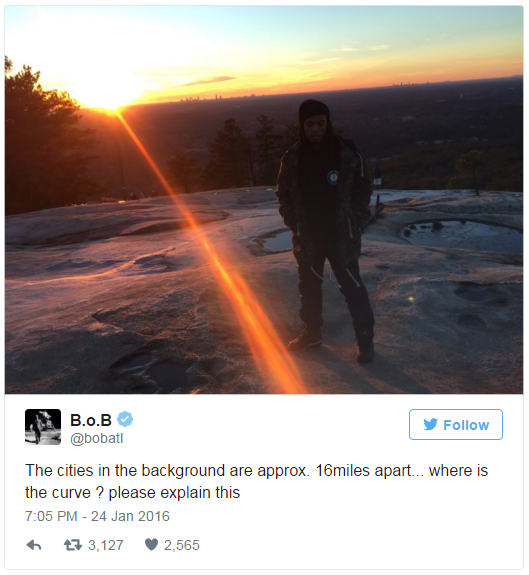 He then tweeted a series of images intended to raise questions about the fact that the Earth is round.

"I'm going up against the greatest liars in history," he wrote. "You've been tremendously deceived."

Step in, Tyson. The popular astrophysicist published a brief series of tweets to counter B.o.B., including the fact that the Earth’s curve does shield part of the Manhattan skyline from a distance, but the buildings are too tall to be fully obscured.

Tyson ended with: "Duude — to be clear: Being five centuries regressed in your reasoning doesn’t mean we all can’t still like your music."

The debate escalated when both B.o.B. and Tyson dropped rap tracks, Tyson’s rapped by his nephew, calling each other out (sample lyric: "I'm bringing facts to combat a silly theory because B.o.B has gotta know the planet is a sphere, G").

We won’t attempt to rap; we’d only embarrass ourselves. But we did ask a few astronomers what they would tell B.o.B. to convince him the Earth is round.

To be clear, this is a settled question. Since at least the ancient Greeks, people have had a hunch that the Earth is round, and it has been accepted as a universal truth for the past few centuries.

She said there’s an experiment B.o.B. and others could do. He could fly from the East Coast to Australia, going over Europe and Asia. Then he could fly back going over the Pacific Ocean and landing on the West Coast. If the Earth was flat, you would not be able to take both routes to and from a single destination.

We also know the Earth is round because of the curved shape of the Earth’s shadow on the moon during a lunar eclipse, said Raymond Jeanloz, an astronomy professor at the University of California Berkeley.

Further, the planet reacts to earthquakes in a very different way than it would if the Earth were a flat plane, Jeanloz said. Then there’s time zones, the fact that the sun appears at different angles at the same time in different locations.

And, while you have to be fairly high up with clear skies to see the Earth’s curve, you can observe the effects of curvature from the Earth’s surface by watching a large ship go over the horizon, disappearing from the bottom up.

Could there be a global conspiracy to hide the fact that the Earth is flat? No way, said David Trilling, an astronomy professor at Northern Arizona University. Millions of people and many countries, as well as numerous private corporations, would all have to be in on it, and they would somehow have to keep all the evidence concealed in the age of Buzzfeed and Wikileaks, he said.

"There is no chance that a secret that big could be concealed," he said. Rather, "the evidence for a round Earth is abundant and all around us."

Rapper B.o.B. said, "You've been tremendously deceived" by people who say the Earth is not flat.

The world’s scientists have gathered proof that the Earth is round for centuries. Now that we’re in an age where we can view the Earth from space, we can say with certainty that our planet is spherical. Even without a spaceship, we can see the effects of a round Earth by watching a ship on the horizon or looking out of an airplane window on a clear day. B.o.B.’s claim is Pants on Fire!

Correction: Ferdinand Magellan was Portuguese, not Spanish. An earlier version of this article was incorrect on this point.