Bernie Sanders
stated on February 11, 2016 in comments during the PBS Democratic debate:
"The African-American community lost half of their wealth as a result of the Wall Street collapse."

Sanders railed against Wall Street in his response to a question about race relations in the Feb. 11 Democratic debate in Milwaukee, Wis.

That claim stood out to us. Is it true that black wealth was slashed so dramatically as a result of the financial crisis?

Sanders understood correctly. His campaign referred us to a 2013 report from the National Association of Real Estate Brokers.

"According to the report, African-Americans have lost over half of their wealth since the beginning of the recession through falling homeownership rates and loss of jobs," it reads.

Of course, the two economic crises are intertwined, and both Pew reports note that the housing bubble and the recession that followed "took a far greater toll on the wealth of minorities than whites." Here’s a chart from the Pew Center that demonstrates this: 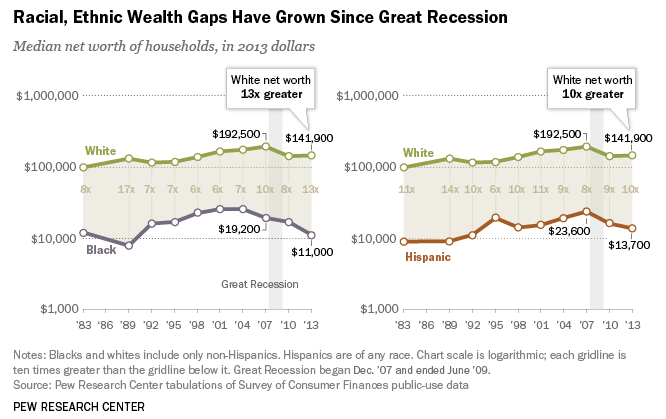 Census Bureau data corroborates, if not magnifies, this point: Black median net worth decreased 61 percent from 2005 to 2009. Whites, in contrast, lost 21 percent of their wealth.

Sanders said, "The African-American community lost half of their wealth as a result of the Wall Street collapse."

Because the two financial crises are inseparable, we won’t quibble with Sanders’ timeline. We rate his claim True.

CNNMoney, "Whites get wealthier, while Blacks and Hispanics lag further behind," Dec. 15, 2014

PolitiFact, "Brazile said 53 percent of black wealth has disappeared in the downturn," Aug. 24, 2011