Jonathan Stickland
stated on February 10, 2016 in a TV ad:
Scott Fisher "tried to expand Obamacare in Texas and even voted for an official resolution to force 1 million Texans into Obamacare."

A TV ad from state Rep. Jonathan Stickland of Bedford says his challenger in the March 2016 Republican primary, Scott Fisher, voted in favor of pushing a million Texans "into Obamacare."

That’s war talk for Republicans. And is it so?

The narrator of the ad, which was brought to our attention by Fisher consultant Craig Murphy, says Fisher, a Bedford church pastor, is running a negative campaign backed by liberals. Also, the narrator says, Fisher "tried to expand Obamacare in Texas and even voted for an official resolution to force 1 million Texans into Obamacare."

The image presented with that claim: 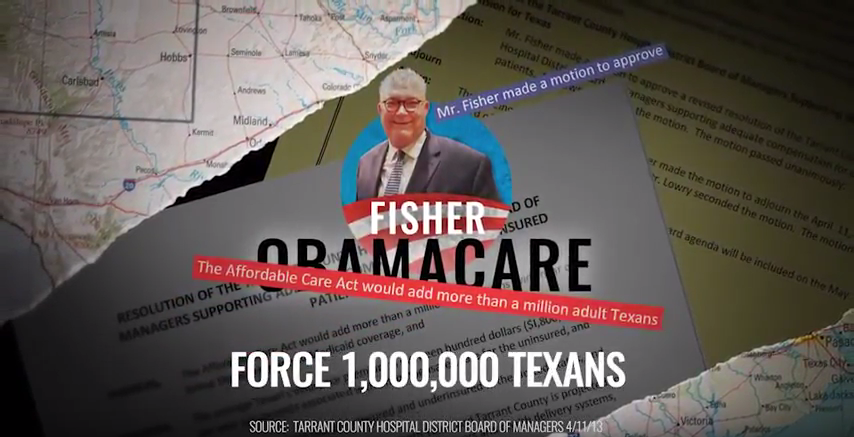 The Obamacare law, approved by Congress in 2010, requires most Americans to have health insurance and also permits states to widen access to Medicaid, the federal-state health insurance, with Uncle Sam covering the costs for three years and picking up most costs after that. In Texas, we concluded in 2015, around 1 million adults could have qualified for coverage if the state expanded access. Nobody would have been forced in; beneficiaries would have to sign up.

It’s an understatement to say expansion didn’t catch on in Texas. In 2012, Gov. Rick Perry rejected the option, calling the offer a brazen intrusion into state sovereignty. The next year, the Republican-led Legislature "shot down federal efforts to cover uninsured, low-income Texans by expanding access to Medicaid," a May 2013 Austin American-Statesman news story summed up.

We asked Stickland’s campaign consultant, Luke Macias, how Stickland concluded that Fisher voted to push a million Texans into Obamacare.

By email and phone, Macias maintained that documents emailed to us by Murphy demonstrate that as a member of a board, Fisher in 2013 propelled approval of a "pro-Obamacare" resolution that mentioned the Texas effect of Medicaid expansion and urged lawmakers to consider all options to cover health care for indigent Texans which, Macias suggested, would have included Medicaid expansion. Macias said the resolution’s Medicaid element added up to Fisher trying to force Texans into Obamacare.

The relevant documents concern the board of managers for the Tarrant County Hospital District, the county’s tax-supported health district. Fisher was a board member from May 2005 into January 2015, district spokeswoman J.R. Labbe told us by email.

In April 2013, the board was scheduled to consider a resolution calling for Texas legislators to expand Medicaid. But during the board’s April 11, 2013, meeting, according to meeting minutes, Fisher offered an alternate proposal. That resolution opened by stating Medicaid could insure more than a million low-income adults. But it closed by urging the Texas Legislature to find "sustainable" ways to fund the care of individuals lacking health coverage -- without mention of Medicaid or the Obamacare law. The substitute resolution passed unanimously, according to the minutes, which don’t show a vote on the original resolution urging Medicaid expansion.

Labbe put us in touch with the board chairman at the time, Fisher supporter Trent Petty, who said by phone he didn’t advocate the original resolution once it was offered for the agenda by district staff. Moreover, he said, "our board never voted for the resolution to expand Medicaid." Petty suggested we ask Robert Earley, the district’s president and CEO, how the resolution landed on the agenda. By phone, Earley said he couldn’t immediately recall; he speculated an association circulated the proposal to hospitals and other health care entities.

Petty told us that at the critical 2013 meeting, board members adopted the call to support "uncompensated care" instead of the Medicaid expansion resolution after discussion and agreement among members not to support expansion. Petty said: "Our board was not comfortable with Medicaid expansion. That substituted language was necessary because we didn’t want... to simply be silent about uncompensated care being addressed in some form or fashion by the state."

Instagram posts
stated on May 16, 2021 in an Instagram post
The Moderna vaccine contains an ingredient that is “for research use only, not meant for human or veterinary use.”

Labbe confirmed that board meetings weren’t recorded, leaving us no audio or video record to review.

Let’s peek at the resolutions.

The original -- unadopted -- resolution notes the U.S. Supreme Court had ruled it optional for each state to expand Medicaid in accord with the Affordable Care Act, known as the Obamacare law, and also says expansion would qualify more than a million Texas adults in poverty for Medicaid. It closes: "Now, therefore, be it resolved that: Tarrant County Hospital District Board of Managers respectfully calls on the Texas Legislature to seek all possible options for an efficient and effective Medicaid expansion."

The adopted resolution opens by mentioning the Texas effect of Medicaid expansion, stating: "Whereas, the Affordable Care Act would add more than a million adult Texans living near or below the poverty line to Medicaid coverage." It goes on to (inaccurately) attribute premium increases to increased costs of providing care to uninsured individuals and to say Texas has the highest rate of uninsured (which we confirmed in July 2015) and that the estimated number of uninsured served by the district was projected to increase, burdening taxpayers and "health delivery systems." Finally, the resolution asks state lawmakers to "seek all possible options to adequately fund uncompensated and uninsured care for indigent Texans that is feasible and sustainable."

We sought Fisher’s recollections. By phone, he noted that at the time of the board moves, he was Perry’s appointed chairman of the Texas Juvenile Justice Department, which is responsible for housing and rehabilitating juvenile offenders. Significantly too, Fisher said, Perry had reiterated his opposition to expanding Medicaid 10 days before the board meeting. The governor said April 1, 2013: "Texas will not be held hostage by the Obama administration's attempt to force us into the fool's errand of adding more than a million Texans to a broken system."

Fisher said he entered the meeting believing the board shouldn’t take a pro-expansion position, which would be "going totally opposite the recent statement of our governor."

We asked Fisher why the adopted resolution opens by saying the Affordable Care Act would add more than a million impoverished adult Texans to Medicaid. He replied: "Unsustainability. Those were statements that were made that showed the unsustainability, ‘the fool’s errand’ of expanding Medicaid coverage." Murphy elaborated by email: "The Whereas  statements" in the resolution "were meant, as in every resolution, as a statement of the current situation. The situation was bad."

"We stripped out any call for Medicaid expansion," Fisher summed up.

Stickland says Fisher "tried to expand Obamacare in Texas and even voted for an official resolution to force 1 million Texans into Obamacare."

At best, this claim misinterprets Fisher’s motion for the hospital district board to approve a resolution asking lawmakers to fund indigent health care. The adopted proposal urges consideration of all possible sustainable options. However, it doesn't call for forcing Texans into Obamacare.

We find this claim incorrect and ridiculous. Pants on Fire!