Barack Obama
stated on January 12, 2016 in his State of the Union speech:
"Our businesses have created jobs every single month since (Obamacare) became law."

President Barack Obama touted the success of Obamacare during his final State of the Union address.

He said the Affordable Care Act has led to nearly 18 million more people gaining health insurance and has helped to slow health care cost inflation. He added that the law didn’t destroy the job market, despite pessimistic predictions from critics.

"Our businesses have created jobs every single month since it became law," Obama said on Capitol Hill on Jan. 12, 2016.

We hadn’t heard that particular Obamacare talking point before, so we decided to take a look.

Because Obama referred specifically to "our businesses," we looked at private-sector employment data from the Bureau of Labor Statistics starting in March 2010, when Obama signed the Affordable Care Act.

Of the 70 months since, Obama is correct that every single one has seen positive job growth. That’s a record for uninterrupted job growth, according to our friends at the Washington Post Fact Checker.

This graph from BLS shows monthly change in private-sector job growth (in thousands) since the start of 2010: 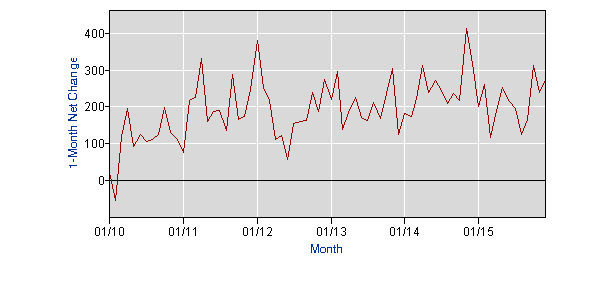 From early 2010 on, the data is above the zero line, showing positive job growth.

The fact that the country has gained jobs despite the health care law also might not assuage critics’ argument that job growth, and other aspects of the economy, would have been stronger absent the law.

For example, in a January 2015 fact-check, we found that the law might have caused many thousands of employees to have their hours cut from full-time to part-time.

But independent studies haven’t backed up claims that the law would end up reducing employment. In 2011, we rated a claim from former Rep. Eric Cantor, R-Va., that Obamacare is "job killing" False.

The private sector has seen job growth every single month since Obama signed the Affordable Care Act in March 2010.

There’s room for argument over what the growth would have looked like absent the health care law, but Obama’s statistic is on target. We rate this claim True.

Washington Post, "Obama’s claim that businesses are in the ‘longest uninterrupted stretch of job creation’," Sept. 15, 2014