To address racial tensions in the United States, the federal government should invest in law enforcement, said Sen. Cory Booker, D-N.J., on NBC’s Meet the Press July 10. But it has to be the right kind of investment.

President Richard Nixon launched the war on drugs in the early 1970s, and about 10 years later President Ronald Reagan strengthened the effort. We decided to look into Booker’s claim that these stricter drug policies led to a 500 percent increase in incarceration.

We found that the number of people incarcerated for drug-related offenses has increased dramatically in the past 40 years, as has the overall incarcerated population. But it’s hard to prove a causal relationship.

A spokesman said Booker’s statistic comes from the Sentencing Project, a criminal justice reform advocacy organization. It says the current incarcerated population is 2.2 million — including federal prisons, state prisons and local jails — which is a 500 percent growth over the past 40 years.

Experts told us that the Sentencing Project’s statistics are credible. 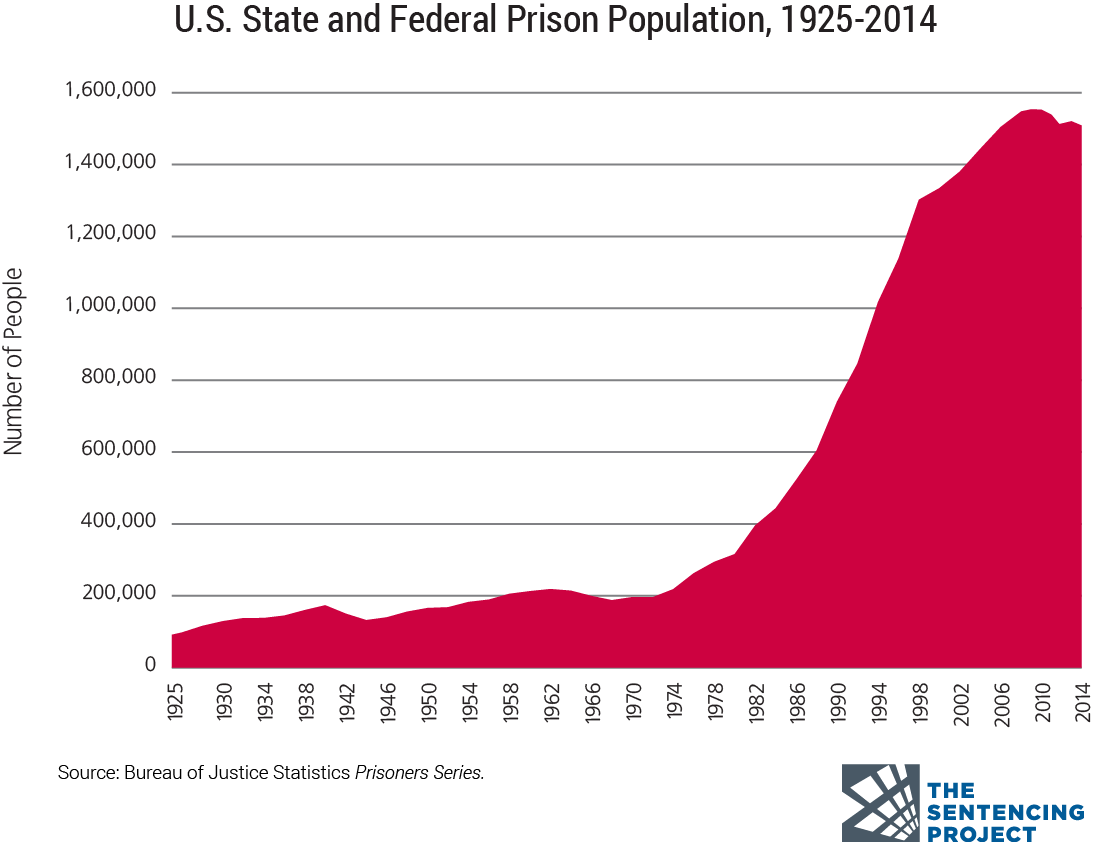 The state and federal prison population remained fairly stable through the early 1970s, until the war on drugs began. Since then, it has increased sharply every year, particularly when Reagan expanded the policy effort in the 1980s, until about 2010.

So it seems Booker has his numbers right, but how much of this increase is a direct result of the tougher drug laws? The effort resulted in the Drug Enforcement Administration's establishment, as well as policies such as mandatory minimum sentences for drug crimes and new asset forfeiture rules.

It’s hard to say exactly how much of the increase can be attributed to these policies because it’s difficult to isolate the impact to any one cause, experts told us.

That being said, "a lot of people attribute the increase in incarceration to the war on drugs," said Nancy La Vigne, director of the Urban Institute’s Justice Policy Center. "While it's much more complicated than that, I suppose most would agree that it was the single biggest driver."

More people are admitted to prisons for drug crimes each year than either violent or property crimes, found Jonathan Rothwell, a senior economist at Gallup. So drug prosecution is a big part of the mass incarceration story, he said.

Rothwell told PolitiFact he thinks some of the increase would have happened regardless, but Booker is right to focus on the drug war.

Others see it differently. John F. Pfaff, a professor at Fordham Law School, has argued that the impact of the war on drugs is greatly exaggerated, finding that drug crime only accounts for about 20 percent of prison growth since 1980.

"In reality, a majority of prison growth has come from locking up violent offenders, and a large majority of those admitted to prison never serve time for a drug charge, at least not as their primary charge," he wrote last year.

But violent crime and seemingly unrelated factors that contributed to the rapid increase in prison population growth can actually be connected to the war on drugs, said Steven Duke, a professor at the Yale Law School. For example, if policies cause the cost of drugs to go up, users might be more prone to steal in order to afford drugs. And black markets can lead to more violent crime, like if a drug deal goes sour and results in a murder.

Effect on minorities and poor people

It is a well-established fact that minorities are overrepresented in the prison population. About 58 percent of all sentenced inmates in 2013 were black or hispanic, yet the two groups make up just about 30 percent of the total population.

Research also suggests that when black and white people engage in the same illegal activity and have the same criminal history, black people are more likely to be arrested, more likely to face tougher charges and more likely to receive longer sentences than whites.

The question of how poor people are represented in the prison population, particularly among those incarcerated for drug-related offenses, is a little more elusive. The best data about prisoners’ income before their arrest comes from a 2004 government survey.

This would indicate that the incarcerated population is disproportionately poor, but it does not shed light directly on the question of the war on drugs' impact on poorer populations.

Booker has his numbers right, looking at incarcerated population growth over the past 40 years. It’s hard to conclusively attribute the rapid rise to the war on drugs, but many experts believe that it is a major factor, if not the primary factor.

Minorities are disproportionately represented in the prison population, and some slightly dated research indicates poor people are, as well. Evidence seems to show that black people are more likely to be arrested for drug crime than white people, despite being equally likely to use and less likely to sell drugs.

Even though it’s hard to prove a direct causal effect, the evidence seems to back up Booker’s claim. Because of that additional context, we rate his claim Mostly True.