Donald Trump
stated on July 27, 2016 in a tweet:
"Not one American flag on the massive stage at the Democratic National Convention until people started complaining- then a small one. Pathetic."

Republican presidential nominee Donald Trump noticed something on the first day of the Democratic National Convention in Philadelphia.

"Not one American flag on the massive stage at the Democratic National Convention until people started complaining-then a small one. Pathetic," Trump tweeted July 27, 2016.

Trump said the Democrats caved and added flags after he and others noticed.

Well, there is some evidence to the fact.

Some people noticed the flag missing during the first day of the convention on July 25, 2016. The conservative Daily Caller wrote "No Visible American Flags Present At The Democrat Convention."

"The Daily Caller is at the Democratic National Convention Monday and it doesn’t look like there are any American flags. The stage is bland and grey, with no red, white or blue present. A thorough look at the crowd present also turns up no American flags," the website wrote.

Some went further, saying the flag actually was banned at the DNC. 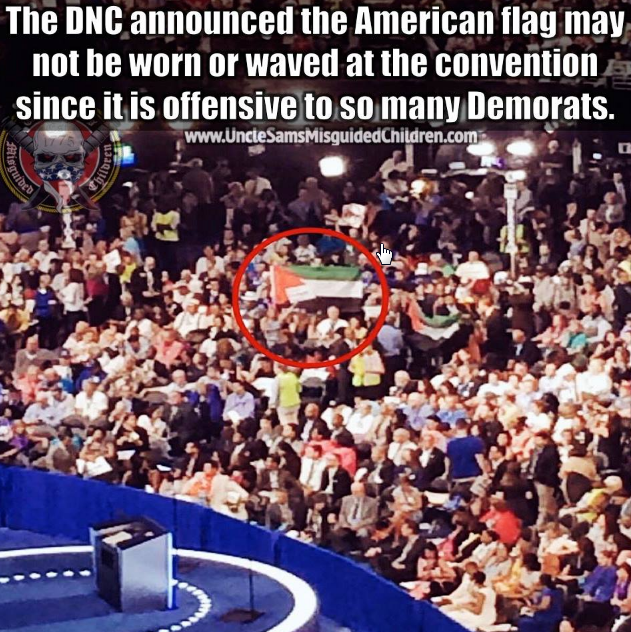 That particular viral image is bogus, there is no ban.

But what about Trump’s more-tempered claim that there was "not one American flag on the massive stage at the Democratic National Convention"?

We’re here at the DNC and have seen American flags at the Wells Fargo Center. The issue -- to the extent that Trump and others are making it an issue -- surrounds the stage that Democrats built in Philadelphia.

The stage includes huge video boards that serve as the main visual element for delegates in the arena and viewers on TV back at home.

One of our editors, Amy Hollyfield, snapped this photo before the convention opened July 25, 2016. It shows the set-up we described … and sizable virtual American flags on the video board. 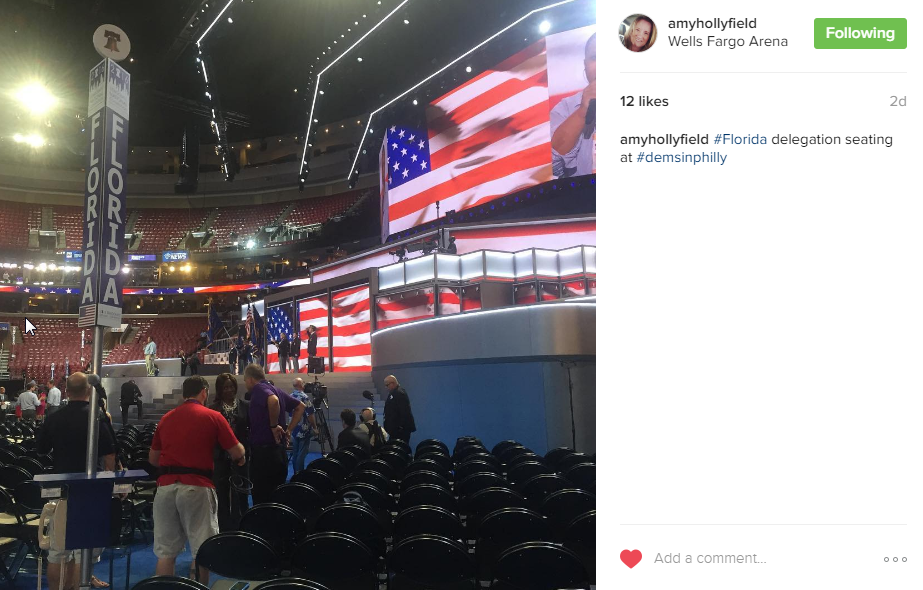 Hard to miss the flag there.

But where Trump and some people may have a point is that there did not appear to be physical flags on the stage during the first night of the convention.

A physical flag did appear during the Pledge of Allegiance and the National Anthem. You can see it, if you don’t believe us, at 31 minutes into this video of the convention’s proceedings.

But when the color guard left, so did the physical flag.

Trump also has a point that flags were added to the stage, starting with the second day of the convention July 26, 2016.

But it wasn’t just one, and they weren’t necessarily small.

Here’s a pre-flag photo from Bernie Sanders’ speech on the first night of the convention, taken by Stephen Crowley of the New York Times. 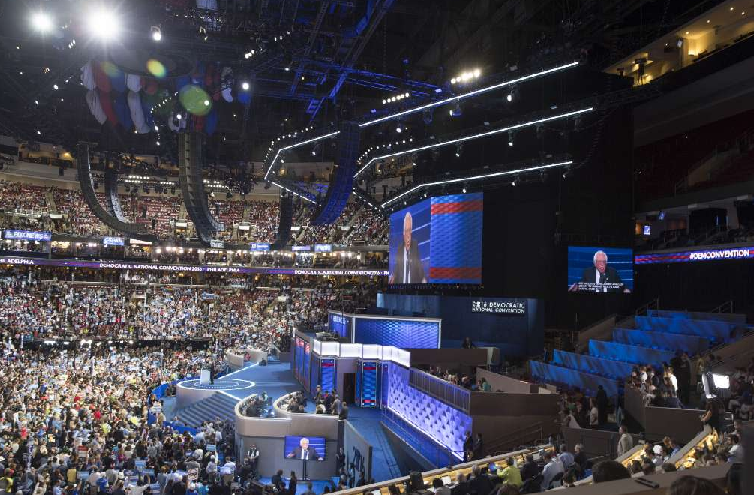 And here’s a photo from Ruth Fremson of the New York Times from the next night. 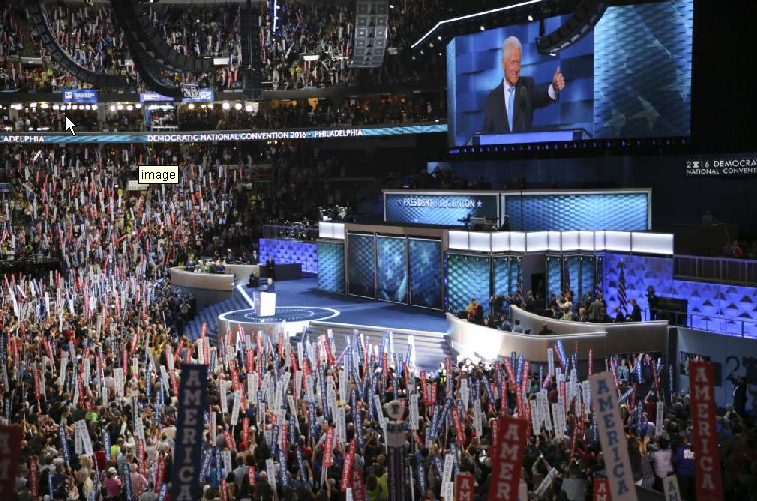 It may be hard to see, but the DNC did add a series of flags along the edge of the stage. You can see them in the shadows in the righthand side of the photo.

Here’s a better view. This photo was taken by Stephen Crowley, also of the New York Times. 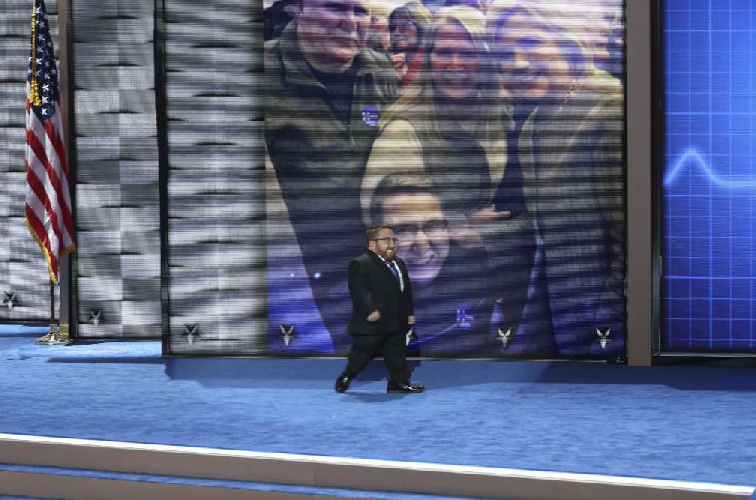 We asked DNC Communications Director Luis Miranda why flags were added to the stage Tuesday (and why they weren’t there Monday). If we hear back, we’ll let you know. We also reached out to the Trump campaign but did not hear back.

Trump said on Twitter, "Not one American flag on the massive stage at the Democratic National Convention until people started complaining-then a small one. Pathetic."

A huge video board prominently displayed the American flag during the first day. The proof is in the photos. And a physical flag made an appearance during the National Anthem.

But Trump has a point that physical flags (plural) appear to have been added to the stage for the second day of the Democratic National Convention, after some stories reported the lack of flags.

Trump is partially accurate. We rate the claim Half True.

Update: After we published, and thanks to a reader, we came across photos from the day before the convention, July 24, that showed flags on the wings of the stage. Here is a photo of the flags from Josh Haner of the New York Times: 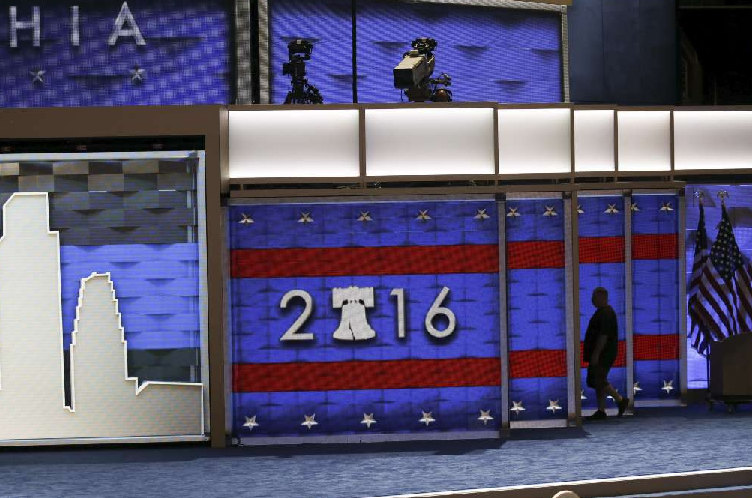 So the flags were in place before the convention started and removed for the first day ... but reappeared on July 26. We still haven't heard back from the DNC explaining what happened.

Various photographs, all sourced inside the story