Viral image
stated on June 1, 2016 in Facebook post by Liberals are Cool:
"Tuition-free public universities and colleges are just a pipe dream. False. They were both free up until the Vietnam War."

Is free tuition at public colleges and universities a lofty dream or modest proposal?

Liberals are Cool, a media organization, posted a meme on their Facebook page June 1. It reads, "Tuition-free public universities and colleges are just a pipe dream. False. They were both free up until the Vietnam War." 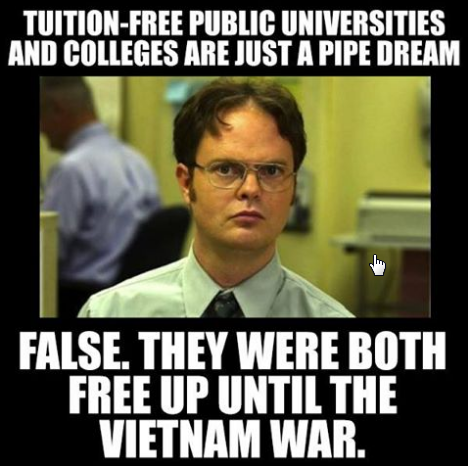 In February we looked at a similar claim made by Bernie Sanders, who said, "Making public colleges tuition-free, that exists in countries all over the world, used to exist in the United States."

After talking to experts we concluded that Sanders’ claim was Mostly True because at least nine nations offer free tuition, and some U.S. public colleges and universities offered free tuition. The caveat is that college tuition was up to each school or state to decide, meaning certain U.S. colleges charged tuition as early as the 1800s.

This new claim is broader when it comes to free tuition in the United States, so we wanted to take a fresh look.

Roger Geiger, a education professor at Penn State and author of The History of American Higher Education: Learning and Culture from the Founding to World War II, said the claim is "completely not true, except for California." Geiger also took issue with the idea that there were multiple tution-free universities.

"The only state that I am aware of that did not charge ‘tuition’ was California," Geiger said. "In 1960 it charged a basic fee of $60, plus incidental fees — still very cheap. ... Most other state universities charged tuition of roughly $200-300."

At its founding, the University of California offered free tuition to California residents, but charged a fee in 1921. By the 1970s both in-state and out-of-state students began to be charged tuition.

William G. Tierney, a professor at the University of Southern California Rossier School of Education, said public colleges used the word fees, not tuition, to describe costs associated with going to school.

"We didn’t call costs ‘tuition’ and instead used the word ‘fees’ to suggest that the cost was free but if you wanted something extra there was a ‘fee,’ " he said.

Geiger said some land-grant universities were tuition free in the 1800s, but that all ended after 1920 because universities needed more revenue due to inflation and the growing number of people attending colleges.

Tweets
stated on May 10, 2020 in a tweet
Barack Obama “is the first ex-president to ever speak against his successor.”

John Thelin, professor at the University of Kentucky, and author of A History of American Higher Education published by Johns Hopkins University Press, said that tuition prices in America have never been set on a nationwide basis, so higher education decisions are left up to the states. This means in each state a higher education official works with the state to come up with tuition policies.

"So, there is no statute or mechanism by which the federal government could set tuition nationwide, across state borders," he said.

There was no consistent pattern that public colleges and universities followed for charging tuition, and some institutions have changed their policy since their founding, Thelin said. For example, based on its charter, Rice University (formerly Rice Institute) was not allowed to charge tuition. Stanford was tuition-free at its founding up until the 1910s and Berea College, to this day, doesn’t charge tuition. Both Rice and Stanford now charge tuition.

The meme further suggests some change in policy necessitated or prompted by the Vietnam War.

Geiger says that is wrong. He said public funding for higher education remained strong until the 1970s, which was years after the Vietnam War ended. It wasn’t until the 1979-81 recession when tuition began to increase and state appropriations were lowered.

Thelin agreed with Geiger’s point that the Vietnam War had no cause-effect impact on tuition costs in America. He said a main influence on rising college costs was "stagflation"— a period of more than 15 years where inflation rates are higher than 10 percent and national economic productivity is low—in the 1970s.

"Some of this was due to OPEC and the unexpected, huge dollar and percentage increase in oil prices – which was very hard on colleges and other nonprofit organizations," Thelin said.

A widespread Internet post claims that public colleges and universities were tuition-free up until the Vietnam War.

This claim takes a potentially factual talking point and stretches it too far. Some public schools had essentially free tuition in the 1960s, but experts say they were largely isolated to California and that it was very much typical for public universities to charge tuition or fees at that point of time.

Any claim or suggestion that the Vietnam War had an impact on college costs is not borne out by the facts.

PolitiFact, "Was collge once free in the United States, as Bernie Sanders says?", Feb. 9, 2016