Hillary Clinton
stated on May 4, 2016 in an interview with CNN's Anderson Cooper:
"The market is making this decision. The market has driven down the cost of coal, so you have companies going bankrupt."

Some coal country voters see Hillary Clinton as a threat, someone who would install regulations that would hurt rather than help the struggling coal industry.

But Clinton, the Democratic frontrunner, told CNN’s Anderson Cooper that she thinks it's necessary to move away from fossil fuels to clean, renewable energy, and she wants to do what she can to help current coal mine workers make that transition.

"But the market is making this decision," she said May 4. "The market has driven down the cost of coal, so you have companies going bankrupt. So what I'm offering is a $30 billion plan to really revitalize coal country, to provide support for coal miners and their families, and I think that is the least the country owes these brave people."

Coal has historically been the country’s primary electricity generator. But several major coal companies have gone bankrupt in recent years, including Arch Coal, Alpha Natural Resources and Peabody Energy. We decided to dig into the question of how much of that change is due solely to market forces, rather than environmental regulation.

We talked to coal industry experts who told us that the primary forces working against coal are market-based, notably the growth of natural gas as a cleaner, cheaper alternative. But now that coal is vulnerable, environmental regulations may seal coal’s demise.

"Coal has always been able to absorb new regulations," said Robert Godby, a professor and expert in energy economics at the University of Wyoming. "But the impact natural gas has had since the fracking boom has been amazing to watch."

He added: "This would all still be happening regardless of regulations."

Natural gas is eating coal’s lunch, and the coal companies made a bad bet on Chinese demand.

Coal used to generate about 50 percent of electricity in the United States, but now it’s down to about 30 percent. Just in the past couple years, natural gas has begun to displace coal. (In this Energy Information Administration chart, the grey line represents coal, and the orange line represents natural gas.) 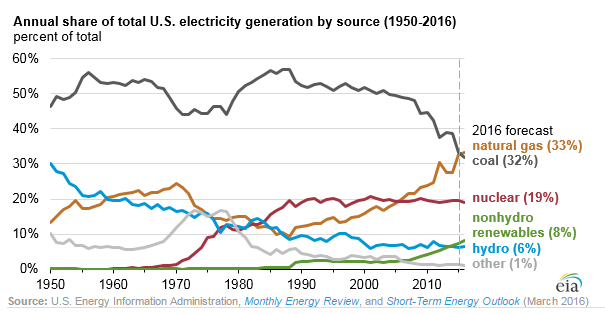 A recent boom in hydraulic fracturing (fracking) in the United States has dramatically increased the availability of natural gas. Natural gas prices are low, and it produces about half as much carbon. Consequently, demand for natural gas is going up, and demand for coal is going down, and fast.

He added that on top of all this, it’s getting harder to produce cheap coal in the Appalachia region because a century of mining has depleted supply, and so the costs of mining new coal are going up.

This is all a huge problem for coal, because electricity is about 90 percent of the coal market, said Andy Roberts, research director for global thermal coal markets at the consulting firm Wood Mackenzie. He said the trend is unlikely to reverse.

But it was a big, failed bet on the international coal market that ultimately pushed companies to a point where they couldn’t pay off their debts, forcing them to file for bankruptcy reorganization.

About five years ago, the big coal companies  — Arch, Alpha and Peabody — took out massive loans to invest in metallurgical coal, a type found in the Appalachia region. They thought fast-growing Asian countries, particularly China, would want the coal to facilitate economic development.

But China’s growth slowed, and the demand never materialized. The companies have been unable to pay back their debts on this project, and that’s what sent them into bankruptcy, Godby said.

Regulations may make electricity companies apprehensive about investing in coal down the line.

This is the best way to think about how environmental regulations affect coal: If you’re an electricity company considering building a new coal-powered plant or rehabilitating an outdated one, you’re already on the fence about whether that’s a good investment, because of the threat of natural gas. But then you remember you might have to face strict carbon emission limitations down the line, which convinces you to go with a natural gas plant instead of a coal plant.

Take President Barack Obama’s Clean Power Plan, a major initiative that would affect coal-powered plants by reducing carbon emissions. It isn’t in effect yet, and it faces court hurdles. Even so, the uncertainty of what kinds of carbon limitations coal plants will face, and the possibility that they could be significant, has already reduced coal plant investment, Roberts said.

"So, investment in coal plants is now basically nil," Roberts said. "And when the CPP begins in earnest in 2022, coal demand, already suffering, will more rapidly and inexorably decline."

Similarly, the 2015 Mercury and Air Toxics Standards is a federal regulation that has had a significant impact on the coal industry and contributed to coal-powered plant closures.

But it’s impossible to tell how much of the changes in the coal market can be attributed solely to the regulations, rather than the regulations plus the market forces.

Multiple experts we asked said that so far, it’s primarily been the market putting pressure on coal. But looking toward the future, as coal becomes more vulnerable and environmental rules get bigger, regulations may play a larger role.

"Yes, as Secretary Clinton notes, the market is sorting this out," Roberts said. "Competitive natural gas, the ‘market,’ does indeed have something to do with that. But so do the CPP and federal subsidies for renewable generation. The combination of all these elements has been toxic for coal companies and lethal for those with too much debt. In reality, the ‘market’ for coal is partially economic but increasingly regulatory."

Clinton said, "The market is making this decision. The market has driven down the cost of coal, so you have companies going bankrupt."

Economic forces on both the national and international markets are the main reason coal’s prominence in the American energy sector is now vulnerable, forcing coal-burning plant closures and several high-profile bankruptcies.

For a long time, coal has been impervious to government regulation. But more recently, regulations — a non-economic force — might be the straw that breaks the camel’s back, especially going forward now that coal is on shaky ground.

Clinton’s claim is missing this important context, so we rate it Mostly True.

Washington Post, "How super low natural gas prices are reshaping how we get our power," Oct. 28, 2016

Brookings, "Build a better future for coal workers and their communities," April 25, 2016