Hillary Clinton
stated on October 9, 2016 in the second presidential debate:
"We are now, for the first time ever, energy independent."

"Energy is under siege by the Obama administration," Trump said at the second presidential debate Oct. 9. "Under absolute siege. The EPA, Environmental Protection Agency, is killing these energy companies."

Democratic nominee Hillary Clinton replied that on the contrary, "We are now, for the first time ever, energy independent."

Clinton’s claim that the United States is energy independent raised some eyebrows, so we decided to see if it was accurate.

The United States still consumes about 11 percent more energy than it produces, so it has to import from other nations to meet that need.

This means "the U.S. is not energy independent," said Kenneth Medlock, senior director of the Center for Energy Studies at Rice University.

That said, imports have been trending down significantly since the mid 2000s. The EIA has projected that the United States will switch from a net importer of energy to a net exporter sometime between 2020 and 2030.

"The U.S. is not currently energy independent and, while it is moving toward energy independence, it is not expected to be so for about a decade," said Paul Holtberg, leader of the EIA’s Analysis Integration Team. 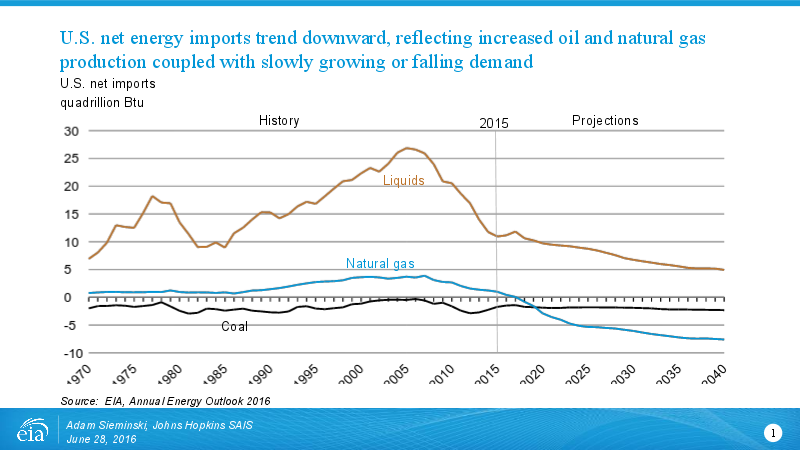 This shift is happening because of changes in both supply and demand. Domestic natural gas and oil production has skyrocketed since hydraulic fracturing, the extraction method known as fracking, came into regular use in the late 2000s. At the same time, Americans are using less energy as a result of growing efficiency.

Clinton said the United States is energy independent for the "first time ever." However, going by net imports vs. net exports, the United States is currently a larger net importer than it was from the 1950s (as far back as the EIA data goes) through the 1970s, and again in the mid 1980s. So current net import levels are not unprecedented. 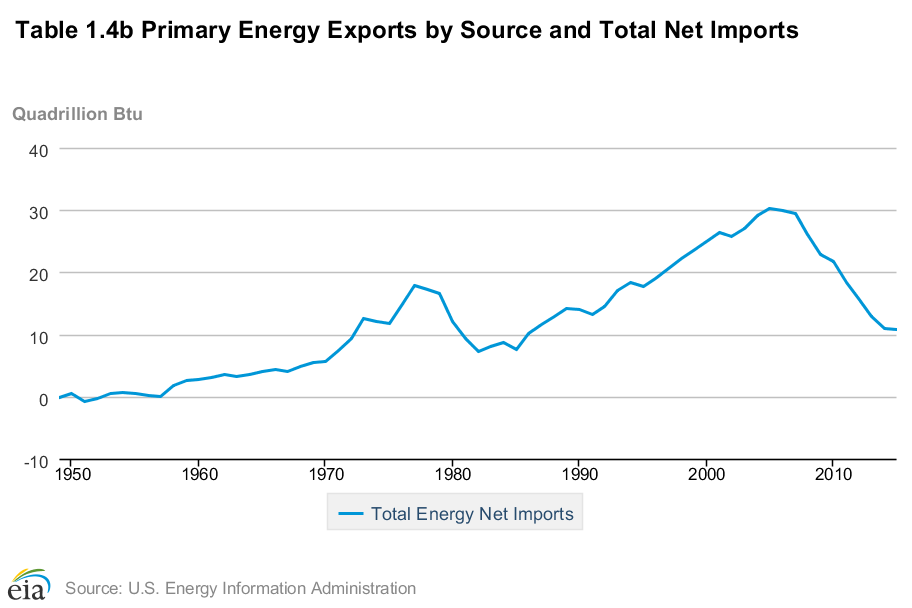 When people think of energy independence, they often think of oil because it’s the one source of energy that the United States has historically imported from potentially unstable areas. While the United States is essentially self-sufficient as it pertains to coal, natural gas and renewable energy sources, it still imports about 24 percent of its oil needs, even with the increase in fracking.

Even so, Marilyn Brown, a professor of sustainable systems at Georgia Institute of Technology, told PolitiFact that she thinks the United States is energy independent because it could meet its oil needs from a friendly country, like Mexico or Canada, if the oil market in one of its other top supplier countries became unstable.

North America as a whole is arguably energy independent, in that it produces all the energy it consumes on a net basis, several experts pointed out.

While Clinton’s claim that the United States is at present energy independent might not be fully correct numerically, the spirit of the claim is on target because the country is becoming less and less dependent on foreign sources, said global energy expert Amy Myers Jaffe, executive director for Energy and Sustainability at University of California, Davis.

Clinton said, "We are now, for the first time ever, energy independent."

However, this import-export gap is trending down. The EIA predicts the United States’ energy exports and imports will balance in the not-so-distant future. That said, imports and exports have been balanced in previous decades.

The United States is on track to energy independence, but it’s not there yet. Clinton's statement is not accurate and we rate it False.