Hillary Clinton
stated on October 9, 2016 in the second presidential debate:
Says Donald Trump’s tax plan gives the wealthy and corporations "more than the Bush tax cuts by at least a factor of two."

With a backdrop of leaked lewd comments and Bill Clinton’s alleged sexual misconduct, you may not necessarily remember what Donald Trump and Hillary Clinton said about tax policy in the deeply personal and nasty Oct. 9 presidential debate.

When Trump touted his proposal to deliver tax cuts for all, Clinton pointed out that his tax plan would help millionaires and billionaires like himself the most.

"His plan will give the wealthy and corporations the biggest tax cuts they’ve ever had, more than the Bush tax cuts by at least a factor of two," Clinton said. "Donald always takes care of Donald and people like Donald, and this would be a massive gift."

Is Clinton right that the wealthy would benefit from Trump’s tax plan twice as much as they did under the Bush tax cuts?

The Clinton campaign told us their data comes from an analysis by the conservative Tax Foundation and the left-leaning Center on Budget and Policy Priorities on after-tax incomes of the top 1 percent. We also looked at the share of tax relief received by the top 1 percent as a percentage of GDP.

The evidence shows Clinton is right.

The left-leaning Center on Budget and Policy Priorities estimated that the Bush cuts increased the after-tax income of the top 1 percent between 5.3 percent and 6.7 percent from 2004 to 2012 (tax rates for high-income earners were raised the following year).

Trump’s plan would increase after-tax incomes of the wealthy between 10.2 to 19.9 percent, according to the Tax Foundation, and deliver a tax cut equivalent to about 1.32 percent of GDP.

Second, Trump would also reduce the corporate income tax rate from 35 percent to 15 percent. He would also apply this rate to pass-through businesses, so-called because their profits currently "pass through" the business and instead are taxed as their owner's ordinary income. These would include partnerships like law firms and investor groups, sole proprietorships, limited liability corporations (LLCs) and corporations with less than 100 shareholders.

In its analysis of Trump’s tax plan, the Tax Foundation used both the 33 percent personal tax rate as well as the 15 percent pass-through business rate to assess the plan’s impact on individual taxpayers.

The Tax Foundation found that, depending on which rate you apply and whether you factor in growth, the top 1 percent of taxpayers would see their after-tax incomes increase by 10.2 to 19.9 percent. Here’s a table breaking down Trump’s proposed tax cuts by income group: 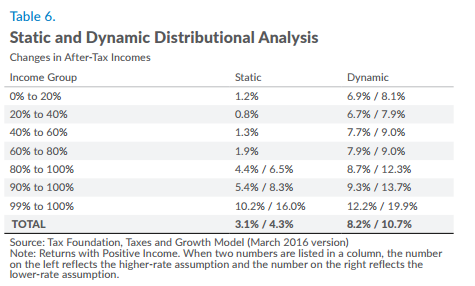 Similarly, the Tax Policy Center, which is affiliated with the Urban Institute, estimated that the top 1 percent would see a 13.5 percent gain in after-tax income.

Clinton may actually be understating the gains the top 1 percent would receive under Trump.

The Tax Foundation does not take into account one additional proposal that could affect the bottom line of many one percenters: eliminating the carried interest tax break.

Currently, profits from investment funds can be taxed at a personal capital gains tax rate of 23.9 percent rather than the top marginal income rate of 39.6 percent. Taxing these lucrative earnings as ordinary income would raise about $18 billion over 10 years.

While Trump’s plan calls for closing this loophole, it could also lower the tax rate since he’s proposing to tax pass-through businesses at a corporate tax rate of 15 percent — an 8.9 percentage point reduction from the current rate applied to hedge fund and private equity profits, the Center on Budget and Policy Priorities noted.

Clinton said Trump’s tax plan will give the wealthy "more than the Bush tax cuts by at least a factor of two."

After-tax incomes for the top 1 percent of taxpayers increased by 5.4 to 6.7 percent thanks to the Bush tax cuts. The same group would see incomes gains of 10.2 to 19.9 percent under the Trump tax plan, if not more.

Joint Economic Committee of the Congress of the United States, "THE MELLON AND KENNEDY TAX CUTS: A REVIEW AND ANALYSIS," June 18, 1982