The death of U.S. Ambassador Christopher Stevens came up as a topic during the second presidential debate Sunday night.

When moderator Anderson Cooper asked Donald Trump if tweeting about a sex tape between 3 and 5 a.m. reflected the discipline of a good leader, Trump denied using those words and suddenly veered onto the subject of the 2012 attack on the mission compound in Benghazi, Libya. Security was inadequate and Stevens died of smoke inhalation from a fire during an attack by insurgents.

Trump, apparently thinking that the drama unfolded at 3 a.m. in Washington, started referring to a famous Hillary Clinton commercial from her 2008 run for president, which argued that she was the best person for responding to a national emergency, as represented by a hypothetical 3 a.m. phone call to the White House.

Trump: "She said, 'Who is going to answer the call at 3 o'clock in the morning?' Guess what? She didn't answer  because ... Ambassador Stevens sent 600 requests for help."

It’s hard to overstate how much is wrong here.

The attack on the compound actually began at 9:42 p.m. in Libya, which was 3:42 p.m. in Washington. By 3 a.m. in Washington the following day, the attacks were over, and the people involved had either left Benghazi or were less than an hour from being flown out.

So for this fact-check, we're going to focus on whether Stevens made 600 requests for help.

Trump's cryptic comment might be heard as suggesting that Stevens made 600 "requests for help" during the attack. The investigations of Benghazi show that didn't happen. In fact, when we contacted the Trump campaign, they referred us to a graph that claimed something very different.

First, there's no debate that security at the mission was inadequate and that requests for improvements stalled or rejected.

Some security improvements were made the year of the attack, including "heightening the perimeter wall, installing concrete Jersey barriers, mounting safety grills on the safe area windows, and other minor improvements," according to a 2014 Senate Select Committee on Intelligence report. But while the CIA was making significant upgrades to its nearby annex, similar improvements were not being done at the Benghazi mission. The CIA annex had nine security officers, but only three officers were assigned to the mission complex.

A month before the attack, with the security situation deteriorating, Army Gen. Carter Ham, who was head of U.S. Africa Command, twice offered to give the U.S. embassy in Tripoli a special military security team. Stevens declined the offer. No reason was given, but it may have had to do with the State Department not wanting to aggravate the political instability in Libya with the presence of U.S. forces.

When we contacted the Trump campaign, spokesman Dan Kowalski cited this chart, which was displayed during hearings by the Republican-led House Select Committee on Benghazi. 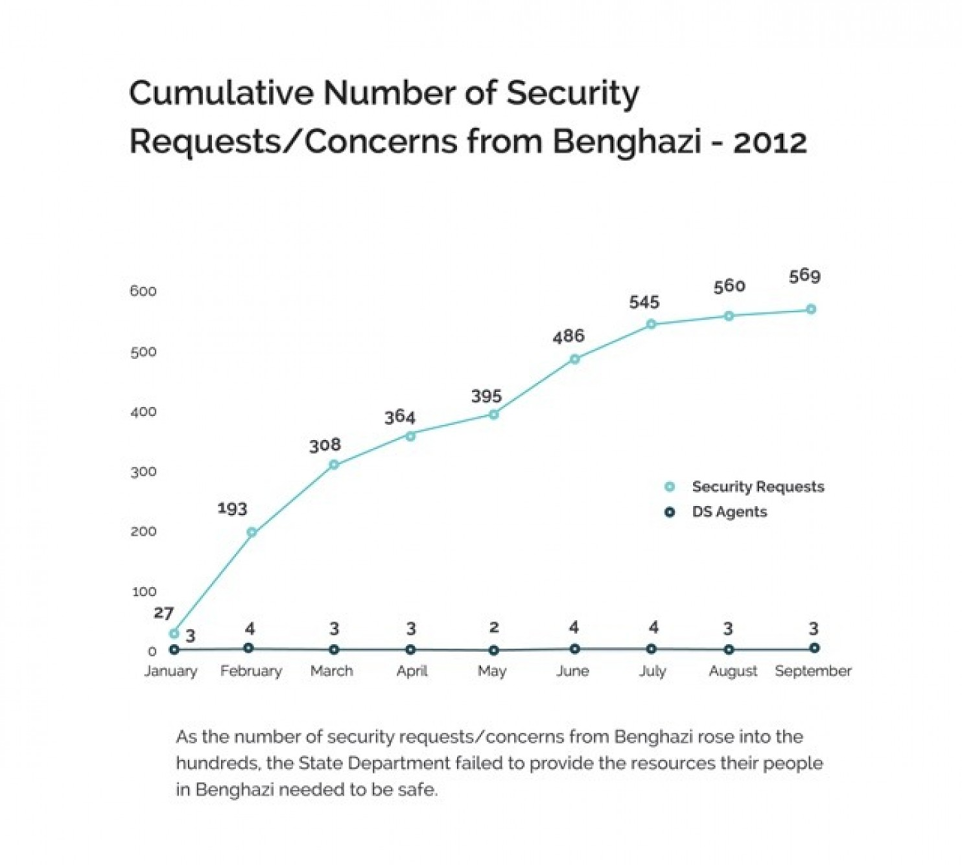 But there's no reference to this chart in the report itself, released months later.

Democrats on the committee, in their minority report, said that, "During our hearing with Secretary Clinton, Rep. Mike Pompeo (R-Kan) argued that the Select Committee had obtained ‘over 600 requests’ for security from Benghazi, but he refused to provide the evidence for his claim."

The minority report continues, "Democrats have been unable to successfully reconstruct a list of 600 requests for additional security, and have been able to identify fewer than 200 requests, many of which were granted."

A few things are worth noting right off the bat.

• Stevens wasn't sworn in as ambassador to Libya until May 2012. So even if every one of those requests/concerns originated from Stevens and went directly to Clinton, the highest number Trump could cite would be 205, not 600.

• The count is supposed to be the number of security requests or concerns from Benghazi to the State Department, not from Stevens to Clinton, as Trump said. This can get ambiguous because such correspondence is often sent under the name of the ambassador, even if he/she never saw it, to the secretary of state, even though in the vast majority of cases it's handled by lower-level people and the secretary never sees it.

As Clinton noted during her Jan. 23, 2013, testimony on the Benghazi attack, "1.43 million cables a year come to the State Department. They are all addressed to me. They do not all come to me. They are reported through the bureaucracy."

It's also not clear if all these requests were actually for Benghazi or were security-related requests involving the U.S. embassy in Tripoli as well.

Earlier this year, the Washington Post Fact Checker looked into the 600 number, which was being cited by Trump and others. He found duplication.

Once a request is made it can be followed by one or more statements of "concern" on the same topic, so there's a lot of overlap in the count.

The Post was given only a cursory look at the data used by the GOP staff to come up with their total, but he noted that one subject heading was repeated 17 times, suggesting that the same request was being repeatedly discussed. That alone may have inflated the total.

To properly check whether the same security-related requests were being reported under different subject headings, the committee would have to release the documents.

At the time, Kessler was reporting that the committee's final report "is supposed to list the documents that formed the basis of the 600 figure."

We contacted the committee twice and received no response. If we get additional information, we'll update this fact-check.

In any event, Kessler noted, "few if any" requests were likely from Stevens. He called Trump's comment "a whopper."

There certainly were many requests for security improvements at the mission. But Trump goes way over the line, citing a graph that includes a period when Stevens wasn't even the ambassador and doesn't differentiate between actual requests for improved security and follow-up correspondence.

The highest the number could be, according to that data, is 205 and there's no evidence that those "requests and concerns" — which may include duplicates — were even sent by Stevens.

We rate his statement Mostly False.

The Washington Post, "Hillary Clinton and the August 16 cable on Benghazi security," April 10, 2013 and "Everything that was said at the second Donald Trump vs. Hillary Clinton debate, highlighted," Oct. 9, 2016 and "600 'requests' from Benghazi for better security: What this statistic really means," Jan. 26, 2016