Hilary Rosen
stated on August 24, 2016 in "The Diane Rehm Show":
"The Clinton Foundation is a charity where President and Secretary Clinton and their daughter, they take no salary, they get no money from it, they take no personal benefit from it."

Some Republicans have presented the embattled Clinton Foundation as serving one purpose: "lining the pockets of Bill and Hillary Clinton," as GOP Chair Reince Priebus put it.

Responding to such criticisms, Democratic pundit Hilary Rosen said the Clintons "take no personal benefit" from the foundation. She also pointed out the legitimate charitable work the foundation carries out, such as its programs addressing AIDS in Africa and storm recovery in Haiti.

"The Clinton Foundation is a charity where President and Secretary Clinton and their daughter, they take no salary, they get no money from it, they take no personal benefit from it," Rosen said on NPR’s The Diane Rehm Show Aug. 24.

That’s a pretty wide gulf between the assertion that the foundation is just a front for the Clintons to make oodles of money and claims that they don’t get any personal benefit. It made us wonder: What exactly do the Clintons get out of the foundation?

The Clintons don’t take a salary from this work, and they don’t receive any other direct monetary benefit. Other Clinton Foundation leaders take home six-figure salaries, according to tax documents. 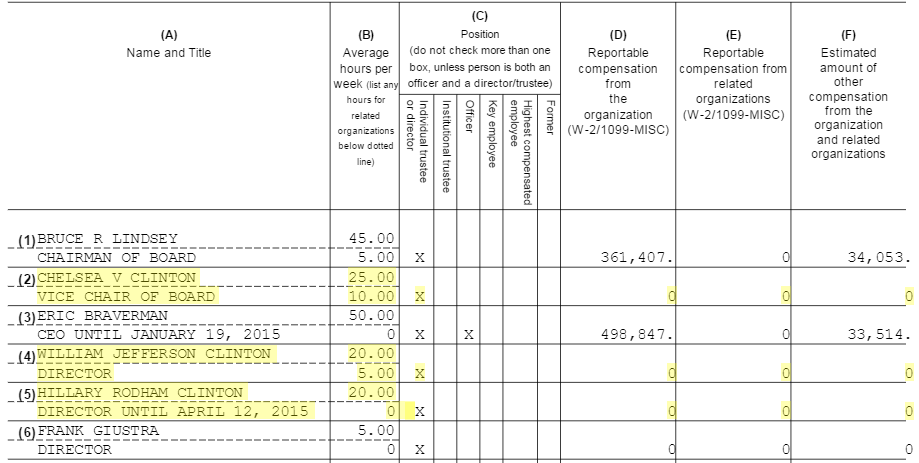 The Clinton Foundation is a public charity that, as we have reported, allocates about 80-90 percent of its expenditures to charitable programs, while the rest goes to fundraising and overhead.

So the Clintons don’t receive compensation from the foundation. However, you can make a case that they have received some indirect personal benefits.

This is not to say that any of these benefits are unethical or improper. Experts on nonprofit ethics told us these are pretty standard, and they haven’t seen anything reported about the Clinton Foundation that proves corruption.

Still, it’s worth reviewing the limited types of benefits that the Clintons do get.

The most obvious, outward-facing benefit for the Clintons is notoriety and media attention. The organization got off the ground in 2001, the year Bill Clinton left the White House. During the periods when he or Hillary were not in or running for office, the foundation kept the family in the public eye — and more often for good reasons, rather than scandalous ones (at least up until the past year or so, when Clinton launched her 2016 campaign and the foundation faced more intense scrutiny).

Throughout its existence, the Clinton Foundation has received attention for its work to make AIDS medication more accessible in Africa, efforts to combat climate change, establishing a business mentoring program, writing school food guidelines, and more. Every fall, Bill Clinton and his family receive a spate of press as the stars of the annual Clinton Global Initiative, a networking conference for wealthy philanthropic donors. Chelsea Clinton has embraced her role as a public face of the organization.

"It does continue to draw attention to the work they do as family and individuals throughout the world," said Ann Skeet, director of leadership ethics at Santa Clara University’s Markkula Center for Applied Ethics. "At a minimum, it is good public relations."

When the Internal Revenue Service evaluates charities applying for tax-exempt status, which the foundation has, it wants to ensure that the organization is set up to provide a public benefit rather than serve private financial desires, Skeet said. There’s nothing improper about the Clintons taking advantage of their public image in this role, as long as it goes toward that public benefit.

Pennsylvania Conservative Fund
stated on April 21, 2022 in an ad
Mehmet Oz “was a spokesman for a group who wanted to defund the police.”

Another big benefit: The Clintons’ role as high-dollar fundraisers for the foundation also enabled them to maintain relationships with wealthy and powerful individuals, including many who are also involved in the Democratic Party. There are some crossover big money donors, such as Fred Eychaner, Haim Saban and Daniel Abraham. (Republicans have been involved in the foundation, too; Mitt Romney spoke at the 2012 Clinton Global Initiative amid his run for the White House.)

The Clintons have also received some indirect monetary benefits from their charitable work, though none of this money came from the foundation’s coffers.

Bill Clinton wrote a book in 2007 called Giving, for which he received an advance of about $5 million, according to the New York Times. The book was about charitable work and so is, in part, based on his work with the Clinton Foundation.

Similarly, he has earned hundreds of thousands of dollars delivering numerous speeches where he talks about his Clinton Foundation work. For example, Samsung Electronics paid Bill Clinton $450,000 to deliver the keynote address at the 2013 Consumer Electronics Show, during which he talked about how technology has affected his work in the developing world through the Clinton Foundation. Samsung has also donated between $100,000 and $250,000 to the foundation.

Experts also pointed out that the Clintons have donated to their own charity, and those donations would be tax-deductible. Bill and Hillary Clinton have donated millions to their private philanthropy, the Clinton Family Foundation, which has in turn given between $5 million and $10 million to the Clinton Foundation. Chelsea Clinton herself has donated between $25,000 and $50,000.

And foundation tax documents stipulate that the Clintons, "due to extraordinary security and other requirements," often need to travel first class or via charter plane. A spokesperson said that in some cases, when the Clintons travel on foundation business, the foundation pays for their travel service directly. At least one campaign ad has been made lampooning Hillary Clinton’s travel on private jets.

Chicken or the egg?

This discussion raises a chicken-or-the-egg question: Do these benefits the Clintons receive really come from the foundation, or do they come from their already sizeable political capital?

Before the Clintons started their foundation, they were famous for being the country’s first family. Absent the foundation, it’s quite possible they could command equally sizeable speaking fees and book advances. They would have access to the same members of the global elite. They would have the ability and finances to donate to charitable causes. Buildings would bear their names. Hillary Clinton would still receive hefty donations supporting her presidential campaign.

In all likelihood, very little would change in the Clintons’ private lives if the foundation were to close, said Tony Proscio, a researcher at Duke University’s Center for Strategic Philanthropy and Civil Society and a consultant to foundations and large nonprofit organizations.

"It’s fair to wonder how much of a ‘benefit’ these things would be to Bill and Hillary Clinton, who are already at home in high society, more famous than almost anyone, and probably welcome to associate themselves with whatever good deeds they please," Proscio said. "Are those ‘benefits’ as valuable to the Clintons as they would be to someone else? It’s debatable."

On the flip side, he said the foundation likely would not be as successful nor as widely known if it didn’t have the Clintons’ name attached. He noted however, "There’s a glamour attached not only to the foundation but to the Clintons' participation in the foundation that seems a little self-serving."

The reason people start charities in their name and donate significant amounts of money often boils down to a desire to feel like they’re contributing to a cause they care about or to increase their standing in the community, Skeet said. These are, however abstract, a form of personal benefit.

"All donors to all organizations give for a reason you can tie back to personal benefit," she said.

Rosen said, "The Clinton Foundation is a charity where President and Secretary Clinton and their daughter, they take no salary, they get no money from it, they take no personal benefit from it."

Rosen’s claim is correct on its face. The Clintons do not take any sort of paycheck, bonus or fees from the Clinton Foundation.

It is possible the foundation has boosted the Clintons’ public image since Bill Clinton left office, and this has helped them command hefty speaker fees and book advances, and it’s also given them extra opportunities to mingle with the global elite. But they may have gotten these benefits even without the Clinton Foundation. Their celebrity primarily comes from their track record in politics.

Politifact Rating:
Mostly True
"The Clinton Foundation is a charity where President and Secretary Clinton and their daughter, they take no salary, they get no money from it, they take no personal benefit from it."
Hilary Rosen
Democratic pundit

Washington Post, "The inside story of how the Clintons built a $2 billion global empire," June 2, 2015

Chronicle of Philanthropy, "How to Understand the Clinton Foundation," June 8, 2015