Donald Trump
stated on September 12, 2016 in an interview on CNBC:
Heroin comes in the United States "from the southern border."

The rate of heroin-related overdoses has nearly quadrupled between 2002 and 2013, with more than 8,200 deaths that year, according to the Centers for Disease Control and Prevention. Appearing on CNBC, Trump argued that this too is tied to weak borders.

"Our youth is being poisoned. You go to places like New Hampshire, where it’s the No. 1 thing, heroin, and it comes from the southern border. And you go to Ohio, as an example, I was there two days ago, and the biggest complaint they have is what’s pouring into there," Trump said, before repeating his False claim that Hillary Clinton "is for open borders."

We’ve all heard of poppy fields blooming in Afghanistan, but is Trump right that heroin is entering the United States largely through the southern border?

Yes. Even though Southwest Asia supplies heroin to most of the rest of the world, nearly all of the heroin available in the United States comes from Mexico and South America.

"Mexico, and to a lesser extent, Colombia, dominate the U.S. heroin market, because of their proximity, established transportation and distribution infrastructure, and ability to satisfy US heroin demand," the U.S. Drug Enforcement Administration wrote in its National Drug Threat Assessment of 2015.

"Mexico continues as the primary supplier of heroin to the United States," the White House’s page on the international heroin market reads. "Estimated cultivation of opium poppy reached 10,500 hectares in 2012, with an estimated pure potential production of 26 metric tons."

Here’s a chart from the DEA report demonstrating the prevalence of heroin from the southern border: 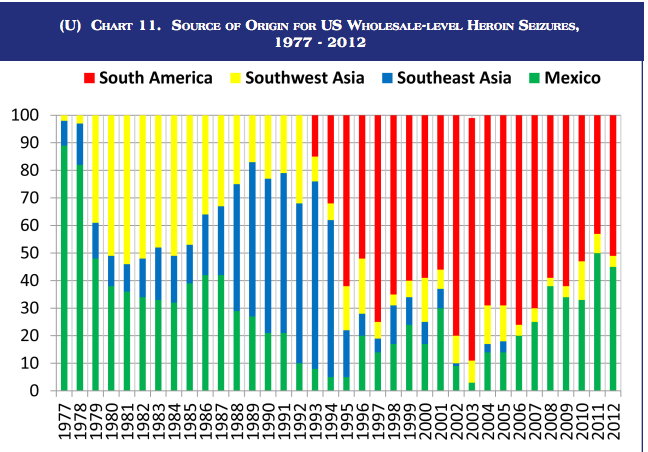 As you can see, South America and Mexico have been the sources for much of the heroin in U.S. markets for the past two decades.

This market share is also reflected in the amount of heroin seized at the border and the amount grown in Mexico.

In 2008, the total amount of heroin seized at the U.S.-Mexico border (about 560 kilograms) surpassed the amount seized from commercial airlines for the first time (about 400 kilograms). Border seizures nearly quadrupled from 2008 to 2015 (2,210 kilograms), according to data provided to us by Baer.

"The majority of the drugs in the U.S. market are trafficked across the Southwest Border from Mexico into the US. Southwest Border seizures conducted by U.S. Customs and Border Protection, while not the complete picture, provide insight into trafficking trends," he said.

Traffickers typically smuggle the drugs in through secret compartments in vehicles across the border (illegally and legally), transport them to stash houses in hub cities like Dallas, Los Angeles and Phoenix, and then distribute to the Midwest and East Coast.

Here’s a map from the Justice Department that shows how heroin moves through the United States: 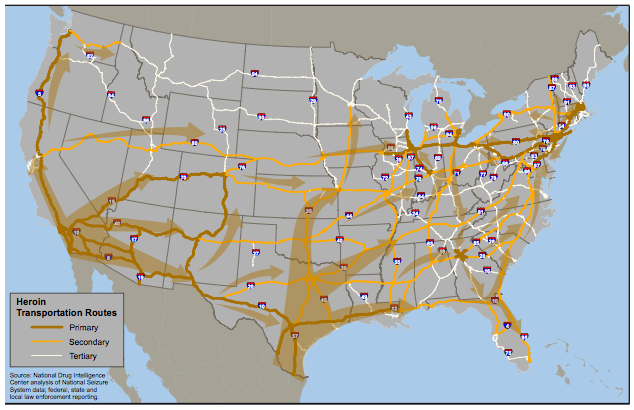 The vast majority of heroin in the United States comes from Mexico and South America.