USF Divest
stated on April 11, 2017 in a video on Facebook:
Says the University of South Florida invests in oil companies like BP, tobacco companies, weapons manufacturers and private prisons.

University of South Florida students, faculty and alumni are revamping their efforts to have more say in how the university invests its money.

A new video called "#HeyJudy" from the USF Divest coalition urges USF administrators to stop investing in a number of industries that they don’t support, such as private prison operators, tobacco companies, oil companies and weapons manufacturers.

A cool-talking student narrator (he’s "kind of a big deal") lays out the problem and calls on USF President Judy Genshaft to implement an ethical review process giving students and faculty some influence over where the money goes.

The video laces comments from a the narrator with asides from people who control the industry being called out.

"Here at the University of South Florida we invest in oil companies," the narrator says.

"Like BP, even though we screwed up your coastline," says a man dressed like an oil executive. "Ooo."

"Tobacco companies," the narrator says, adding to the list.

"USF hypocritically proudly tobacco free, yet, the school shares in tobacco’s plentiful profits," says a man with a cigar in tow.

"That is hypocritical," the narrator responds. "We also invest in weapons manufacturers."

"Anyone need a hellfire missile? 50 percent off," exclaims a man with a missile on his shoulder.

"No thank you," says the narrator. "And private prisons."

"Has anyone seen any black people?" asks a man in a suit. "We need to make our quota."

Divestment has been suggested many times at USF since 2013, either through student elections, student petitions or Student Government, often led by the student organization, Students for Justice in Palestine.

With the video buzzing on campus we wanted to check out if USF invests its money in oil companies, tobacco companies, weapons manufacturers and private prisons.

What’s going on with USF’s investments?

When we reached out to USF Divest about this claim, they said their evidence stems from a 2013 document detailing how the USF Foundation invests its share of USF’s endowment money.

The foundation is classified under Florida laws as a 501(c)(3) nonprofit, meaning some relevant records are shielded from disclosure.

This makes it hard to pinpoint the exact companies the foundation invests its money. Here’s what we know.

The committee that oversees the university’s endowment does not select individual stocks or companies for the endowment to invest in; rather, it hires investment managers who decide what funds to invest.

Viral image
stated on August 28, 2021 in a Facebook post
Says the Tampa Bay Buccaneers owner paid for a Wall Street Journal ad critical of the president.

Adam Freeman, the communications director for USF, said the video asserts that the USF Foundation made a decision to invest in certain companies, which is not the case.

"The university does not invest in individual companies," he said. "A diversified portfolio has exposure to a wide array of asset classes with investments that will span most, if not all, major industries. The investment practices followed by the foundation are common within colleges and universities as well as other institutional investors."

Steven Perfect, a finance professor at Florida State University, said investors have no control over the contents of individual funds, but said they can always choose to move to other mutual funds that more closely track their preferences.

A strict enforcement of the video’s divestiture goals would be a bit of a challenge, but is certainly possible at some cost, Perfect said. There are certain investment plans that offer investors carbon-free portfolios, for instance.

USF Divest said there are hundreds of campaigns going on nationwide and there are many examples of successful divestment efforts. For example, Columbia University divested from private prisons in 2014 by selling its stock in G4S, the world's largest private security firm, as well its shares in the Corrections Corporation of America (CCA).

What about those specific industries?

The foundation’s status under Florida laws and its wide-ranging investment techniques make it hard to pinpoint specific companies and industries where money is being invested.

The most recent document about the foundation’s investment decisions is from 2013.

Back in 2013, Ken Souza, the investment director of the USF Foundation, provided a list of investment managers that decide what mutual funds to invest in. Once they had the list of mutual funds, the group was able to look up the specific companies using the Securities Exchange Commission Edgar website.

This is what the group received: 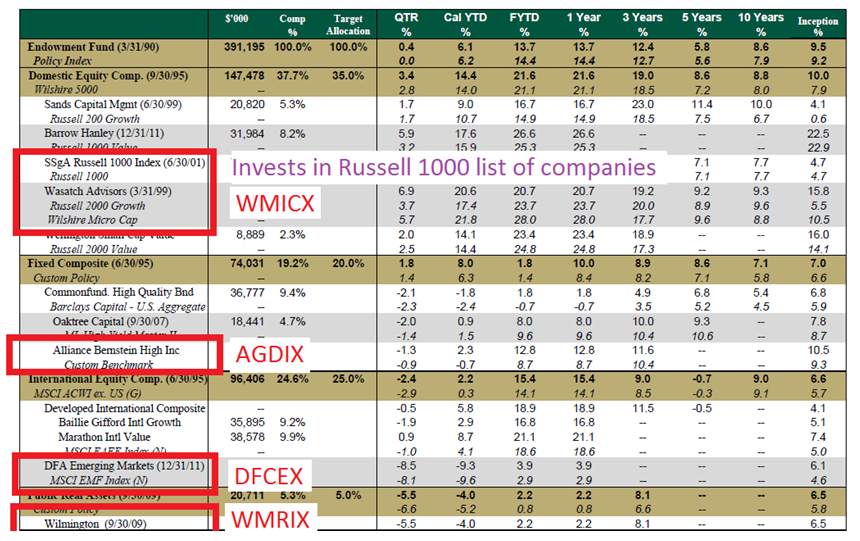 With the stock tickers, they were able to look at what companies those mutual funds invested in, which included British Petroleum (an oil company), Altria (a tobacco company better known by Philip Morris) and CoreCivic (a company that owns and manages private prisons and detention centers), to name a few.

We were able to confirm these companies on the SEC Edgar website. We noticed that portfolio holdings were even more diverse than what USF Divest highlighted.

USF Divest said it requested more up-to-date information from the foundation but never got it. We asked the university and the foundation, too.

Freeman said that the foundation does not have a publicly available document that would provide that level of detail like the 2013 document. (And he did not offer one up.)

As detailed in the Investment Prospectus, the endowment is invested with managers who specialize in specific asset classes. (An asset class is a group of securities that have similar characteristics and behaviors and is subject to the same laws and regulations.)

Perfect said the Foundation’s asset allocation plan suggests it’s investments are diversified, but said he can’t be certain without seeing what’s inside each asset class.

Based on a 2013 list of mutual funds that the foundation invested in, the claim holds water. The caveats are that the mutual fund managers directed where the money should be invested, not the foundation directly, and this investment is common and covers most industries represented on the stock market.